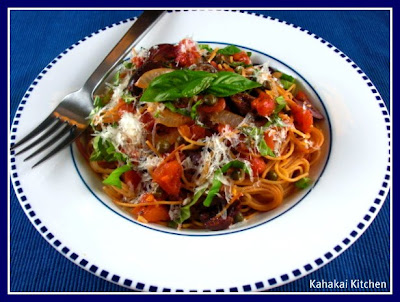 On the day she passes her dissertation defense, Olivia Tschetter's mother, the only member of her family who knew she was defending, passes away suddenly. Faced with grieving for her mother, Olivia doesn't tell anyone she has passed, even though her father, brother and sisters keep nagging her about it. Rather than go back to school to finish up, Olivia hides herself in her mother's kitchen, cooking from her old recipes, trying to finish the current edition of her mother's popular cooking newsletter and solving the mystery of a family secret. "Starting From Scratch" is the debut novel of Susan Gilbert-Collins, and it is an engaging story of loss and grief, the solace of the kitchen, and finding ones own way being the youngest in a family of academic overachievers. 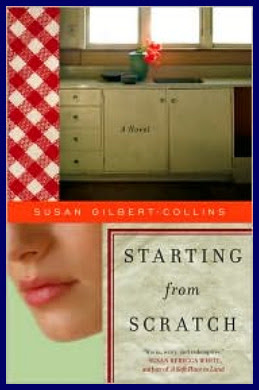 Sprinkled throughout the book are a few Tschetter family recipes, including Olivia's recipe for a grad school favorite, "Late Night Spaghetti."

Late Night Fried Spaghetti
From "Starting From Scratch" by Susan Gilbert Collins
("Serves 2-3 hungry grad students as a main dish")
"It's fast, it's delicious, and it only uses one pan: perfect for graduate students and other busy people. Don't slip the capers."
aprox. 3 Tbsp extra-virgin olive oil
1 medium onion, thinly sliced
1-2 cloves garlic, squashed and minced
1/2 lb uncooked spaghetti or vermicelli (go with imported)
1 1/2 cups water
1 (14 oz) can plum tomatoes, chopped with juice
at least 1/4 cup black olives, pitted and roughly chopped
3 Tbsp drained capers
hot red pepper flakes (to taste)
salt and pepper
1/4 cup chopped fresh basil
grated Parmesan cheese
Heat 2 Tbsp of the olive oil on medium-high in a large skillet. Saute onions and garlic until soft, about five minutes. Remove with a slotted spoon and set aside.
Add the last Tbsp olive oil to skillet and heat. If skillet isn't large enough to hold unbroken spaghetti (mine isn't), break the raw spaghetti in two. Place spaghetti in skillet. Saute for about five minutes, shaking the pan and stirring constantly, until some of the spaghetti strands start to brown lightly.
Add the onions and garlic, water, tomatoes (with juice), olives, capers, and red pepper flakes to taste. Season with salt and pepper. Cover and simmer over medium-low heat for about 12 minutes for spaghetti, eight or nine for vermicelli, stirring occasionally and checking for doneness. (Pasta should be tender but firm.) Toss in basil when spaghetti is almost done. (If using dried, add at the same time as other seasonings.) Serve with grated Parmesan. 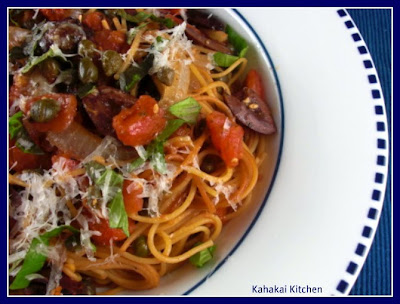 Notes/Results: Well, it wasn't late night when I made it, and I am not a grad student, but this was still a tasty, satisfying dish with lots of flavor. It is nice that it cooks in one pan and of course it had me convinced to make it at the mere mention of capers. ;-) I added extra garlic and may have been a bit heavy-handed with the red pepper flakes, as it was pretty spicy--but in a good way. Although a dish that can be made from pantry items, the fresh basil from my herb garden added a nice touch so I would highly recommend using it over dried. A glass of wine and a simple green salad made a tasty dinner, and the leftovers tasted great the next day. Good comfort food fare, I would make this again. 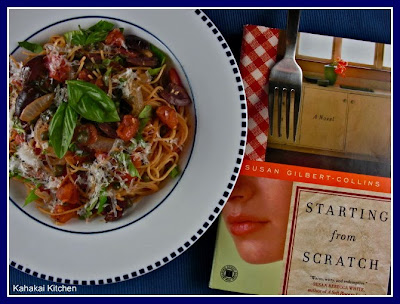