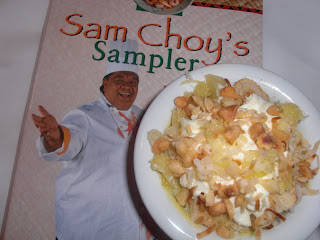 I had a great time doing my first Weekend Cookbook Challenge last month, so I decided to go for Round 2 since it is a great reason to pull out all those cookbooks and get creative. This month’s theme, hosted by its creator, Sara, at I Like to Cook , is TV Cooks; basically recipes from cooking shows or chefs from TV. I decided to go with well known Hawaiian chef, Sam Choy; known for being a founding contributor to Pacific Rim cuisine, having a homey, local style of cooking and the huge portions he serves at his restaurants. Sam currently has three restaurants, (two on Oahu and one on Guam) numerous cook books and has had his own television show, Sam Choy’s Cooking, since 1996. He has also guested on other shows like Iron Chef, Emeril Live, and Martin Yan’s Chinatown, thus easily qualifying him as a TV Cook.

I received one of his cookbooks; Sam Choy's Sampler as a gift a couple years ago and hadn’t really cooked anything out of it yet, but I had marked this recipe for Coconut Bread Pudding. Unusual for me since normally I am not a big bread pudding fan and it is usually one of my last choices on a dessert menu. On the other hand, I love all things coconut and something about the coconut milk and the toppings of coconut syrup, toasted coconut, pineapple and toasted Mac nuts sounded pretty good—how do you not love something drizzled with coconut syrup?

Garnish (Per serving)
2 Tbsp coconut syrup
Toasted macadamia nuts, chopped
Toasted coconut flakes
Pineapple, diced
Whipped Cream
Whisk eggs and sugar together. Add milk and coconut milk, and mix thoroughly. Layer bread, macadamia nuts, and coconut flakes in a 9x13-inch pan. Pour custard mixture evenly over top, and let custard soak into bread. Bake at 325° F for 45 minutes to 1 hour, until a toothpick inserted into the center comes out clean.
When serving, drizzle about 2 Tbsp coconut syrup over each portion. Top with a swirl of whipped cream. Sprinkle with diced pineapple, macadamia nuts and toasted coconut flakes.
Although the recipe called for a 9x13 pan, I decided it would be more fun to do them in ramekins (especially since I have a couple of sets of cute ones that I don’t get to use that often). Because of making individual puddings, I reduced the cooking time to about 30 minutes for my 12 (4 oz) ramekins. I also reduced the amount of coconut syrup to 1 Tbsp per serving in each ramekin. I used regular french bread for my pudding but when I make it again, I may try it with some Hawaiian Sweet Bread and see how that does. 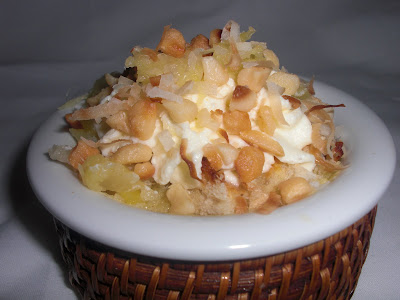 Garnish Notes:
Coconut Syrup—hopefully you can find this where you live because it’s sweet, gooeyness, totally makes the dessert.
Whipped Cream--I used my beloved Isi Whipped Cream Maker to make some Coconut Whipped Cream using a pint of whipped cream, 1 tsp powdered sugar and one tsp coconut extract). Can I just say: Yum!!!?!!! I may have to make coconut whipped cream for other desserts (because just spraying it directly from the Isi into my mouth is not cool and probably considered rude in most circles…)
Diced Pineapple—because I wanted small pieces for topping, I just thoroughly drained a small can of Dole diced pineapple in its own syrup and used that.
Toasted Macadamia Nuts--I bought unsalted roasted chopped Mac nuts and didn’t feel they needed any additional toasting.
Toasted Coconut—since I was using the oven to bake the bread puddings and I read you could toast coconut in the microwave, I decided to try it. Word of warning—instructions from two different sites said to place a thin layer of coconut in a microwave safe plat or shallow dish and toast about 3 minutes and the Pillsbury site said microwave on HIGH 4 ½-8 minutes! Because that seemed really long so I set the microwave for 1 minute, turned my back for about 35 seconds to get something from the cupboard and when I turned back around I had a plate of coconut burned in the center of the plate. I think my microwave is pretty normal and doesn’t burn like the fires from hell so I don’t how they do it??!! I found that nuking it for about 10-15 seconds at a time, making sure to stir the cocnut around in between each burst was much more effective. In the microwave the coconut sort of browns from the bottom first so it burns pretty easily if you aren’t careful. I had it pretty nicely browned and toasted in a bit over a minute by doing it that way.
Ice Cream—The cookbook states that at the restaurant this dish is served with a scoop of vanilla ice cream on top. I don’t think it needs the ice cream necessarily and since I made the small ramekins, I didn’t initially serve it with ice cream. On the other hand whether you need it or not, ice cream usually makes everything better. I tried some later with a scoop of vanilla Haagen-Dazs and I have to say it was pretty darn good having the interplay of the warm pudding and cold ice cream--either way, I think you will enjoy it! 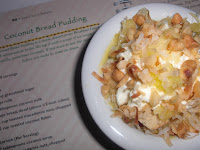 I would make this recipe again. It’s easy to put together, yummy and would be great for a gathering or with its tropical island vibe, excellent to make for guests staying with me.
Posted by Deb in Hawaii at 7:33 PM