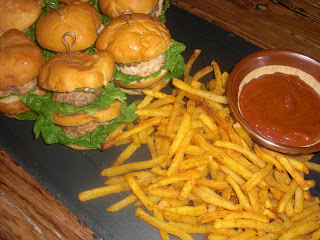 Blog Party is an event that I have wanted to take part of for awhile now. Hosted by Stephanie at Dispensing Happiness, each month has a theme and you have to make an appetizer and drink that match it. I was excited when I saw the theme of this month’s party, a Buffy the Vampire Slayer inspired event. For some reason I didn’t watch BVS, when it first came out but a few years ago ran across some episodes in syndication and liked it so much I kept watching. I can’t say that have seen every single episode but I think I have seen most of them by now.

So food and Buffy, hmm... I kept thinking of things I could make—mostly things that come in (S)layers—(S)layer cake, (S)layer dip, etc… but nothing seemed quite right. Then I finally thought of one of my favorite Buffy episodes: DoubleMeat Palace, where Buffy has to take a job at the aforementioned fast food restaurant; home of the DoubleMeat Medley: “A pure beef patty above the mid-bun…and a slice of processed chicken product below the mid-bun. Plus pickles and the secret ingredient.” (from the DoubleMeat Palace training video).

Since we are talking appetizers here I figured “Spiked’ DoubleMeat Sliders were the way to go. Spiked refers to the spikes holding these bad boys together—not added alcohol, also in tribute to Spike, my favorite BVS character. He has one of my favorite lines in the show: “Yeah, and you chose to be in the consumer service profession and I’m a consumer…Service me!”

I decided what better to accompany the sliders than some Garlic Fries (you need lots of garlic at a Vampire inspired party of course) with Hellmouth Dipping Sauce, a spicy curry ketchup with Sriracha chili sauce.

What to drink? Well at first I thought a Zombie would be a good match but in looking on Cocktail.com, I ran across the perfect beverage for the occasion, a little drink called the “Soylent Green” (A mix of blue Curacao, vodka and orange juice). Perfect since Buffy spends a good part of the episode trying to identify the secret ingredient in the DoubleMeat Medley and ends up at one point believing that it is people. Running into the DoubleMeat Palace dining room, she tries to warn all of the patrons “Its not beef it’s people! The DoubleMeat Medley is people!” (A nod to Charleston Heston’s lines in the 1973 movie Solyent Green—where the food product served in the future turns out to be made of people). 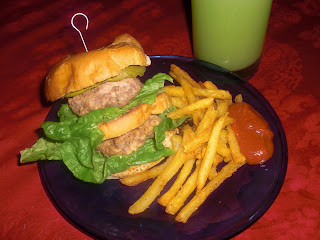 For my DoubleMeat Sliders, I stuck to the basic idea of a ground beef patty and a ground chicken patty, (no secret vegetable protein patties cooked in beef fat for flavor here!), with a toasted mid-bun seperating them. I made the mini patties pretty standard—salt, pepper, garlic (of course), and Worcestershire sauce with small round dinner rolls serving as the buns. Topping them were standard burger fixins of mayo, ketchup, mustard, pickles and lettuce. The “spikes” were turkey lacing spikes—to keep the layers together. I tried to find something that looked a bit scarier and "spikier" but couldn't locate anything.

Thinking about making two pounds worth of mini burgers and cutting and toasting all the the buns did not put me in the mood for making homemade Garlic Fries so for this I went pre-made. My garlic fries were aptly enough Ore Ida “Fast Food Fries”, which I doctored up with plenty of crushed garlic, garlic salt, paprika and pepper. Truth be told I am a bit of a wimp when it comes to setting my mouth on fire so although it had a nice kick to it, my Hellmouth Dipping Sauce was probably closer to "Heck Mouth" but you can easily add more Sriracha sauce to it if you really want to feel the burn.

The burgers were tasty although a bit unwieldy with all the layers. I wish they had photographed a bit better--still learning with the camera. The fries were nice and garlicky and the spices in the Hellmouth Dipping Sauce set them off nicely. I probably wouldn't get in the habit of ordering Soylent Greens but who could resist the name! The recipes for the dipping sauce and drink are below. (I'll trust you can make your own mini burgers and flavor your own fries!). 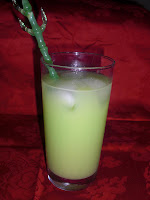 Shake all ingredients in a cocktail shaker with ice then pour into a collins glass filled with ice. 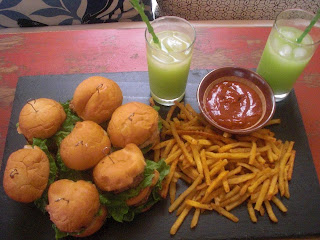 So it's off to the party. I can't wait to see what people came up with. Here's a toast to Stephanie for hosting and a great theme and a little more Buffy dialogue to leave you with...

DoubleMeat Palace Training Film:
"This cow ('moo!') and this chicken ('bawk!') don't know it yet, but they're destined to become part of it as well. So what happens when a cow and a chicken get together? Why, that's a Doublemeat medley! Let's take a look now at the process of harvesting these two special meats." (panicking animal sounds)

Manny the Manager: "Interesting, isn't it?"

Buffy: "Oh, yes! Like how the cow and the chicken come together even though they've never met. It's like Sleepless in Seattle if Meg and Tom were, like, minced." 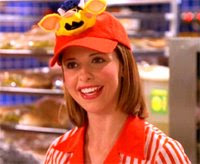