It's almost Friday! I am excited about that and the fact that I am today's TLC Book Tour stop for Mrs. Rochester's Ghost by Lindsay Marcott, a modern retelling of Jane Eyre.  Accompanying my review is a Shrimp Cobb Salad from a nearby restaurant and a recipe for one of my favorite Blue Cheese Salad Dressings. 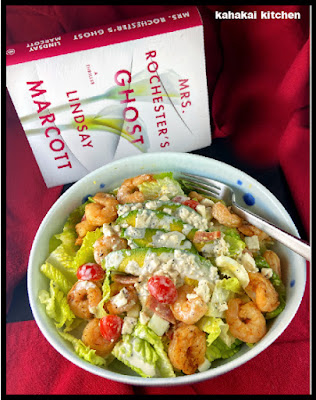 In a modern and twisty retelling of Jane Eyre, a young woman must question everything she thinks she knows about love, loyalty, and murder.

Jane has lost everything: job, mother, relationship, even her home. A friend calls to offer an unusual deal, a cottage above the crashing surf of Big Sur on the estate of his employer, Evan Rochester. In return, Jane will tutor his teenage daughter. She accepts.

But nothing is quite as it seems at the Rochester estate. Though he’s been accused of murdering his glamorous and troubled wife, Evan Rochester insists she drowned herself. Jane is skeptical, but she still finds herself falling for the brilliant and secretive entrepreneur and growing close to his daughter.

And yet her deepening feelings for Evan can’t disguise dark suspicions aroused when a ghostly presence repeatedly appears in the night’s mist and fog. Jane embarks on an intense search for answers and uncovers evidence that soon puts Evan’s innocence into question. She’s determined to discover what really happened that fateful night, but what will the truth cost her? 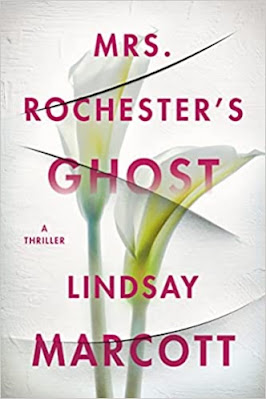 Hardcover: 398 Pages
Publisher: Thomas & Mercer (August 1, 2021)
My Review:
Although Jane Eyre and Charlotte Bronte does not garner the same level of love and devotion from me as Pride and Prejudice, Persuasion and Jane Austen do, I have always enjoyed it and have read it four or five times throughout my life. This made me more than happy to jump on the tour for Mrs. Rochester's Wife, the modernization of the classic novel. I love a good retelling--preferably where the author doesn't just pick up the novel and put it in a different time or setting, but rather one that reaches out and gives me another angle to explore.
Mrs. Rochester's Wife manages to keep the dark gothic vibe of the original, even as it moves the story to the dramatic and rugged coastline of Big Sur. Jane is now the unemployed writer of a gothic television series that was recently canceled--making it impossible to afford her rent. She is also recently an orphan, having lost her mother to cancer, and she also lost her boyfriend and best friend who together, betrayed her when her mother was sick. An old friend calls and talks her into leaving New York for California to take a summer job tutoring a notorious tech mogul's teenage daughter and living in a cottage on a massive coastal estate, she is unsure but low on options. Evan Rochester is darkly handsome, and is thought to have killed his mentally unstable wife Beatrice--although no one has been able to prove it. Jane begins to look for answers and finds herself falling for her employer at the same time.
The story is told both by Jane and in flashbacks of Beatrice Rochester which adds an interesting element, as she is quite mad and these bits are very dark and twisty. I liked how the Thorn Bluffs estate setting was brought to creepy and gothic life and how some of the supporting characters in Bronte's work were reimagined here. I did get annoyed a time or two by Jane and some of her actions, and at how quickly she fell for Evan, despiser her misgivings, his secrets and lies, and some pretty good evidence that at the very least, he may have driven his wife to drown herself. But, I get a bit annoyed at the original Jane Eyre too--so it wasn't a new feeling. For me, overall it worked and I had a hard time putting the last third of the book down. I think someone with an appreciation for the original novel (but who is also open to interpretations of it) will enjoy it and someone less familiar or completely new to the story will appreciate it as a slightly soapy and gothic mystery/thriller.
----- 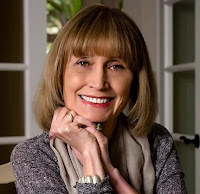 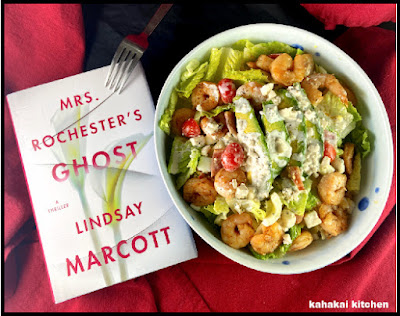 Set in Big Sur, California, salads seemed to feature heavily-- a crab salad for Beatrice, a Cobb salad Jane purchases on a first day there and various salads that Otis made. I decided on a Cobb salad--mainly because it sounded good for a hot and humid night. It has been a long and busy week, and even though a Cobb Salad is not at all difficult to make, I wanted someone to make it for me so I ordered one from a local restaurant/brewery by my house and ran in and grabbed it. I subbed in shrimp for the chicken and although I asked them to hold the bacon, it came with it.
But, because you probably come here for a recipe, I am including one of my favorite easy blue cheese dressing recipes, perfect for a Cobb salad. It comes from Ina Garten and I first tried it on her Crunchy Iceberg Salad with Creamy Blue Cheese, here. 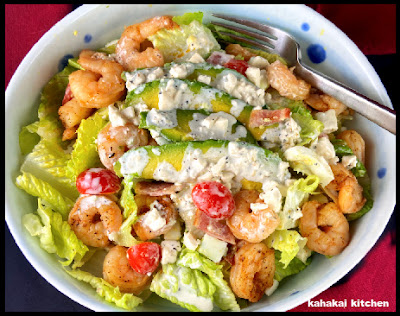 For the dressing, place 4 ounces of blue cheese in a small bowl and microwave for 15 seconds, until it begins to melt. Place the mayonnaise, yogurt, warm blue cheese, sherry vinegar, ½ teaspoon salt, and ¼ teaspoon pepper in the bowl of a food processor fitted with the steel blade and process until smooth. Set aside or refrigerate until ready to use. 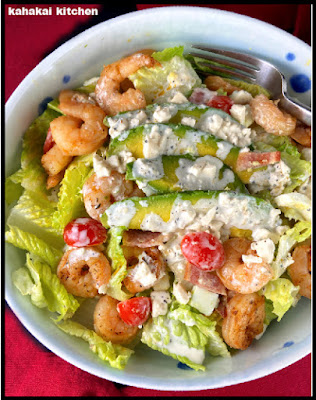 Notes/Results: Never underestimate the power of a good Cobb Salad. This totally hit the spot and I didn't complain that they left the bacon on. ;-) I will order it again.
Ina's dressing recipe above is pretty perfect too--just blue cheesy enough without being too overpowering and thick and creamy enough to be a dip or spread. If you love blue cheese, give it a try. 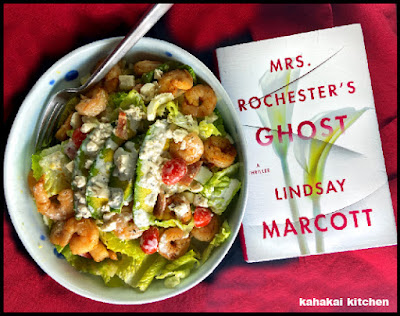 And of course a delicious salad and dressing has to get linked up here at Kahakai Kitchen for this week's Souper Sundays post, my weekly feature where anyone can share their soup, salad or sandwich recipes. Here's the link to this weeks post. 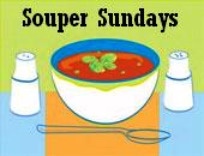 Note: A review copy of Mrs. Rochester's Ghost was provided to me by the author and the publisher via TLC Book Tours. I was not compensated for this review and as always, my thoughts and opinions are my own.