The Book Tour Stops Here: A Review of "The Stills" By Jess Montgomery, Served with a Recipe for Beet Pickled Hard-Boiled Eggs

I am very excited to be today's stop on the TLC Book Tour for The Stills by Jess Montgomery, the third book in her Kinship series. Accompanying my review is a recipe of purplish Beet Pickled Hard-Boiled Eggs, inspired by the book. 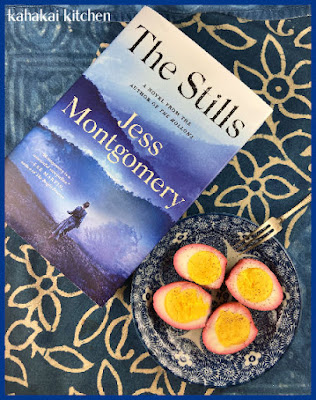 The third in Jess Montgomery’s exquisitely written Kinship series, The Stills is a triumph of storytelling by an extraordinary new talent in crime fiction…

Ohio, 1927: Moonshining is a way of life in rural Bronwyn County, and even the otherwise upstanding Sheriff Lily Ross has been known to turn a blind eye when it comes to stills in the area. But when thirteen-year-old Jebediah Ranklin almost dies after drinking tainted moonshine, Lily knows that someone has gone too far, and–with the help of organizer and moonshiner Marvena Whitcomb–is determined to find out who.

But then, Lily’s nemesis, the businessman George Vogel, reappears in town with his new wife, Fiona. Along with them is also her former brother-in-law Luther Ross, now an agent for the newly formed Bureau of Prohibition. To Lily, it seems too much of a coincidence that they should arrive now.

As fall turns to winter, a blizzard closes in. Lily starts to peel back the layers of deception shrouding the town of Kinship, but soon she discovers that many around her seem to be betraying those they hold dear–and that Fiona too may have an agenda of her own. 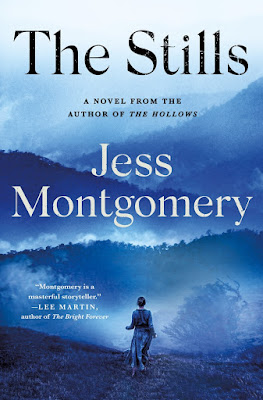 I am a big fan of the Kinship series, having been on the blog tours for the first two books The Widows and The Hollows. I love the intersection of two favorite genres--historical fiction and mysteries and, Sheriff Lily Ross, is a strong, female main character to root for, as are the other strong women in the book. Widowed in the first novel, Lily took over her husband's job as Sheriff of their rural Ohio community, no easy feet, especially in 1927 but Lily was reelected on her own merits last year. Lily's Thanksgiving with her family and friends, Marvena and Hildy and their families, is interrupted with news that a local boy is in a coma after drinking some local moonshine that puportedly came from Marvena's still. Complicating matters is the fact that George Vogel, a shady businessman who Lily has dealt with in the past is in town with his wife and seems to be up to something involving illegal alcohol distribution. The book's POV bounces back and forth mostly between Lily and Fiona Vogel, now George's wife, a former local girl and the widow of a local deputy. Fiona is brought to town by George but has a definite agenda of her own.

What I like most about this series is the well-researched history that Jess Montgomery weaves into  the story. I have learned a lot about Prohibition and other historical events from this series, and it usually has me looking for more information while I am reading it. The author works in historical figures (like the very real Assistant Attorney General Mabel Walker Willebrandt) into the books which it doesn't distract from the mysteries and teaches me more about history and subjects I am not familiar with. In this book I found the medical treatments of the times for diabetes and asthma especially interesting. Marvena's young daughter, Frankie, has severe and worsening asthma and part of the treatment is inhaling the smoke from asthma "sticks." Having asthma myself, the thought of breathing in the smoke from these medicinal cigarettes makes me cringe and I feel lucky to have a nebulizer and more modern treatments. I also love unpacking the layers of Lily and Marvena and getting to know more about these women and their friendship with each book. The writing is vivid and descriptive and puts me right into the setting. This third book did not disappoint in any way, and I can't wait for the next one! 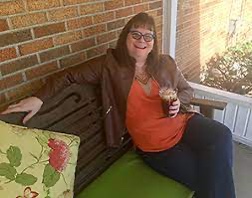 Author Notes: JESS MONTGOMERY is the Literary Life columnist for the Dayton Daily News and former Executive Director of the renowned Antioch Writers’ Workshop in Yellow Springs, Ohio. Based on early chapters of her novel The Widows, Jess was awarded an Ohio Arts Council individual artist’s grant for literary arts and the John E. Nance Writer-in-Residence at Thurber House in Columbus. She lives in her native state of Ohi

There was food to be found in The Stills--much of it related to the Thanksgiving holiday of the books time setting in 1927. Unfortunately, most of my food highlights in the later half of the book "disappeared" from the e-book advanced readers copy I was using so I am going to have to go from memory here. Food mentions included a bouquet of sage from the garden, sugar pumpkins and acorn squash, tomato vines and corn stalks, a quart jar of canned apples for pies, pumpkin pies, turkey, turkey broth, home-canned goods, dried grape bricks marked "Vino Sano Grapes" that could be reconstituted in water with sugar and made into grape juice if consumed within a week, or wine if left in a dark cupboard for three weeks (one of the work-arounds of the Volstead Act of Prohibition), moonshine, biscuits, corn pone, Ginger Ale, whipped cream, jars of blueberries and pickles, tea and toast, eggs, cornbread stuffing, mashed potatoes and gravy, green beans, pickled corn, rolls, soft butter that the children made by shaking heavy cream in canning jars, sorghum pie, turkey bone broth which will be made into turkey soup with homemade egg noodles, coffee, various teas, pickled red cabbage and sauerbraten, schnitzel, turkey sandwiches, and biscuits with jam. I'm sure there's more but that's all I got! ;-) 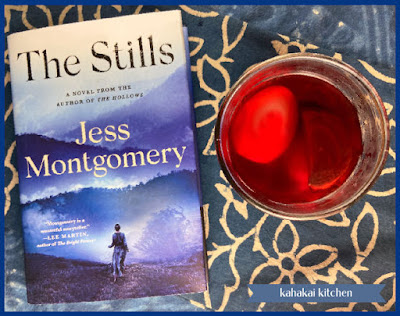 For my bookish dish, I decided to go with the beet-pickled eggs on Lily's Thanksgiving table: "...even pickled eggs turned purplish red from pickled beet juice. Usually those were saved for Easter, but Caleb Jr. had begged for them and finally Lily relented..." Since we are closer to Easter than Thanksgiving, it seemed like a good fit. I used a recipe from a favorite preserving book, Salt Sugar Smoke by Diana Henry to make my eggs. 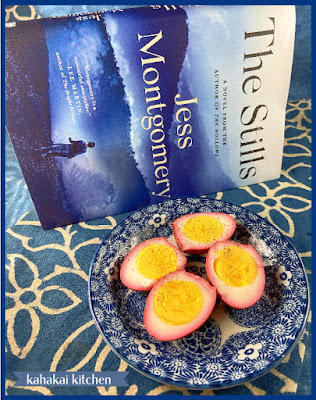 Boil eggs to your preference, then then drain, run cold water over them, and peel. Make a few punctures in each egg with a toothpick and set aside.

Mix together all of the rest of the ingredients in a saucepan and bring to a boil. Reduce the heating let simmer for about 15 minutes. Put the eggs into a sterilized jar and pour the hot vinegar over them. Seal with a vinegar-proof lid and once cool, keep in the refrigerator. The eggs will taste better after a couple of days. They'll keep--covered with the vinegar and refridgerated--for about a month. 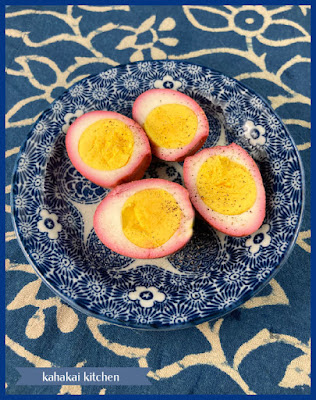 Notes/Results: I like pickled eggs they have a nice salty, sweet and acidic bite to them and a slight earthiness from the beets. I even like the rubbery texture the eggs get from the pickling--not chewy per se, but firmer than a regular boiled egg. My eggs were not perfect, most of the 5 I used ended up with flat bottoms which can be related to temperature going into the water, if the eggs are too cold and these were straight out of the fridge. It didn't effect the taste though and that's the important thing. I would make these eggs again. 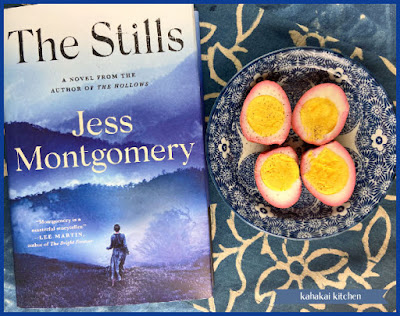 Note: A review copy of "The Stills" was provided to me by the author and the publisher via TLC Book Tours. I was not compensated for this review and as always, my thoughts and opinions are my own.