The Book Tour Stops Here: A Review of "The Widows" by Jess Montgomery, Served with a Recipe for Spicy Cinnamon Fried Apples on Toast {and a Book Giveaway!}

Happy Thursday! It's been a few weeks since I did a book review and so I am very happy to be today's stop on the TLC Book Tour for The Widows, a historical mystery novel by Jess Montgomery. Paired with my review are some tasty Spicy Cinnamon Fried Apples on Toast inspired by my reading, and there is a chance to win a copy of The Widows at the bottom of the post. 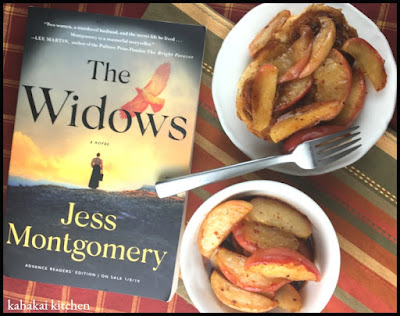 Kinship, Ohio, 1924: When Lily Ross learns that her husband, Daniel Ross, the town’s widely respected sheriff, is killed while transporting a prisoner, she is devastated and vows to avenge his death.

Hours after his funeral, a stranger appears at her door. Marvena Whitcomb, a coal miner’s widow, is unaware that Daniel has died, and begs to speak with him about her missing daughter.

From miles away but worlds apart, Lily and Marvena’s lives collide as they realize that Daniel was not the man that either of them believed him to be–and that his murder is far more complex than either of them could have imagined.

Inspired by the true story of Ohio’s first female sheriff, this is a powerful debut about two women’s search for justice as they take on the corruption at the heart of their community. 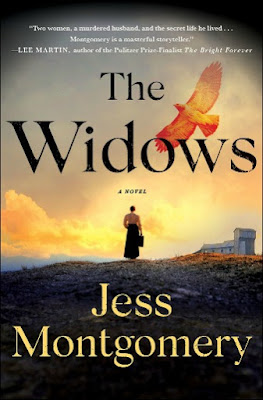 As you can probably tell by the number of historical novels I review on this blog, historical fiction is a favorite genre of mine, especially when it takes me into the past and to aspects of history that I am not familiar with. In the case of The Widows, I was transported to the Appalachians and rural Ohio coal mines in 1925 where I learned about the attempts to unionize the mines and provide the workers with fair employment practices and safer working conditions, all why trying to solve a murder and a disappearance in a book with two strong female leads, based on real-life women. The character of Lily Ross is loosely based on Ohio’s first female sheriff, Maude Collins, appointed after her husband was killed during a traffic stop. Jess Montgomery had her character face a similar circumstance but made the question of who killed Lily’s husband Daniel the main mystery the book is centered around. As she investigates his death, Lily discovers aspects of Daniel’s life hidden from her including Marvena Whitcomb, also a widow, with a past that intersects with Daniel’s. Marvena is leading the local miners and their families in battling Daniel’s half-brother and his mining company against their unsafe work practices, all too real to both woman as Lily’s father and  Marvena’s husband died in the mines while trying to rescue miners after a cave-in. Marvena’s character is also loosely based a real person, Mary Harris (Mother) Jones, the labor activist who co-founded the Industrial Workers of the World. Both lead characters are strong and doing what they need to do to take care of their families and communities. Lily steps into Daniel’s role of Sheriff while Marvena sells moonshine to support her daughter, Frankie. Marvena also spent time as a ‘working girl’ at the local boarding house, something her older daughter, Eula was doing when she turned up missing and Daniel was looking into her disappearance when he was killed, purportedly by Marvena’s brother Tom. Despite their dissimilar backgrounds, both women loved Daniel and find themselves working together and forging a relationship despite their differing backgrounds and economic levels.


I enjoyed the setting of the book and the way Montgomery wove the stories together, although The Widows isn’t a fast-moving mystery, it was absorbing and kept me engaged throughout. The mysteries—Tom’s death and Eula’s disappearance, were compelling, and while I guessed correctly about most of what happened, there were still some good twists to the story. I was interested in both Lily and Marvena’s characters and the fact it is a debut novel and is so well researched and written is impressive. I am happy to hear that The Widows is the first book in The Kinship Series and look forward to spending more time in the town of Kinship and its surrounding community. If you enjoy historical fiction, books set in rural Ohio and the surrounding area, stories with strong empowered female characters, mysteries, and learning more about American history, add The Widows to your TBR list. (You can enter a giveaway of a copy at the bottom of this post.)
-----

There is food to be found in The Widows, and often it helps to illustrate the difference in lifestyle for Lily and Marvena. While Lily's table is more bountiful--even what she cooks for the people in the jail's holding cells, Marvena is making due with less and its often food she gathers from the nearby woodlands--berries, greens, mushrooms, fiddlehead ferns, pokeweed, black raspberries, and the vegetables she grows in her small garden. Montgomery speaks in the afterward about the research she did to capture the experience of the Appalachians in Ohio in the 1920s from the scenes in the mines, life in rural communities, and of course the food. Lily's mother's Dried Apple Stack Cake is based on her family recipe. (Looking online for examples, the cake looked delicious but far too work-intensive for me to attempt to make this week.) ;-) My list of some of the food mentioned in the book included tinned milk, cheese, chopped steak, ice cream, coffee, biscuits and gravy, eggs, bacon, potato and onion, bologna sandwiches, an after funeral buffet of fried chicken, deviled eggs, ham salad, corn relish, and apple and peach pies, roasted chestnuts, peppermint and butterscotch button candies, good salt ham, fresh-baked bread, green beans and corn, black raspberry jam and apple butter, corn pone with sorghum syrup, buttermilk pie, broth and foot vegetables, muffins, tea--chamomile and sassafras (a favorite character Nana says, "Life is hard. Have tea."--something I agree with), squirrel stew with root vegetables, beets and spring peas, soup beans made with dried pinto beans, onion, bacon fat and water, taffy, cornbread, buttermilk, beef stew, deer jerky, carrots and green onions, fritters, a fried apple stack cake, canned peaches, pickles, and jams.

I ended up taking my inspiration for my book-inspired dish from a mention of apples fried up with brown sugar, butter and cinnamon that Lily serves to Marvena in the jail cell:

"Marvena snatches the plate through the food slot, carries it back to the cot, sits. She eats a bite of good salted ham. She has to keep herself from moaning with pleasure and relief. Next she takes a bite of apples, fried up with brown sugar and butter and cinnamon. Fancy, rich food. Marvena hates to admit it, but Lily's a good cook. She clears the plate quickly." 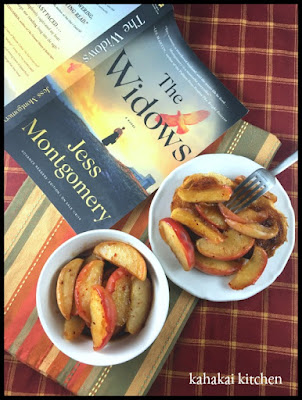 Although I kept the brown sugar, cinnamon and butter of the many recipes I looked at, I decided to add a pinch of salt and some (Aleppo) chile pepper to my apples, just to make them more interesting, and to serve them on thick slices of toast. 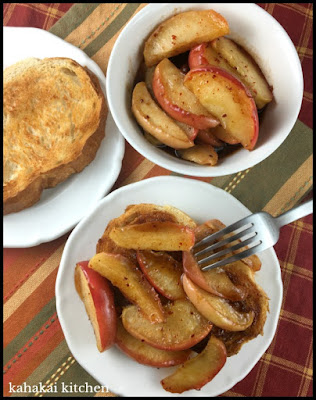 2 Tbsp butter
1/4 cup brown sugar
1 Tbsp ground cinnamon
1/2 tsp of your favorite chile pepper or cayenne (I used Aleppo pepper), or to taste
tiny pinch of salt
2 apples of choice (I used Gala), cored and sliced
bread and butter, if desired, to serve

Melt the butter in a large skillet over medium heat until it is melted and begins to bubble; stir the sugar, cinnamon, chile pepper and salt into the hot butter. Add the apples and cook until apples begin to break down and soften. (This can take anywhere from about 8 to 12 minutes depending on how thick you sliced them and how soft you want them--I like my apples to be tender but not mushy so mine took about 10 minutes.)

Toast bread and butter if desired. Serve with the apples and their juices spooned on top. Enjoy! 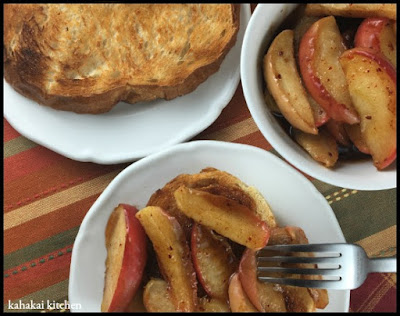 Notes/Results: I love apples just about any way they can be served and this simple preparation didn't disappoint. I liked the combination of the sweet and slightly spicy sauce with a touch of tartness from the apples. The Aleppo pepper was present and give a little kick and warmth, but wasn't too spicy--just the way I like it (though the fried apples would still be perfectly delicious without it). Spooned over the toasted bread these apples made for a tasty after dinner snack. I made enough apples for another serving and will probably top my morning oatmeal with them. I will definitely make them again. 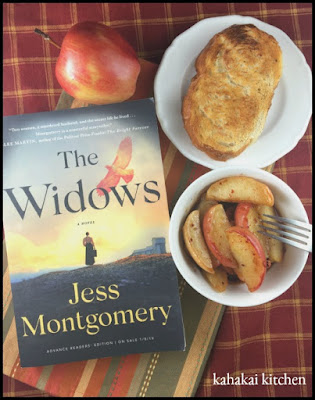 The publisher is generously providing a copy of The Widows to give away to a lucky reader (U.S./Canada addresses, please) here at Kahakai Kitchen.

To enter the Rafflecopter Giveaway below, leave a comment please (Because I like to read them!) ;-) telling me your favorite era(s) in history to read about and/or why you would like to win a copy of the book.

a Rafflecopter giveaway
Note: A review copy of "The Widows" was provided to me by the author and the publisher via TLC Book Tours. I was not compensated for this review and as always, my thoughts and opinions are my own.