Happy St. Patrick's Day! Since I don't eat meat, corned beef isn't making an appearance on my table today, but I am working in a couple of classic ingredients; cabbage and potatoes. I've chosen to give them an Italian spin with a cozy bowl of Diana Henry's Ribollita. Ribollita means twice-cooked or reboiled and it is a classic peasant soup from Tuscany that is a good use of leftover bread for a thick and hearty soup. 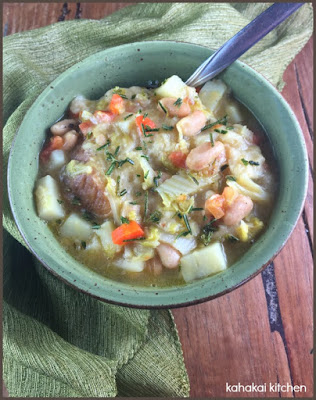 Diana Henry says, "I never liked the idea of ribollita--it is, after all, cabbage soup, and I've spent too much of my life on the cabbage soup diet--but this is a wonderful, rich, multi-dimensional dish. I learned how to make it (and how important the stock and olive oil are to the final flavour) on a cooking course in Florence. Don't rush it; make it with care and good ingredients and you will be rewarded. Made well, this is one of the world's great soups." 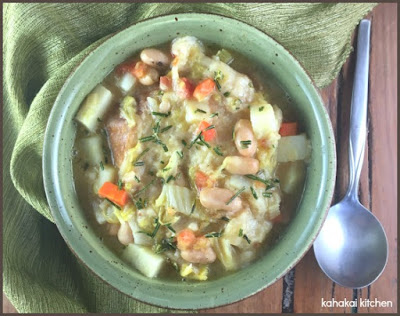 Cut the coarse central core from the cabbage, and slice the leaves. Melt the butter in a large, heavy pan and sauté the leeks and celery until pale gold, about 5 minutes. Add the carrots, cabbage or kale, and potatoes and cook for another 12 minutes, turning the vegetables over in the butter every so often. Add the stock, bring to a boil, reduce to a simmer and cook for 45 minutes.

Meanwhile, heat the olive oil in a pan with the rosemary and 2 of the garlic cloves (leave them whole and unpeeled). When the oil starts to shimmer and the ingredients turn light brown, remove from the heat and leave to infuse.

Toast the bread and rub each piece with the remaining garlic clove (peeled, this time). Add the beans to the soup and cook for another 10 minutes.

Drop the tomatoes into a pot of boiling water and leave for 10 seconds. Lift them out and rinse in cold water, then slip off the skins. Halve the tomatoes, scoop out the seeds (discard them), and cube the flesh. Add the tomatoes and flavored oil to the soup and taste for seasoning.

In another large saucepan, layer the soup with the bread (break it up to help spread it out) and leave to cool. Put the soup in the refrigerator overnight. The next day, bring it to room temperature, then bring to a boil again. Serve, drizzled lavishly with more extra-virgin olive oil.