British food has the best names--like bangers & mash, toad in the hole, Eton mess, spotted Dick, the list goes on and on... I am sure it is much easier to get a child to the table when you are making bubble & squeak rather than calling it fried cabbage and potato cakes. ;-) This week we are making foods that are 'Fit for a Brit!' at I Heart Cooking Clubs, finding and making Nigel Slater recipes for more traditional British fare. 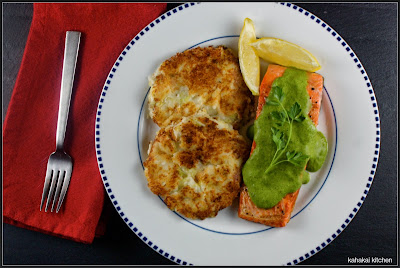 We are going traditional-ish here at Kahakai Kitchen. Nigel Slater's version of Cheese Bubble & Squeak from Tender adds a less common ingredient--goat cheese--to the potato cake mix. Nigel says that two of these patties with a spinach salad  are ample as a main course, but I was thinking they would be a happy side dish for some grilled salmon. White fish would have been more 'traditional' for a British fish dinner, and while I have cod in the freezer, I was feeling the salmon instead. To green things up a bit, I went back to the 'Uplifting Green & Piquant Sauce' from Nigel that I made for his '30-Minute Fish Supper' a few years ago when we read  "Eating for England" for Cook the Books. (Note: If delving deeper into the subject of British food interests you, Slater's 'Eating for England' is an entertaining and humorous romp that you should check out.) 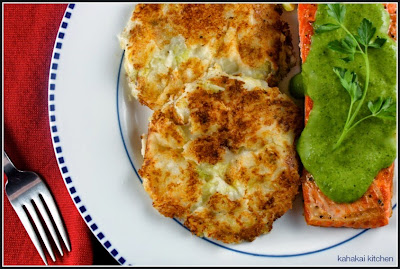 (From Tender) Nigel says, "Bubbles, squeaks and rumbledethumps: Colcannon, rumbledethumps, pyttipanna, biksmad, roupa velha, and stampot--the local names used throughout Europe intrigue and delight but they all describe the same thing, a stir up of potatoes and greens. In some cases, the two components are served freshly mixed; in others they are fried or baked to acquire a crust. Either way, this is good food at its most frugal. The ingredients may be cooked fresh or taken from yesterday's leftovers. Roupa velha is Portuguese for 'old clothes'.

"Bubble and squeak is generally shaped into rounds and fried in a pan, or left in one large cake, which looks splendid but is difficult to turn in the pan. Either way, the name comes from the sound it makes as it fries in the pan."

Mix the mashed potatoes and greens, then cut/crumble goat cheese into small pieces and add to the potatoes and greens. Season generously with salt, black pepper, and if you wish, a very little nutmeg. Stir in the tablespoon of flour.

Divide the mixture into fourths and shape each one into a rough patty 2 1/2 - 3 inches (6 to 7.5cm) in diameter and about 1/4-inch (6mm) thick. Put patties on a lightly floured plate, turning them once in the flour.

Put a thin layer of olive oil in a shallow, non-stick pan. Get it hot, then lower the patties into the pan and cook for about 4 minutes on each side, until golden and lightly crisp. Drain briefly on paper towels and serve. 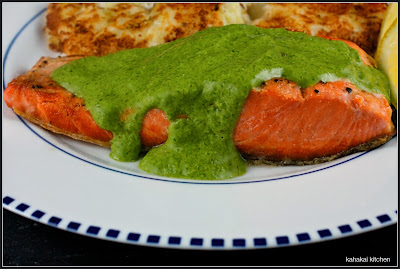 Uplifting Green & Piquant Sauce
Adapted from Appetite by Nigel Slater
(Makes about 3/4 cup)
A blender salsa verde is another idea. The piquancy of the capers and the saltiness of the anchovy are singularly appropriate with the white fish. My basic recipe is to whiz all of most of the following in the blender: the leaves from a large bunch of flat-leaf parsley and a few sprigs of mint, 6 anchovy fillets, a couple of cloves of garlic, a spoonful of Dijon mustard, a couple of tablespoons of capers, and 2 tablespoons of lemon juice. Now pour in enough olive oil to reduce it all to a lumpy slurry the color of that green stuff that floats on the pond in summer. Taste and check; you might find you want it with more mustard or lemon. 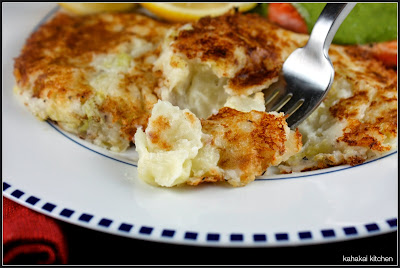 Notes/Results: Crispy, golden crust, soft and creamy within--these are some yummy little potato cakes. The bites of goat cheese add just the right amount of tangy to the mix. I'm not normally a nutmeg fan and Nigel has had me using it twice so far since it was in last week's pasta. I didn't use a lot of it in these cakes but I think it did give them a little something extra as it did in the Alfredo sauce. He may just convert me. ;-)

I would have been happy with the potato cakes as the entree, although they paired nicely with the salmon and sauce. The verde sauce stands up well to the salmon's flavor and the whole dinner worked well. In retrospect, if serving them as a side again, I would make the patties smaller. I didn't really measure/weigh my cabbage or potato, using one small head of savoy cabbage and a fairly large russet potato and I got six good-sized patties. I think some of the extras will be crisped up for breakfast tomorrow with a runny egg on top. A great use for leftover potatoes and greens but worth cooking them up for too, I will make them again. 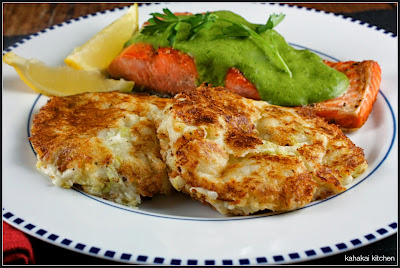 You can see what Nigel Slater dishes the other IHCC participants found Fit for a Brit! by checking out the picture links on the post. 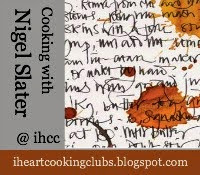