Vichyssoise and Toasts with Caraway and Cheese Spread: Cooking Retro for #TheLostFamilySupperClub -- Celebrating "The Lost Family" by Jenna Blum

I am very excited to join with a group of fantastic food bloggers and the wonderful BookClubCookbook.com for The Lost Family Supper Club, cooking fabulous dishes to celebrate the publishing of The Lost Family, a new novel by Jenna Blum. The book combines foodie fiction with historical fiction and it also has a big dose of family drama thrown in. 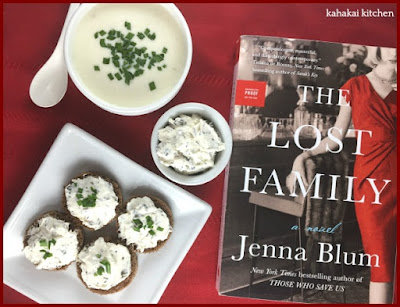 A Note from the Author, Jenna Blum:

The Lost Family is a novel about a German-Jewish Auschwitz survivor named Peter Rashkin, who emigrates to New York, starts a restaurant, and falls in love—only to find his new American family haunted by the wife and daughters he lost during the war. Really, Peter is like Ferdinand the bull, except instead of wanting to smell the flowers, all he wants to do is cook. He was training as a chef in Berlin when the Nazis came to power; in America, being in his kitchen at Masha’s, his 1965 Manhattan restaurant named after his lost wife, is his happy place. The menus in The Lost Family are a fusion of 1965-era favorites and German-Jewish comfort food, Peter and Masha’s favorite childhood dishes:  Masha’s “Little Clouds” (cream puffs with chocolate fondue),  Brisket Wellington, Chicken Kiev, and my favorite, Masha Torte—an inside-out German chocolate cake with cherries flambé. There’s also a Hamburger Walter, invented for news anchor Walter Cronkite when dining at Masha’s, served Au Poivre with No Vegetables At All.  (my dad was a newswriter for CBS and he told me this was how Walter liked his hamburgers.)


I LOVE FOOD, and I had a joyous time creating and kitchen-testing all the recipes for Masha’s menus in The Lost Family (there are two, Spring 1966 and Fall 1965). I relied on my German friend Christiane’s mother’s recipes, my childhood memories of my Jewish grandmother’s dishes, the Mad Men Cookbook and similar cookbooks from the 1960s, and ingredients from my garden. I worked in food service for many years as a waitress and a prep chef to subsidize my expensive writing habit, but I’m not a chef, so there were some notable cataclysms, for instance throwing ice cubes into the oven to create crispy baguettes for Peter’s crostini (explosions) and dropping an entire Masha Torte on the floor (flaming explosion; we ate it anyway, and it was good!).

Yet part of me has always wanted to be a restaurateur. When I was a child I had a restaurant in my basement called Faster in which I held my parents hostage. For The Lost Family my fiancé and black Lab were my taste testers, but they were much more willing than my parents and gladly ate all the recipes. The lusciousness of food, its importance as art form, comfort and sustenance, runs throughout the novel like the marbling of fat in a good steak. I hope you enjoy it, and the story of the Fabulous Rashkins, as Peter calls himself and his daughter when he’s teaching her to cook, as well. 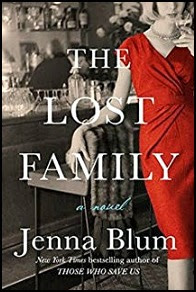 Although it flashes back to the 1940s and the World War II, The Lost Family is set primarily around three decades--the 1960s, from the point of view of Peter Raskin, the 1970s, from the point of view of his wife, June, and the 1980s, told from their daughter, Elsbeth's perspective. Peter lost his beloved wife Masha and his young twin daughters in the war when the Nazi regime took over Berlin and his horrific experience in the camps and their ghosts have never left him. He gets along by focusing on cooking at Masha's the Manhattan restaurant named for his wife. It is there he meets successful model, June Bouquet and eventually marries her. With the memories of his wife and daughter never far from his heart, he is not able to let June in, the way they both hope he will be able to and between that and June's inability to settle into motherhood, she is ripe for an affair with a young tennis pro at their New Jersey club. A young Elsbeth grows up with the issues of her parents setting her on a destructive path with an eating disorder and her own inappropriate romantic dalliance with a provocative photographer.

I will say that the first part of the book worked best for me. I felt for Peter's tragic past and hoped he would find some peace and contentment in his life. I had sympathy for June--having to compete with the family Peter lost and wanting more from her life, but I had a very hard time liking her once she started her affair and because of her relationship with Elsbeth and her negative impact on her--particularly when it came to Elsbeth's appearance. Elsbeth was also a bit hard to like, especially once she reached her teenage years and all of her drama, but her actions were easier to understand, based on her age and her upbringing. Jenna Blum does a great job describing the different eras with what was happening and the "vibes" of the time. Although the biggest focus on food is in Peter's section of the book--especially with Masha's, it appears throughout the story in family dinners and parties, eating out, in Peter's second restaurant and testing recipes for a cookbook he is writing and Blum describes it well. Her food descriptions made me hungry and made me want to head to the kitchen. Overall, I much liked The Lost Family and the time capsule of history it provided. Readers who like history, family drama and relationships and food should enjoy it.

For my book-inspired dish, I knew I wanted to make soup and there were a few to choose from. From Masha's restaurant Fall 1965 menu there was the Cream of Mushroom Soup with House-Made Croutons, Crème Fraîche, Brandy & Chives and from the Spring 1966 menu the Spring Pea Soup with House-Made Croutons, Crème Fraîche, & Fresh Mint. Then there were mentions of gazpacho and a tub of vichyssoise in the Rashkin's refrigerator. I thought about making the pea soup but I love potato soup and vichyssoise, and since we have had a warm and humid week here, it was the soup that called to me the most. 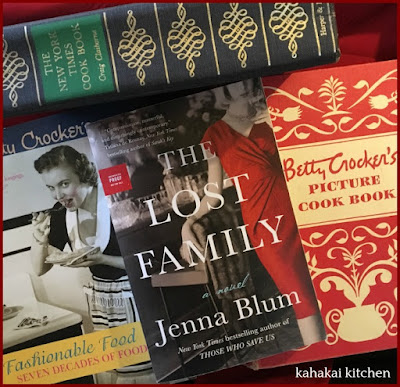 Even before I started the book, I was pulling out my vintage cookbooks to look for inspiration. I found it in two--Betty Crocker's Picture Cookbook (my copy is from 1950) and The New York Times Cook Book (1961). I had made the Vichyssoise A La Ritz from the NYTCB several years ago and so I turned to Betty Crocker and found a recipe there. 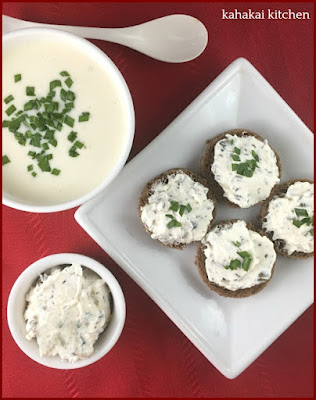 In the book, Elsbeth loves the dips and spreads that are at Ruth and Sol's--particularly the caviar spread, "...whose tiny eggs popped in her mouth with delicious flavor" and the scallion cream cheese. I'm not a big caviar fan myself but while perusing the appetizers in the NYTCB, I saw a "Caraway and Cheese Spread" with capers that I thought would be nice to serve alongside the soup--sort of a nod to Peter's croutons and Elsbeth's dips.

The book notes: "The faint flavor of nutmeg gives this soup special distinction when served by Gertrude McGee of Minneapolis, Minnesota." 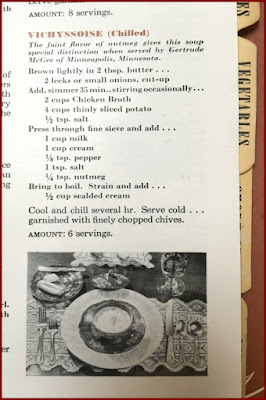 Combine all the ingredients and beat well with a fork or in an electric mixer until well blended. Serve on miniature rounds of rye bread. 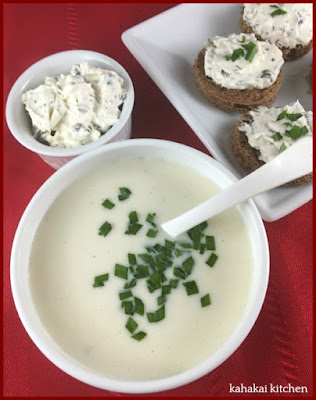 Notes/Results: Unlike Mrs. Gertrude McGee of Minneapolis, Minnesota, I am not much of a fan of nutmeg, but I did like her idea of giving the vichyssoise "distinction" so I replaced the nutmeg with celery seed. I really liked this soup--smooth, creamy and savory and perfectly refreshing on a hot day. I 'cheated' a bit and used the blender on my soup but then ran it through a fine sieve afterward to maximize it's smoothness. The cream cheese spread was excellent with it--the tangy, briny capers and slight bite of the caraway seed a good foil for the soup. Both the The Lost Family and these two delightful dishes reminded me that I need to pull out my old cookbooks more often. I would happily make both recipes again. 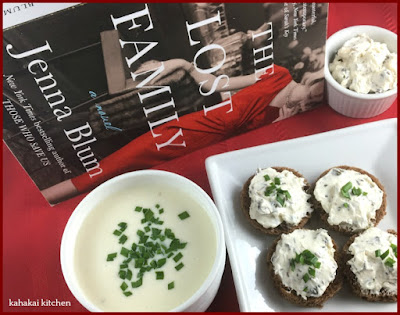 You can get more information on the book and the #TheLostFamilySupperParty here:

Many thanks to The Book Club Cookbook and to Jenna Blum for the copy of The Lost Family and a chance to join in. As always, I received no compensation for my review and my thoughts and opinions are my own. 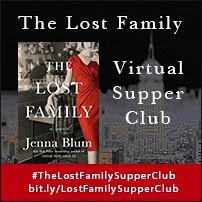 The Lost Family is my fifth foodie book entry for the Foodies Read 2018 event. You can check out the June 2018 Foodies Read linkup, hosted by Heather at Based on a True Story, to see what everyone is reading this month.

And, since it's Sunday, Judee is hanging out with me in the Souper Sundays kitchen--let's take a look!

Judee of Gluten Free A-Z Blog brought Roasted Carrot Hotdogs and said, "It looks like a hot dog-  but is it really  a roasted carrot ? Looking for a vegan and gluten free hot dog alternative for your next BBQ? Well first look in your refrigerator for a bag of carrots. Yes, marinated roasted whole carrots look like hot dogs and fit perfectly on a hot dog roll ( gluten free of course). Add some ketchup, mustard and even a little sauerkraut and you now have the star of the BBQ. Healthy, tasty, easy, gluten free and vegan!" 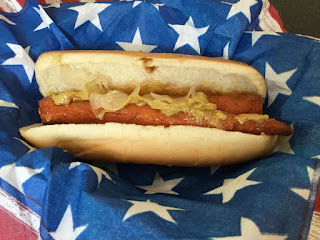