The Book Tour Stops Here: A Review of "The Almost Sisters" by Joshilyn Jackson, Served with a Recipe for No-Bake Lemon Icebox Pie

It's Wednesday and it's a bit hazy and humid. Not quite a hot and muggy Alabama summer, but still a great time to review a southern novel with summery feel like The Almost Sisters by Joshilyn Jackson. And, what better way to accompany my review than a slice of tart-and-sweet No-Bake Lemon Icebox Pie. 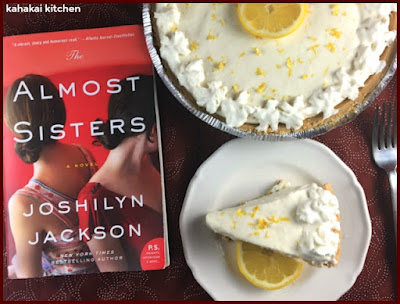 With empathy, grace, humor, and piercing insight, the author of gods in Alabama pens a powerful, emotionally resonant novel of the South that confronts the truth about privilege, family, and the distinctions between perception and reality–the stories we tell ourselves about our origins and who we really are.

Superheroes have always been Leia Birch Briggs’ weakness. One tequila-soaked night at a comics convention, the usually level-headed graphic novelist is swept off her barstool by a handsome and anonymous Batman.

It turns out the caped crusader has left her with more than just a nice, fuzzy memory. She’s having a baby boy—an unexpected but not unhappy development in the thirty-eight year-old’s life. But before Leia can break the news of her impending single-motherhood (including the fact that her baby is biracial) to her conventional, Southern family, her step-sister Rachel’s marriage implodes. Worse, she learns her beloved ninety-year-old grandmother, Birchie, is losing her mind, and she’s been hiding her dementia with the help of Wattie, her best friend since girlhood.

Leia returns to Alabama to put her grandmother’s affairs in order, clean out the big Victorian that has been in the Birch family for generations, and tell her family that she’s pregnant. Yet just when Leia thinks she’s got it all under control, she learns that illness is not the only thing Birchie’s been hiding. Tucked in the attic is a dangerous secret with roots that reach all the way back to the Civil War. Its exposure threatens the family’s freedom and future, and it will change everything about how Leia sees herself and her sister, her son and his missing father, and the world she thinks she knows. 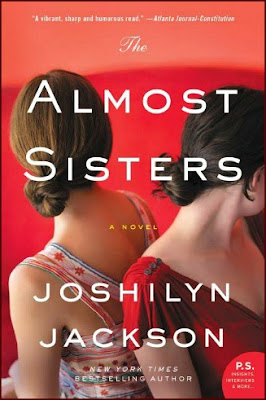 The Almost Sisters is my first Joshilyn Jackson novel, but I had heard great things about the book and her writing, so I assumed that I was in for a treat and I was. I loved the book and I think I found a new author to enjoy. The Almost Sisters is sweet, but a bit snarky, sentimental and touching, but without being too much so. Leia is the main character, a single, thirty-eight-year-old graphic novelist who finds herself pregnant by a one-night stand with Batman--or an attractive stranger dressed like him at a convention. She keeps the news to herself until her second trimester, when she's about to confess all at lunch at her 'perfect' stepsister's house. But before she can tell anyone, Rachel's unexpected marriage troubles and a plethora of calls and texts from people from the small southern town Leia's grandmother Birchie lives in interrupt her, and Leia finds herself headed to Birchville, Alabama with her thirteen-year-old niece, Lavender, in tow to hopefully sort it all out out. Things are worse than Leia expects when she discovers the truth about the disease that is taking the Birchie she knows away and some well-hidden secrets with big ramifications from Birdie's past come spilling out.

Leia is a delight of a character--prickly and funny, hiding a lot of hurts behind her art and the graphic novel she created and self-published that became a hit and now has her under contract to write a sequel. All the family drama isn't helping her creative block--from her secret pregnancy to Birchie's and Birchie's best friend Wattie's troubles, to her niece and Rachel--who heads down to Birchville to protect her daughter and escape her own issues. Leia has always lived under the shadow of Rachel and her strong personality and we don't get drawn into Rachel's life and character as much, but that's OK, because this is Leia's and ultimately Birchie's story. The supporting characters are quirky and interesting and the small southern town of Birchville is almost a character itself. I don't want to go into a lot of details beyond what I've shared and what is in the publisher's blurb because Jackson weaves together the characters and plot points so well and then unfolds the story and the secrets in such an appealing and engaging way, that you should just read it on your own. The whole memory loss and dementia aspects hit me a little hard at times--anyone who has dealt with an aging and ailing parent or grandparent can relate to that pain--but there is so much charm, humor and hope in the book, that the sadder moments didn't pull me down. I liked the glimpse of the south that Jackson gives through Leia--both the 'surface' south with all of its charm that Leia loves, and the more hidden south, with its prejudices and other issues that seethe below, and that she discovers when she looks at Birchville with new eyes. Although how Leia relates to life is through her love of superheroes and villains, art, graphic novels, and comics and that's not really a world I know much about, it isn't overdone and comes off as charmingly nerdy and fun.

The Almost Sisters drew me in from the start and kept me turning the pages. I'd gladly go back to Birchville and these characters again. This book has all the pleasure of a good summer read that sweeps you away, while still hitting on some tougher issues. I look forward to exploring more of Jackson's novels.

Author Notes: Joshilyn Jackson is the New York Times bestselling author of seven novels, including gods in Alabama and A Grown-Up Kind of Pretty. Her books have been translated into a dozen languages. A former actor, Jackson is also an award-winning audiobook narrator. She lives in Decatur, Georgia, with her husband and their two children. 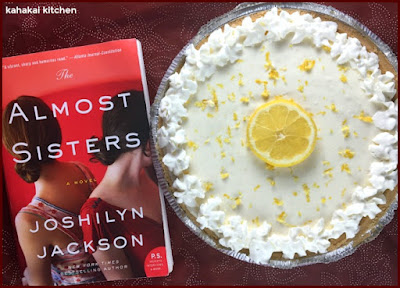 So I actually decided on icebox pie as my book-inspired dish within the first several chapters of the book, starting with the mention of the food at the annual church fish fry which goes awry when Birchie has a public meltdown. Later, Leia ruminates that it is hard to reconcile this ailing and different Birchie with the grandmother who made her icebox pie. I liked the idea of this southern staple dessert and have been meaning to make one. As I read on, I found that later in the book icebox pie is in a couple of more negative scenes and mentions. Ah well, I had already bought my ingredients and so we'll just think of the positive memories icebox pie had for Leia. 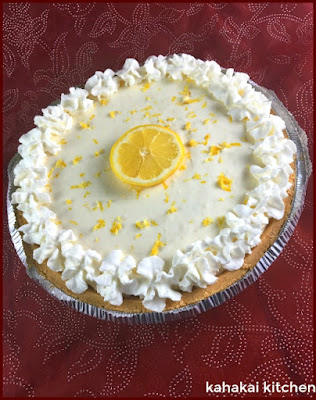 I found plenty of different recipes for icebox pie and quite a few for lemon icebox pies--which seems the most classic flavor. It's a busy and humid week here, so I looked for an un-baked version that was as quick and easy as possible. I ended up with a Betty Crocker recipe from the website that looked both simple and tasty. Although I have made and have no problem making a graham cracker crust, buying one was actually cheaper than buying a box of graham crackers that I likely wouldn't use the remainder of--and it shaved an hour+ off of my no-baking time. Plus, I watched The Kitchen on Food Network this weekend and Geoffrey Zakarian's tip for easy summer desserts was buying graham cracker pie crusts. I figure if an Iron Chef says to do it, I am OK. ;-) 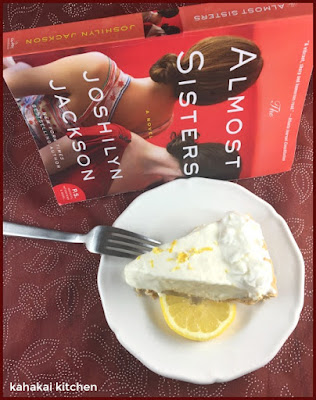 In large bowl, beat Filling ingredients until smooth. Spread evenly in crust. Refrigerate 4 hours but no longer than 8 hours.

Serve with whipped cream if desired. 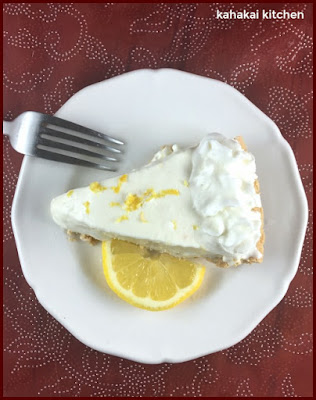 Notes/Results: It's really a shame that this pie is so good and so easy to make because I fear I may be making it again or dabbling in a variety of flavors of no-bake icebox pies this summer. There is just enough lemon in this one to make it tangy and refreshing, but the sweetened condensed milk sweetens it so it has a good balance. It also has a nice almost cheesecake like texture that I like. Since I was zesting lemons anyway, I zested all of mine before I squeezed them, added extra to the pie, and sprinkled some on top to garnish before freezing. I froze (instead of refrigerating) my pie about 5 hours before slicing (I was trying to catch decent light for photos) and it was just a bit soft. Since it was warm and pretty humid yesterday, my pie and my whipped topping rosettes got a bit melty quickly which is why some of the pics have slightly 'blobby'-looking whipped cream in them. Looks aside, it still tasted delicious. At about 7 hours of freezing, I inspected things (and maybe ate the first piece I cut and set aside...) and the firmness was optimal. The recipe says not to refrigerate it over 8 hours, but for me, I am going to leave it in the freezer as I like that almost-frozen texture. I would definitely make it again--probably with a homemade graham cracker or maybe a shortbread crust the next time. 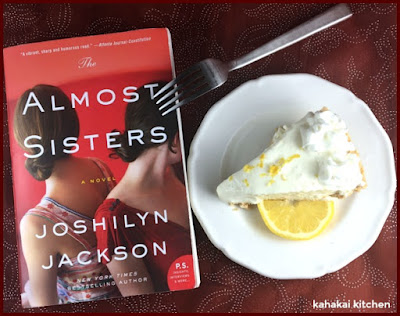 Note: A review copy of "The Almost Sisters" was provided to me by the author and the publisher, Harper Collins, via TLC Book Tours. I was not compensated for this review and as always, my thoughts and opinions are my own.