Here it is almost June and here I am ducking in at the last minute with my Cook the Books dish for this round's selection, Shark's Fin and Sichuan Pepper: A Sweet-Sour Memoir of Eating in China by Fuchsia Dunlop. It is my norm to procrastinate, even the rounds like this one where I am the host, but thankfully, I finished the book over the holiday weekend and found an easy but tasty recipe to make that may become a staple in my house. I'll call that a win. 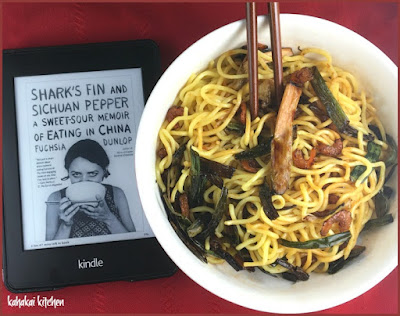 I picked this book because I heard so many good things about it. Fuschia Dunlop is a cook and food writer who spent about fifteen years cooking, living, traveling and eating throughout China. She starts with a trip there that turns into a research grant and ends up the only female student and first westerner at the famed Institute of Higher Cuisine in Chengdu in the Sichuan province. A self-described "adventurous eater" and "never one to turn down a taste of something new," Dunlop braces herself to eat whatever is put in front of her. All of that is very vividly described in this book, often in fairly nauseating detail. It is something that turned many of my fellow participants off of the book and it was something I was worried about--being a meat and poultry-free eater for the past several years--I wondered if I would be able to hack reading about bear paws, civet cats, deer's tail, camel's foot, sheep's stomach, and all manner of offal and so forth. Although the book might have gone a bit too heavy into the descriptions of the stranger and more disgusting (to me) foods at times, I found myself caught up in her insights into the food and culture of a country that I have only traveled and dabbled a bit in, years ago. 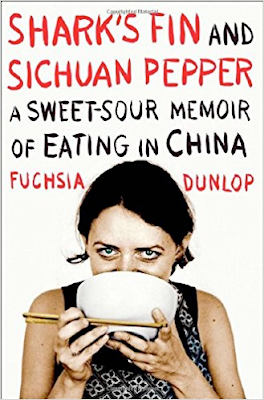 I could very much relate to Dunlop's try-anything-put-in-front-of-you policy. In roughly the same time period on the early to mid-nineties, I interviewed internally for a job training the operations teams and supporting the opening of American coffee shops in the Asia-Pacific regions. They were down to the final four candidates and I was the only one of the four who didn't have any International travel experience sans a couple of trips over the border to Vancouver BC. The president of the International division told me that although the team wanted me, he had huge concerns about picking me for the job because of my lack of travel experience and he grilled me about, of all things--my eating habits. "What do you eat?" "What foods do you hate?" "What won't you eat?" I stupidly bravely told him that I would try pretty much anything put in front of me and he made me swear I would.

I got the job and for the first couple of years I spent eating anything and everything put in front of me, and while I didn't eat nearly as many uniquely unpleasant things as Dunlop did, I did end up with things like thin slices of raw chicken in bowl (I thought it was sushi until I asked) and chicken "soft bone" (cartilage) and almost all other parts of the chicken at a yakitori restaurant in Japan (my American co-workers and I called it "the all things chicken" restaurant), frog legs, shark's fin soup, bird nest soup, & all manner of chicken feet dishes at a Chinese banquet in Singapore. Durian dozens of ways (oh, that smell!) in Singapore and Malaysia, Strangely-sauced and mostly unidentifiable offal dishes in Taiwan (honestly, when your hosts give you things and watch you eat them and then ask "Do you like it?" "No really...do you REALLY like it?" while snickering to each other, you find it's just better not to know what you just ate.) Nothing killed or almost killed me--except for some really bad food poisoning I got in Thailand one trip--ironically from the nicest restaurant we ate at. I also had some of the best and worst food of my life (worst award goes to uni {sea urchin} tarts in Japan--I just do not like the taste of sea urchin and I doubt I ever will) in some of these countries. After a couple of years of market visits with no "international incidents," I had enough credibility that I felt fine saying no to things I had tried before and didn't like or things I really couldn't or didn't want to eat. I think those experiences made me a better and more well-rounded eater in general. Even though I choose not to cook and eat meat and poultry now for many reasons, I will eat it if I need to in social situations, although I'll fill up on things I do eat.

So even though there were some paragraphs that made me squeeze my eyes shut and/or wince at while reading, I did ultimately enjoy the book. I won't call it my favorite foodie memoir, but I could truly relate to some of Dunlop's adventures in a foreign country, and as I only made one quick trip to Beijing and a couple of trips to Taiwan, I was very interested in her experiences in mainland China and I think she gave a through and entertaining account. 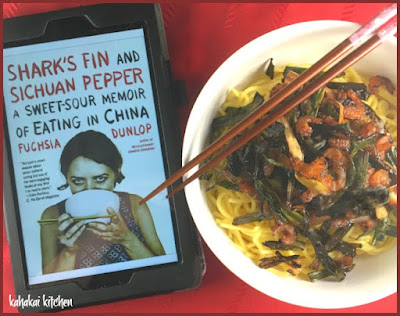 There are of course plenty of food mentions and food inspiration in the book although, as mentioned, some of the food had a gross-out factor. The bulk of the recipes included in the book featured meat or poultry which ruled them out for me. My thoughts turned to making veg-friendly versions of Mapo Tofu or Dan-Dan Noodles, both classic Sichuan dishes, but since I procrastinated and my fellow bloggers had already made such delicious looking versions, I decided to long for a different dish. I also did not make it to Chinatown to find Sichuan Pepper. (Yes, I know I had 2 months..) ;-) I ended up checking one of Dunlop's cookbooks, Land of Fish and Rice: Recipes from the Culinary Heart of China, out from my local library and found several dishes to try.

I was craving noodles and one recipe especially caught my eye, the Shanghai Noodles with Dried Shrimp and Spring Onion Oil. The recipe is not Sichuanese, but Dunlop does travel and talk about food throughout China in her book. I often see small bags of dried shrimp at my grocery store and think I should try cooking with them and this recipe combines the dried shrimp with spring onions into a savory oil that is stirred into noodles. An easy recipe with few ingredients is always a blessing for a procrastinator. I wasn't able to find the Shaoxing wine at the grocery store, but Dunlop notes that sherry can be used instead. 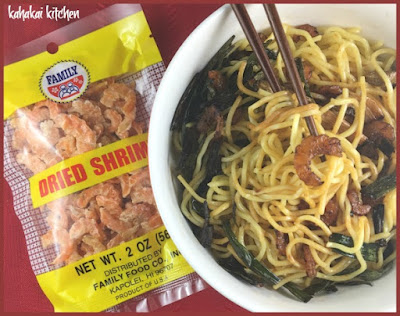 Dunlop says, “This Shanghainese recipe also appears in Every Grain of Rice, but I had to include it here because I find it one of the most indispensable Jiangnan recipes. The combination of oil infused with the fragrance of spring onion and dried shrimp and the umami savoriness of soy sauce is irresistible, however simple it sounds. ... I eat this dish so often that I have taken to making the flavored oil in large quantities and keeping it in the fridge—although I’m not sure it requires refrigeration. ... The recipe is said to have been invented by a street vendor near the City God Temple in Shanghai." 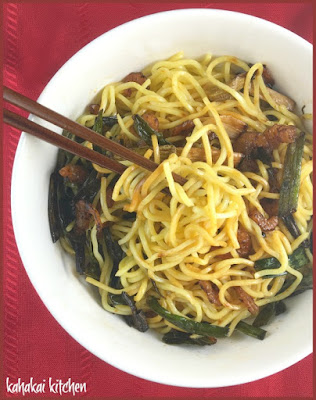 Put the dried shrimp in a small bowl with the Shaoxing wine and just enough water to cover them and leave to soak for half an hour. Smack the spring onions slightly with the flat side of a Chinese cleaver or a rolling pin to loosen their fibers, then cut them evenly into 2 ½ to 2 ¾-inch sections.  Pour the soy sauce into your serving bowl.

Bring a large pan of water to a boil and cook the noodles to your liking, then drain them well and put them in the serving bowl. Put the spring onions, shrimp and their fragrant oil on top and serve.  Mix everything together very well with a pair of chopsticks before eating.