The Book Tour Stops Here: A Review of "You All Grow Up and Leave Me" by Piper Weiss, Served with a Fuzzy Navel Cocktail

Happy Wednesday! I am happy to be today's stop on the TLC Book Tour for You All Grow Up and Leave Me by Piper Weiss, a book that mixes memoir with true crime. Accompanying my review is a Fuzzy Navel, a cocktail from my youth--inspired by a bottle of peach schnapps and the book. 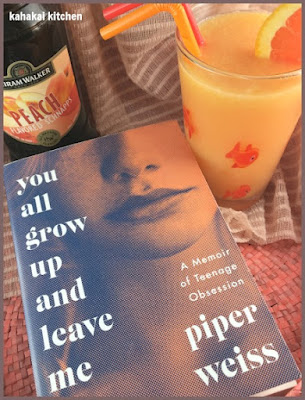 A highly unsettling blend of true crime and coming-of-age memoir—The Stranger Beside Me meets Prep—that presents an intimate and thought-provoking portrait of girlhood within Manhattan’s exclusive prep-school scene in the early 1990s, and a thoughtful meditation on adolescent obsession and the vulnerability of youth.

Piper Weiss was fourteen years old when her middle-aged tennis coach, Gary Wilensky, one of New York City’s most prestigious private instructors, killed himself after a failed attempt to kidnap one of his teenage students. In the aftermath, authorities discovered that this well-known figure among the Upper East Side tennis crowd was actually a frightening child predator who had built a secret torture chamber—a “Cabin of Horrors”—in his secluded rental in the Adirondacks.

Before the shocking scandal broke, Piper had been thrilled to be one of “Gary’s Girls.” “Grandpa Gary,” as he was known among his students, was different from other adults—he treated Piper like a grown-up, taking her to dinners, engaging in long intimate conversations with her, and sending her special valentines. As reporters swarmed her private community in the wake of Wilensky’s death, Piper learned that her mentor was a predator with a sordid history of child stalking and sexual fetish. But why did she still feel protective of Gary, and why was she disappointed that he hadn’t chosen her?

Now, twenty years later, Piper examines the event as both a teenage eyewitness and a dispassionate investigative reporter, hoping to understand and exorcise the childhood memories that haunt her to this day. Combining research, interviews, and personal records, You All Grow Up and Leave Me explores the psychological manipulation by child predators—their ability to charm their way into seemingly protected worlds—and the far-reaching effects their actions have on those who trust them most. 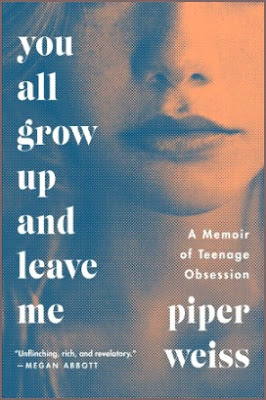 I love memoirs and I find true crime fascinating so I immediately wanted to read this book and be on the TLC Book Tour even though I only had a vague recollection of the Gary Wilensky case. I was in my late twenties, across the country, and focused on other things when in 1993, Wilensky attempted to kidnap a seventeen-year-old former tennis student and when he failed, killed himself. I had little in common with New York's Upper East Side teens and their lifestyles and private schools and tennis coaches. Piper Weiss, however, was in the middle of it all, a fourteen-year-old student of "Grandpa Gary" who was confused reconciling that Gary with the friend, mentor, and one of the few "adult allies" in her life. Also confusing for her--both then and today, are her feelings of being let down, that she wasn't the focus of Gary's so-called love.

You All Grow Up and Leave Me vacillates primarily between 1992-93 and 2014-16 and Weiss paints a picture of growing up on the Upper East Side where many people including Weiss's mother believes is the "safe" part of New York City. With prep schools and privilege and parents focused on getting their children the best help to stand out and be successful, it seems all to easy for Gary Wilensky to insinuate himself into society and become a successful tennis coach. Because of word of mouth and his own marketing skills, no one looked closely at his background and parents gave him access, often too much, to their daughters. It wasn't until his obsession with one of "Gary's Girls" made her uncomfortable that his behavior escalated into dangerous. Piper Weiss does a good job of building Gary's background and history--although I wouldn't have minded more information on him and the actual crime. I found myself pulling up some of the articles the Weiss mentioned to learn more, but really this story is Piper's--at least in this book.

Piper's story is both relatable and not. While her personality, family, and lifestyle were very different from mine, I think most anyone who is or was a teenage girl has had that feeling of not quite fitting in, being judged--by yourself, your friends, the boys you like, and wanting to be special and to be loved. I found myself at times both wanting to hug her and give her a shake. Both she and Gary Wilensky had (in her case, still has) their obsessions, but his came out in a chilling attempted crime and death by his own hand, while Weiss exorcises her demons by seeking to understand them and writing about them. She writes honestly, often poignantly, sometimes with dark humor, and in a way that is a bit unsettling--the memoir-leaning parts are a bit like looking into a teenager's diary and seeing more than you might have wanted to know. This book won't be for everyone, but I think it could lead to some interesting discussion. I found it unique and compelling and well worth reading.

Author Notes: Piper Weiss has served as editor in chief at Levo, editorial director for HelloGiggles, and features editor for the New York Daily News and Yahoo. She is the author of the book My Mom, Style Icon and has written for various publications, including Hazlitt, McSweeney’s Internet Tendency, Elle.com, and Refinery29. She lives in Brooklyn, New York.

You All Grow Up and Leave Me is full of candy and treats, alcohol and restaurant meals. In the nineties it's things like Whatchamacallit candy bars, Diet Coke, Red Vines, Sour Patch Kids and Gummy Bears. There are Mallomars and Sleepytime Tea, Tasti-D-Lite frozen dessert, spray butter, Diet Cokes, Zimas, pizza, and Fuddruckers. There are pigs-in-a-blanket, home-cooked meatloaf, carrots, roast chicken, corn-on-the-cob, and rye toast. Two decades later in present day it's a baba ganoush sandwich, boiling pasta, Genesee and whiskey shots, and Amatrician di tonno. There were popovers with strawberry butter from the Popover Cafe that I thought about replicating, but ultimately it was a bottle of peach schnapps that provided the inspiration for my food (or drink) pairing.

(p.103) "We sit on the floor facing a lit closet full of wine bottles. There are handles of vodka and gin, a blue bottle of Bombay Sapphire, a bottle of my father's Crown Royal preserved in its velvet bag. Forget those. We go for a dusty brown jug of peach schnapps. I first discovered it years ago when my mother rubbed a schnapps-soaked Q-tip on a sore on my tongue. The taste--syrupy, pungent, buzzy--was everything ice cream had been missing.

This is my bottle, the one my parents have forgotten about, and we swig from it before returning to my room to stash a mess of clothes in my closet. We take one last look in the mirror, first at ourselves, then at one another." 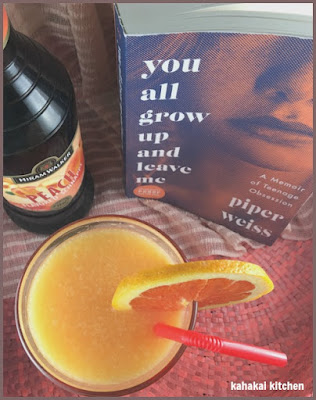 So at first I was going to make a Sex on the Beach cocktail (vodka, cranberry juice, peach schnapps, and orange juice) as it was mentioned a few pages later in the book but although I could relate to peach schnapps being Piper's introduction to alcohol, I came of age a decade earlier when Fuzzy Navels were popular and a simple, tasty cocktail to make for use underage and new to drinking--just get a hold of a bottle of peach schnapps and a gallon of orange juice and you were set. I decided that my book-related cocktail would have to be a Fuzzy Navel since I don't think I've had one in decades and I happened to have a bottle of peach schnapps leftover from when I got some to add to this Peach Iced Tea. ;-) There are recipes all over for Fuzzy Navels--many call for equal parts of the orange juice and peach schnapps, but since I was day-drinking yesterday afternoon I went with more orange juice. Usually it goes into a highball glass but I liked the way it looked in my favorite orange fish glass with matching straws. 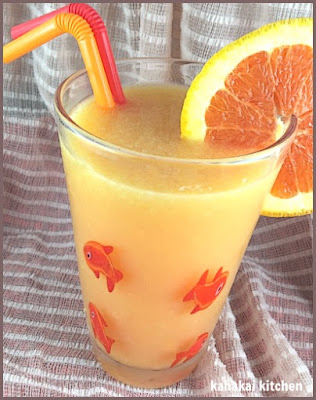 ice
3 oz Peach Schnapps, or more to taste
6 oz orange juice (I like it pulpy)
orange slice to garnish

Place ice, Peach Schnapps, and orange juice into a cocktail shaker and shake and strain into a highball glass or glass of choice. Garnish with an orange slice and enjoy. 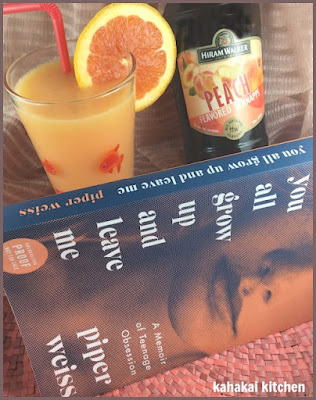 Notes/Results: A classic that takes me back to my youth. It's sweet but refreshing with the orange juice. Some people hate pulpy orange juice. I like it and I like how it adds a bit of 'body' to the drink--but you do you and use whatever orange juice and amount of schnapps you like. Yesterday was vacillating between rainy and sunny here and this drink makes me think of sunny, breezy days. I will make this again. 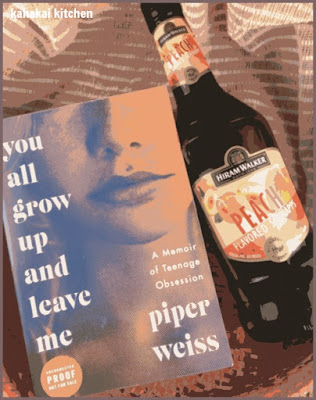 Note: A review copy of "The Wild Inside" was provided to me by the author and the publisher, Harper Collins, via TLC Book Tours. I was not compensated for this review and as always, my thoughts and opinions are my own.