The Book Tour Stops Here: A Review of "The Wild Inside" by Jamey Bradbury, Served with a Recipe for Easy Vegan Chili

Happy Aloha Friday! I'm kicking off the weekend by being a stop on the TLC Book Tour for The Wild Inside by Jamey Bradbury. It's a somewhat dark and spooky debut novel that just happens to be set in the wilds of Alaska, so I am accompanying my review with a warming bowl of simple vegan chili, made from the pantry and inspired by my reading. 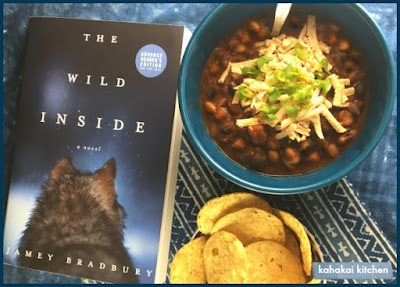 “The Wild Inside is an unusual love story and a creepy horror novel — think of the Brontë sisters and Stephen King.” —John Irving

A promising talent makes her electrifying debut with this unforgettable novel, set in the Alaskan wilderness, that is a fusion of psychological thriller and coming-of-age tale in the vein of Jennifer McMahon, Chris Bohjalian, and Mary Kubica.

A natural born trapper and hunter raised in the Alaskan wilderness, Tracy Petrikoff spends her days tracking animals and running with her dogs in the remote forests surrounding her family’s home. Though she feels safe in this untamed land, Tracy still follows her late mother’s rules: Never Lose Sight of the House. Never Come Home with Dirty Hands. And, above all else, Never Make a Person Bleed.

But these precautions aren’t enough to protect Tracy when a stranger attacks her in the woods and knocks her unconscious. The next day, she glimpses an eerily familiar man emerge from the tree line, gravely injured from a vicious knife wound—a wound from a hunting knife similar to the one she carries in her pocket. Was this the man who attacked her and did she almost kill him? With her memories of the events jumbled, Tracy can’t be sure.

Helping her father cope with her mother’s death and prepare for the approaching Iditarod, she doesn’t have time to think about what she may have done. Then a mysterious wanderer appears, looking for a job. Tracy senses that Jesse Goodwin is hiding something, but she can’t warn her father without explaining about the attack—or why she’s kept it to herself.

It soon becomes clear that something dangerous is going on . . . the way Jesse has wormed his way into the family . . . the threatening face of the stranger in a crowd . . . the boot-prints she finds at the forest’s edge.

Her family is in trouble. Will uncovering the truth protect them—or is the threat closer than Tracy suspects? 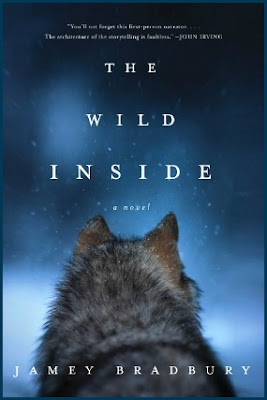 I admit it was the "an unusual love story and a creepy horror novel--think of the Bronte sisters and Stephen King" quote from John Irving that had me signing up for this book tour, then it was the gorgeous cover and Alaska setting that pulled me into the book. I'm not sure what I was expecting going into the book but it definitely is different--a bit horror, a bit coming-of-age, some family drama, a dash of suspense, and yes, a little romance. It's also hard to explain in much more detail than the blurb gives without giving away spoilers for the story that are best left to unfold on their own. I will say that this is wild country and the main character, Tracy is just as wild. She's much more comfortable sledding with her dogs and hunting in the isolated Alaskan woods than she is with people--including her father and younger brother. She grieves for her late mother, who she feels is the only one who understood her and who has left Tracy with many unanswered questions.

The story is at times quite dark, (remember 'creepy horror novel') so if you are someone who gets disturbed easily, this is probably not the book for you. Also, if a lack of quotation marks in books bothers you, you are not going to like The Wild Inside. The dialogue in the book doesn't have them, which does make it a challenge at times to figure out whether Tracy is talking to herself or to the other characters. Add to that Tracy's lack of grammar skills and it is an English teacher's nightmare (and no, that's not the horror I was referring to earlier). I think it kind of works here though, adding to Tracy's character and the tone of the book. I'm curious to hear the audio book to see how Tracy character is voiced.

I have long been fascinated by Alaska and sled dog racing and the Iditarod--the annual long-distance race from Anchorage to Nome, and I loved the glimpse into this world that the author provided. The beauty and isolation of the Alaskan wilderness is described in such a vivid way that it is almost a character. I also liked the author's ability to surprise me with the various twists and turns the novel took. There were a few things I saw coming but there were many more surprises. I found myself totally caught up in Tracy's world--even the more disturbing parts--and although I wouldn't call her exactly likable, I found myself rooting for her life to have a positive outcome and was sorry to see the book end.

The Wild Inside won't be everyone's cup of tea or cocoa (cocoa seems more fitting for the wintry feel of this book) for the reasons I mention above-but if you like very unique stories and characters, horror and slow-burning suspense, and books set in beautiful but spooky and remote locations like Alaska, you will enjoy it.

Author Notes: Born in Illinois, Jamey Bradbury has lived in Alaska for fifteen years, leaving only briefly to earn her MFA from the University of North Carolina, Greensboro. Winner of an Estelle Campbell Memorial Award from the National Society of Arts and Letters, she has published fiction in Black Warrior Review, Sou’wester, and Zone 3, and she has written for the Anchorage Daily News, TheBillfold.com, and storySouth. Jamey lives in Anchorage, Alaska.

The Wild Inside is pretty dark and there some parts that are definitely not appetizing, but there was still some food to be found in the book including; jerky, canned applesauce, tomatoes and raspberries (maybe canned as jam?), fruit, cookies, whiskey and chili, soda crackers, salmon, moose, steaks and burgers ("as bloody as you wanted them"), bread, unspecified leftovers, eggs, leftover beans, bacon, brownies, sandwiches, meringue, blueberry cobbler, rabbit, chocolate pie, pizza, hot cocoa/hot chocolate, moose stew, a dark chocolate candy bar, toast, vegetables for a salad, and elk meat.

Not being a meat eater and not needing a batch of brownies, cookies, or cobbler, I decided to make chili. In the book, Tracy's father cooks it. "He stirred a pot of chili on the stove, more beans than meat, but the room smelled spicy and rich as me and Scott set the table." Rather than 'more beans than meat'--I'd make mine vegan with no meat at all and serve it with tortilla chips rather than the soda crackers the Petrikoffs eat with their chili. 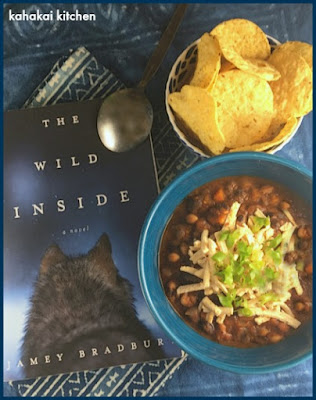 I get cravings for chili and tend to keep a few cans on hand for quick meals but honestly, I have yet to find a store-bought vegetarian or vegan chili that I really like. It all tastes like the cans to me, fake, too salty, and not fresh. I am always more satisfied when I take the time to throw a simple chili together and it's a great way to use up the extra cans of beans in my cupboard, fading vegetables from the crisper drawer, and play with my spices. I had purchased some Daiya vegan cheese when Whole Foods had it on sale a couple of weeks ago and I also had a half-bag of tortilla chips to use up. I used a mix of beans and boxed crushed fire-roasted tomatoes, plus a variety of spices to give it some complexity. 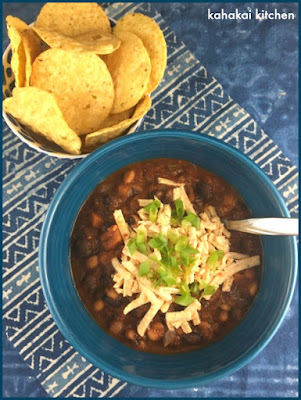 In a large heavy pan, heat oil over medium heat. When hot, add onion, carrot, and celery and cook about 5-6 minutes, stirring occasionally until onions are translucent and vegetables begin to soften. Add the garlic, chili powder, cumin, oregano, smoked paprika, and celery salt and cook for another minute, or until spices are fragrant.

Add the crushed tomatoes (or the diced tomatoes with their juices), broth, soy sauce/tamari and liquid smoke, stir and bring to a simmer. Cook at a gentle simmer, stirring occasionally, for 30 minutes, or until vegetables are tender. Stir in the jalapeno juice and sea salt and black pepper to taste. 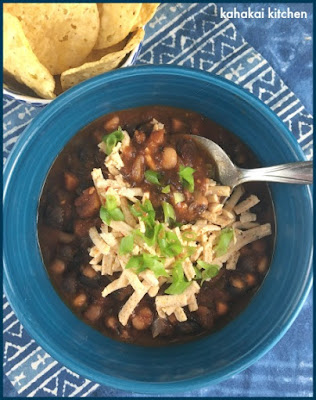 Notes/Results: I was really happy with this chili. It hit the spot on a grey, rainy day. Although made mostly from cans/boxes in the pantry, the combination spices and additions of liquid smoke, tamari/soy sauce, and jalapeno juice give it a fresh taste with depth of flavor. It also has a smoky, meaty vibe from the cumin, smoked paprika and liquid smoke. Play around with the spices you have and the heat level you like. I use a chipotle-garlic blend which isn't mouth-burning hot, along with some Aleppo pepper and find this chili to have some heat--especially on the end notes, but it's not too hot. I would happily make it again. 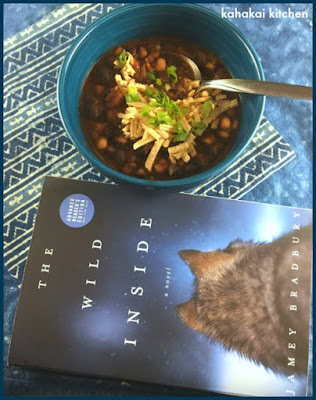 I'm also linking this tasty chili up to Souper Sundays here at Kahakai Kitchen. Each Sunday we feature delicious soups, salads, and sandwiches from friends around the blogosphere--please join in if you have any to share. Here's this week's post and linkup.

Note: A review copy of "The Wild Inside" was provided to me by the author and the publisher, Harper Collins, via TLC Book Tours. I was not compensated for this review and as always, my thoughts and opinions are my own.