This was our last week cooking with British Chef Hugh Fearnley-Whiitingstall at I Heart Cooking Clubs before switching to cooking with The Barefoot Contessa, Ina Garten on Monday. I'm sending Hugh off with one last recipe, his Celery Root Soup from River Cottage Every Day and recapping the past six months by picking my five favorite Hugh recipes, plus one bonus favorite. 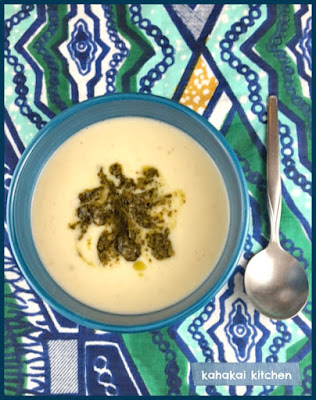 Celery Root is one of those ingredients I often overlook in cooking. It sits there at the grocery store looking like a big ball of dirt, but the flavor, once it's cleaned up (the tough skin peeled or sliced off and the root well-cleaned, it is easy to work with and it adds a delicious celery-herbal flavor. I was going to make the Parsley-Walnut Pesto that Hugh recommends as a topping, but laziness and a jar of pesto I had on hand won out. ;-) I also chose to make the soup vegan and non-dairy by using vegan butter and non-dairy soy creamer. My changes are in red below. 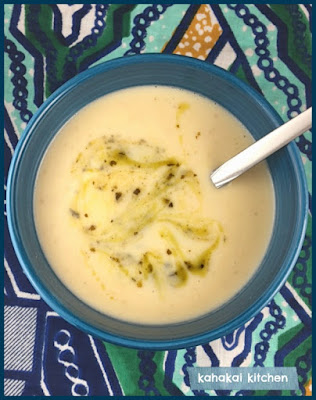 Hugh says, "Given its humble ingredients, this soup has a surprisingly sophisticated flavor. Celery root's earthy intensity and velvety texture are wonderful combined with the spicy, salty, or sweet finishes, and a swirl of parsley and walnut pesto works very well too."

Melt butter in a large heavy saucepan. Add the celery root, leeks, potato, onion and garlic; season generously, then cook for about 10 minutes, until the vegetables start to soften.

Add the stock, bring to a boil, then turn down the heat and simmer for 20 to 25 minutes, until the celery root is tender.

Puree the soup in a blender and return it to the pan (or use an immersion blender to puree it in the pan). Reheat gently. If the soup is too thick, thin it with some water or stock, though remember you may be adding cream.

Just before serving, check the soup for seasoning and stir in the cream if you want to enrich it a little.

Besides pesto, these are Hugh's suggested toppings: 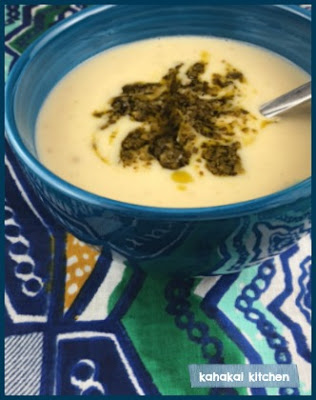 Notes/Results: This is a creamy and tasty soup with a slight celery-ish flavor. The potato and leek/onion comes through too but the celery root is really the star. Rather than try to peel it, I followed an online tip and cut the skin off which made it pretty quick and easy to prepare. The beauty of pureeing in this soup is that nothing has to be beautifully cut and can all be coarsely chopped. The pesto was perfect swirled into the soup--added a bright pop of color and flavor. I still want to try his buttery-apple topping and will do that with my leftovers. A good dish to go out with Hugh on, I would happily make it again. 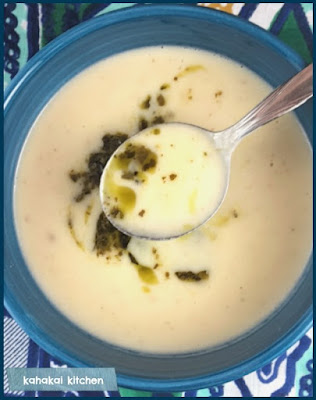 As promised, here are my favorite five Hugh recipes cooked during the past six months. I liked all of the recipes I made with Hugh but these six are the ones I thought of and craved after. I also added another Hugh favorite cooked before our time with him as a bonus. 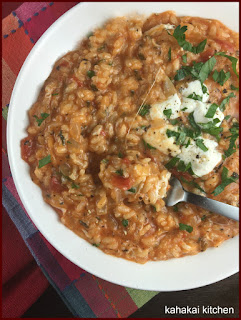 Hugh's White Bean and Leek Soup with Chili Oil really elevates a simple bean soup and adds complexity and a kick of heat. I made mine vegan and loved noshing on it all week as the flavors only got better. 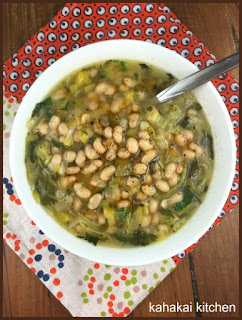 Lemony Zucchini on Toasted Bread is a great way to use up an abundance of zucchini. The lemon, garlic and thyme combination brings wonderful flavor to the squash. I made this recipe several times and even added in to pasta for a change from the bread. 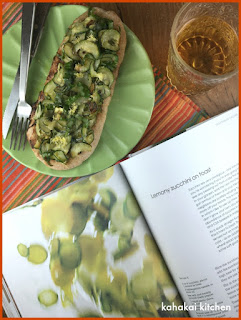 I make a lot of lentil soups but I really liked the flavors in Hugh's Red Lentil Soup with Caraway and Minted Yogurt. I wasn't feeling good when I made it but it was simple to toss together, tasted great, and made me feel nourished. 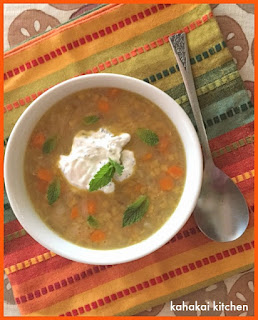 This recipe for Crudités with Garlic and Anchovy Dressing is great both for as a dish with the grilled veggies and as a salad dressing for greens. It has strong Caesar salad like flavors and backs a good garlic punch. 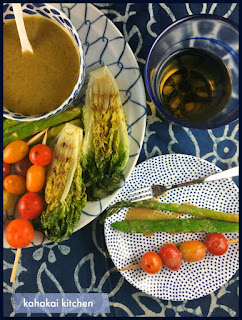 OK, this last one was made before we starting cooking with Hugh but it was such a great recipe (I did make some small changes) that I had to include it as a bonus--Zucchini and Goat Cheese Soup with Basil & Lemon. Rich, decadent, and one of my favorite zucchini soups. 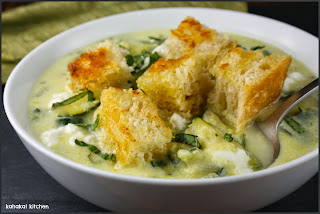 There you have it, some fabulous Hugh recipes. You can see how everyone sends him off at IHCC by checking out the picture links on the Goodbye Hugh! post. 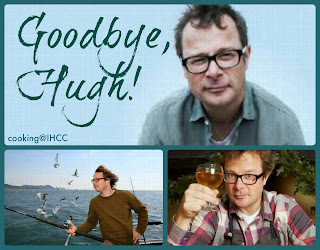 Debra of Eliot's Eats shared Herb-Vinaigrette Potato Salad and said, "This is a great way to celebrate early produce from the garden. To add some more crunch, sprinkle with croutons.  (This recipe is featured in Taste of Home’s Holiday & Celebrations, 2017)."

Judee of Gluten Free A-Z Blog made Vegan Lentil, Leek, and Potato Soup this week and said, "Lentils, leeks, and potatoes are the key players in this tasty autumn soup which is both naturally gluten free and vegan. ... I like my soups on the chunky side and unblended, but feel free to blend this soup into a creamy mixture using an immersion blender or Vitamix." 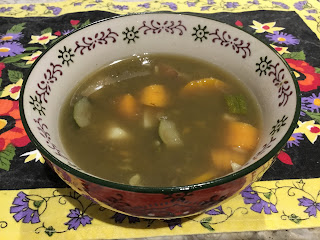 Shaheen of Allotment2Kitchen shared Balsamic Beetroot Orzo Pasta Salad with Green Beans and said, "I have made an Estonian Beetroot and Potato Salad, and this simple Beetroot Orzo Pasta and Green Bean Salads for work. I have mentioned in previous blog posts, that week after week I make the same salads, so its nice to vary with the changing seasons." 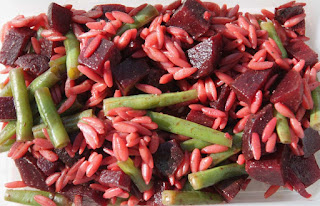 Finally here at Kahakai Kitchen I made an easy and delicious Caramel-Apple Jam and served it as open-faced sandwiches on fresh sourdough bread with cheddar cheese, inspired by Farmer Boy by Laura Ingalls WIlder for Cook the Book. Although the jam has many tasty uses, it made a wonderful sandwich. 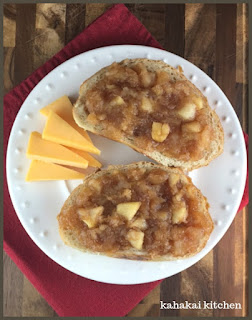