The Book Tour Stops Here: A Review of "The Crows of Beara" By Julie Christine Johnson, Served with A Toasted Cheese and Apple Jam Sandwich

I'm excited to be on the TLC Book Tour for The Crows of Beara by Julie Christine Johnson, a novel set on a remote peninsula in Ireland and featuring romance, a fight to save the environment and endangered birds, and a bit of local lore and magical realism thrown in. I'm pairing my review with a delectable Toasted Grilled Cheese and Apple Jam Sandwich inspired by my reading. 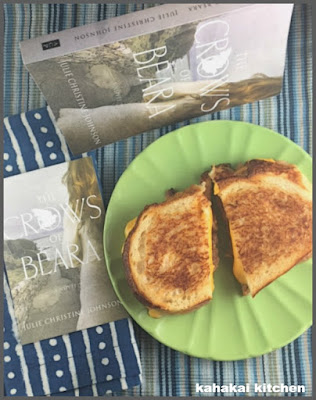 Along the windswept coast of Ireland, a woman discovers the landscape of her own heart.

When Annie Crowe travels from Seattle to a small Irish village to promote a new copper mine, her public relations career is hanging in the balance. Struggling to overcome her troubled past and a failing marriage, Annie is eager for a chance to rebuild her life.

Yet when she arrives on the remote Beara Peninsula, Annie learns that the mine would encroach on the nesting ground of an endangered bird, the Red-billed Chough, and many in the community are fiercely protective of this wild place. Among them is Daniel Savage, a local artist battling demons of his own, who has been recruited to help block the mine.

Despite their differences, Annie and Daniel find themselves drawn toward each other, and, inexplicably, they begin to hear the same voice–a strange, distant whisper of Gaelic, like sorrow blowing in the wind.

Guided by ancient mythology and challenged by modern problems, Annie must confront the half-truths she has been sent to spread and the lies she has been telling herself. Most of all, she must open her heart to the healing power of this rugged land and its people.

Beautifully crafted with environmental themes, a lyrical Irish setting, and a touch of magical realism, The Crows of Beara is a breathtaking novel of how the nature of place encompasses everything that we are. 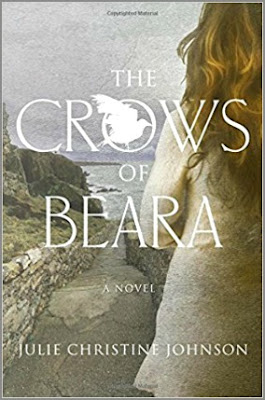 The more books I read about Ireland--especially the ones featuring remote locations and quaint villages--the more I want to travel there. The Crows of Beara made that urge all the stronger with its setting on the Beara Peninsula. It is described so well and with such appreciative detail by the author that I could picture the rugged and rocky coastline and verdant green hills in my mind. Annie is recently out of rehab (not much of a spoiler as we find out that information pretty quickly). Her alcoholism and her actions have made her job and marriage suffer and neither seems repairable. Wanting to escape her life in Seattle, she convinces her boss to give her a key project in Ireland spinning the building of a copper mine along the lush peninsula and promoting the jobs and income it will bring to the community to pave the way for the client to move forward. Annie hopes this opportunity will give her back her edge, but once she is back in Ireland and learns what the mine will do to the environment--especially the endangered Red-billed Chough that call the peninsula home, she begins to doubt her choices. Meanwhile she meets Daniel, a local hiking guide and metal sculptor who has his own past and mistakes to get beyond. Annie and Daniel are attracted to each other and they both hear a mystical, seemingly ancient Irish voice that calls to them. The voice seems to be related to the local legend of The Hag of Beara and it's the mystical realism portion of the book. The author has managed to weave the voice and the legend into the story in a way that fits the mood and setting and leans toward believability versus being too "woo-woo."

When I read the description of the book I wondered if all of the different aspects--the magical realism, the romance, the environmental issues, the battle over the mine, and overcoming bad choices and tragic pasts, would be too much for the 300-ish pages, but the writing is skillfully done and overall it all works together well. It also inspired me to go online to look and learn more about Beara and the Red-billed Chough. (Image from Wikipedia) Both Annie and Daniel are well-drawn characters and it is easy to wish the best for them. I did want to shake Annie several times, not for her past choices and mistakes, but for the ones she continued to make. For me the end of the book came a bit too quickly and I would have liked more information about the resolution on a couple of the plot points, but I really enjoyed my time in Beara and didn't want to leave. 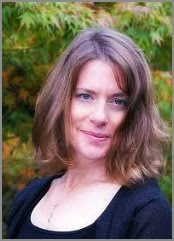 Author Notes: Julie Christine Johnson’s short stories and essays have appeared in journals including Emerge Literary Journal; Mud Season Review; Cirque: A Literary Journal of the North Pacific Rim; Cobalt; and River Poets Journal. Her work has also appeared in the print anthologies Stories for Sendai; Up, Do: Flash Fiction by Women Writers; and Three Minus One: Stories of Love and Loss. She holds undergraduate degrees in French and psychology and a master’s in international affairs. Julie leads writing workshops and seminars and offers story/developmental editing and writer coaching services. 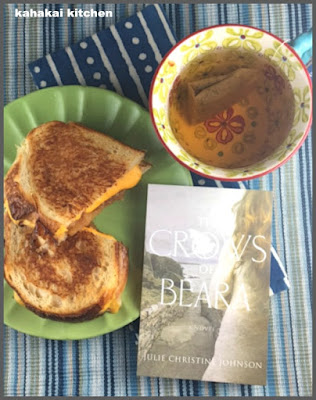 For my book-inspired recipe, I was called to the toasted cheese sandwich that Daniel makes for his niece--probably because I've been craving a grilled cheese. I also decided to work in the apple (from a bowl on the counter) and the jam that was mentioned to go with toast in the book. I've made grilled cheese sandwiches with apple slices before and love the pairing, but I really wanted to make one using this delicious Caramel-Apple Jam (recipe here) that I made last week for my Cook the Books (virtual foodie book club) submission for Farmer Boy. For that post I served it on soft sourdough bread with cheddar cheese slices and it was phenomenal, but it was also begging to be put into a grilled cheese sandwich. 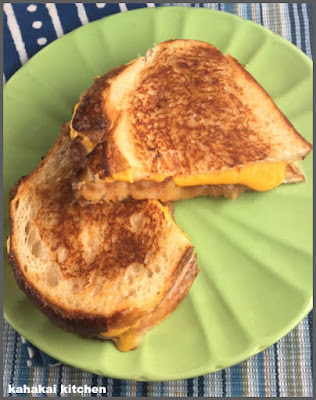 For my sandwich I used American cheese to get the right melty-ness, and Muenster because it's another favorite--but cheddar would of course be delicious--as would a smoked mozzarella or Gouda or even a brie. The jam recipe is linked above and for the sandwich I just spread two pieces of sourdough bread with butter on one side, layered American cheese, apple jam and Muenster in between them and fried the sandwich over medium heat until the bread was golden brown and crisp and the cheese nice and melted. I ate it for a late lunch, accompanied by a cup of chamomile tea. 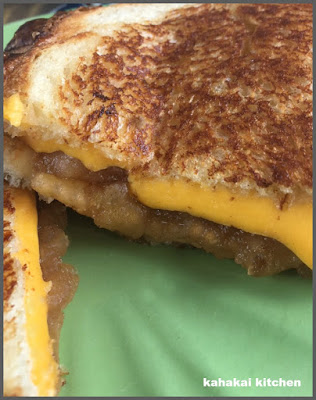 Notes/Results: Oh yeah, this was REALLY good. Say what you will about American cheese and how processed it is and how it really isn't cheese and I'll totally agree with you but it really does add that ooey-gooey edge a good grilled cheese sandwich needs, and the flavor (this was a sharp yellow cheese), combined with the more mellow muenster, pairs well with the sweet/tart apple jam. I took pictures as quickly as I could so I could get it in my belly while it was still warm--enjoying every bite. ;-) I will definitely be making more of the jam in order to make more of these grilled cheese sandwiches. Yum! 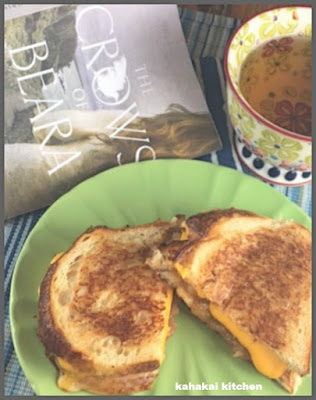 I am also linking this sandwich up to Souper Sundays, hosted right here at Kahakai Kitchen. Each Sunday we feature delicious soups, salads, and sandwiches from friends around the blogosphere--please join in if you have any to share. Here's this week's post and linkup.

Note: A review copy of "The Crows of Beara" was provided to me by the author and the publisher via TLC Book Tours. I was not compensated for this review and as always, my thoughts and opinions are my own.