The Book Tour Stops Here: A Review of "American Gods" by Neil Gaiman, Served with a Recipe for Deviled Eggs with Smoked Salmon & Fried Capers

Happy Thursday! Friday and the Memorial Day holiday weekend are just around the corner--making it a very good day. Also making it a very good day is my TLC Book Tour stop and review of The Tenth Anniversary Edition of Neil Gaiman's American Gods, reissued to tie in with the STARZ® Original Series that debuted last month and that I can't wait to watch, now that I have finally read the book.

Accompanying my review of this innovative, odd and somewhat magical book, is a recipe for delicious Deviled Eggs with Smoked Salmon and Fried Capers--certainly worthy of any gods and goddesses (American or otherwise) or just those of us mortals looking for a tasty snack or pupu! 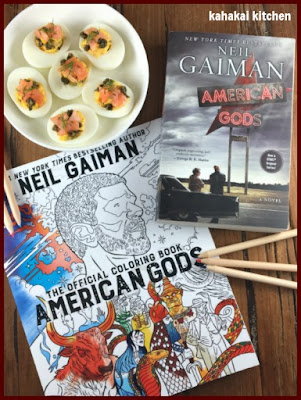 Locked behind bars for three years, Shadow did his time, quietly waiting for the day when he could return to Eagle Point, Indiana. A man no longer scared of what tomorrow might bring, all he wanted was to be with Laura, the wife he deeply loved, and start a new life.

But just days before his release, Laura and Shadow’s best friend are killed in an accident. With his life in pieces and nothing to keep him tethered, Shadow accepts a job from a beguiling stranger he meets on the way home, an enigmatic man who calls himself Mr. Wednesday. A trickster and a rogue, Wednesday seems to know more about Shadow than Shadow does himself.

Life as Wednesday’s bodyguard, driver, and errand boy is far more interesting and dangerous than Shadow ever imagined. Soon Shadow learns that the past never dies . . . and that beneath the placid surface of everyday life a storm is brewing—an epic war for the very soul of America—and that he is standing squarely in its path.

PLUS… don’t miss American Gods: The Official Coloring Book, featuring illustrations by Yvonne Gilbert, Craig Phillips, and Jon Proctor. Indulge your inner artist and revel in the stunning imagery of the gods and people, places and artifacts of Neil Gaiman’s American Gods. 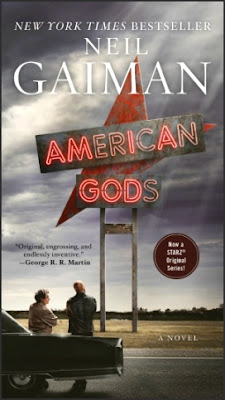 Beyond Coraline which I have loved for ages, I confess to being a more recent convert to Neil Gaiman's writing over the past few years--but I've begun digging into his body of work, both reading and listening (Neil Gaiman's reading his work on audio book is amazing and life-changing, though I suspect Neil Gaiman reading the phone book or the back of a cereal box would have ample charm). I have worked my way through his essays in The View From the Cheap Seats, enjoyed several short story collections, and listened to The Ocean at the End of the Lane, The Graveyard Book, and Norse Mythology over the past few months. and I had planned to tackle American Gods and its 500+ pages even before signing up for the TLC Book Tour review. Gaiman's sense of dark and weird fantasy and his often child-like whimsy speak to me and I love escaping into the different worlds he creates.

American Gods is quite the ride--a dark, imaginative, wild ride--full of mythology and magic, the old and the new, and a bunch of eccentric characters. Most of the characters  are gods from different cultures and traditions who have ended up, by choice or not, immigrating to America over the years, and these gods are behaving pretty badly for the most part. Although I relished the bad behavior of the gods in Norse Mythology, I wasn't sure I would sustain an appreciation for them for so many pages in American Gods. I was also unsure about the main character, the very recently paroled Shadow, as most of my favorite Gaiman protagonists are children. But, by the time he headed to the warden's office in the beginning of the book to receive his early parole and some very bad news, Shadow won me over and I found myself vested in his journey and at times, actually wanting to give him a hug--taciturn demeanor and intimating size be damned. The majority of the other characters are fairly over-the-top and not quite as easy to identify with or care for with a few exceptions and there are many of them, as well as tangents and subplots galore to keep track of, but it all worked for me in the end and came together into one crazy road trip. There were a few times that I scratched my head, or went back to reread a deeper meaning in something that I thought I missed and that made me think, "I need to be smarter or maybe smarter and odder for you Neil!" Even with those moments, the book flowed and I never found myself bogged down by the story or the pacing--I looked forward to picking up the book each time I had the chance to read it.

Speaking of reading, I did a multi-media approach with American Gods, alternating mainly between an e-book copy of the 10th Anniversary edition and the full-cast Tenth Anniversary Audio Book from Audible that I grabbed with a credit. This is the first time I went back and forth and I enjoyed the experience. The audio book and the different voice and characters brought the story to life when I was cooking or walking. I had originally thought it would be fun to use with the Official American Gods Coloring Book the publisher sent, but I never managed to get any coloring done. It was also helpful to have the print and e-book copies for those moments I wanted to go back and reread.

I think American Gods is a book people will either strongly like, or they will (probably strongly) dislike it if they find it too strange. It definitely is weird and dark, but for me it was in the best way and it combined really good entertainment with making me think about the deeper meanings. If you are a Gaiman fan, you like fantasy, mythology, and/or enjoy epic road trip stories that are worth the sometimes crazy driving and bumps along the way, chances are you will come down on the "heavy like" side of things as I did. I'm looking forward to getting my hands on the STARZ® Original Series soon. 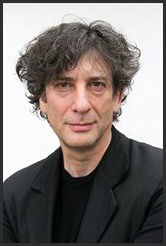 Author Notes: Neil Gaiman is the New York Times bestselling author of the novels Neverwhere, Stardust, American Gods, Coraline, Anansi Boys, The Graveyard Book, Good Omens (with Terry Pratchett), The Ocean at the End of the Lane, and The Truth Is a Cave in the Black Mountains; the Sandman series of graphic novels; and the story collections Smoke and Mirrors, Fragile Things, and Trigger Warning. He is the winner of numerous literary honors, including the Hugo, Bram Stoker, and World Fantasy awards, and the Newbery and Carnegie Medals. Originally from England, he now lives in the United States. He is Professor in the Arts at Bard College. 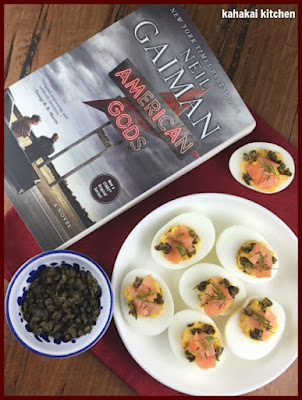 I ended up taking inspiration for my book-inspired dish from the goddess Easter who Shadow meets in a park where she is having a picnic on a paper tablecloth with a variety of Tupperware dishes in front of her. There were deviled eggs and deviled eggs happen to be one of my very favorite things. Easter makes Shadow a plate piled high with the eggs, roast chicken, chicken curry, chicken salad, and cold rabbit. Since she plays a role later in the book and it's always a good time for deviled eggs, I decided to make them. I have been wanting to add fried capers (capers are my addiction) to deviled eggs after seeing variations here and there. Since smoked salmon pairs well with capers, I decided to do a nod to the Norse gods and and top my eggs with bits of smoked salmon, dill and few caraway seeds along with the fried capers that are also incorporated into the deviled egg mixture. 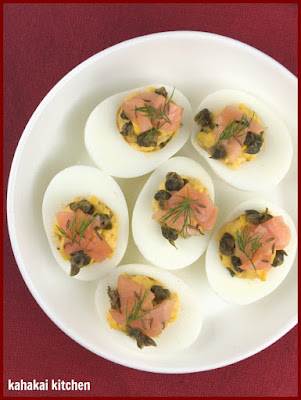 Cut each hard boiled egg in half lengthwise and gently remove the yolks. In a small bowl, mash the yolks with a fork and add the capers, mayonnaise, Dijon mustard, caper juice, cayenne pepper and smoked paprika. Stir until blended, smooth and creamy. Taste for seasoning, adding salt and pepper as needed--you shouldn't need much salt--caper juice is briny.

Fill eggs with equal amounts of filling--using either a small spoon or a pastry bag with a large tip. Garnish each egg with a few pieces of smoked salmon,2-3 fried capers, tiny pieces of fresh dill and a few caraway seeds. 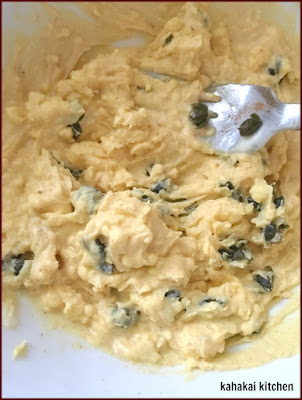 Fried Capers
(This will make more fried capers than you need for the eggs but that's OK, you are going to eat them while you make the eggs and/or, you can use any extras on grain bowls, salads, bagels with cream cheese, etc.)

Heat oil in a small skillet over medium-high heat. Once oil is hot, Carefully add 1/2 of the capers, frying until they crisp and begin to open up like little flowers. Carefully remove the first batch from the oil with a slotted spoon and drain on a paper towel-lined plate. Repeat with the second half of the capers. 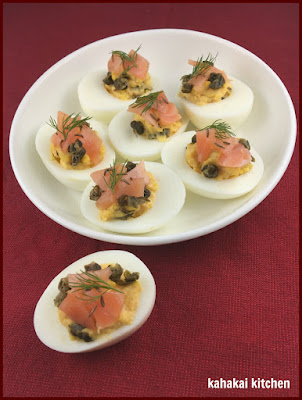 Notes/Results: First off, fried capers are a necessary part of life and should be enjoyed on more than deviled eggs. ;-) Secondly, they pair amazing with deviled eggs and also with the smoked salmon and dill in this recipe. These were little bites of goodness and would be a quick and easy pupu to put together for a party or as a dinner or lunch starter--or to enjoy as a yummy snack when you are audio coloring with the American Gods audio book and the Official American Gods Coloring Book. I liked having the fried capers mixed into the egg salad and as a garnish on top--so much caper yum! ;-) In fact, as tasty as the smoked salmon was, I would have been just as happy with only the fried capers on top of the fried-caper laced eggs. I will most definitely make these again. 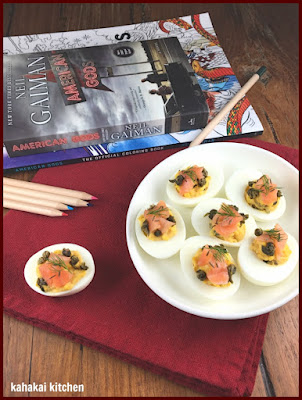 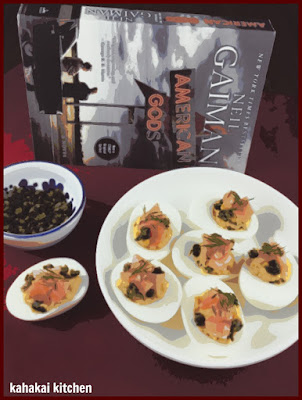 Note: A review copy of "American Gods" and a copy of 'American Gods: The Official Coloring Book" were provided to me by the publisher Harper Collins and TLC Book Tours. I was not compensated for this review and as always, my thoughts and opinions are my own.