The Book Tour Stops Here: A Review of "The Hideaway" by Lauren K. Denton, Served with a Recipe for West Indies (Crab) Salad

Happy Wednesday! On today's TLC Book Tour I'm reviewing the The Hideaway by Lauren K. Denton, a debut novel about going back home and finding your way. Accompanying my review is a recipe for an Alabama Gulf Coast classic, West Indies Salad, served on crackers. 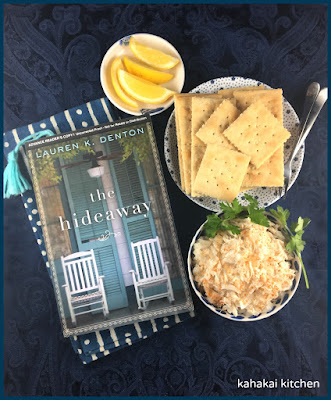 When her grandmother’s will wrenches Sara back home from New Orleans, she learns more about Margaret Van Buren in the wake of her death than she ever did in life.

After her last remaining family member dies, Sara Jenkins goes home to The Hideaway, her grandmother Mags’s ramshackle B&B in Sweet Bay, Alabama. She intends to quickly tie up loose ends then return to her busy life and thriving antique shop in New Orleans. Instead, she learns Mags has willed her The Hideaway and charged her with renovating it—no small task considering Mags’s best friends, a motley crew of senior citizens, still live there.

Rather than hurrying back to New Orleans, Sara stays in Sweet Bay and begins the biggest house-rehabbing project of her career. Amid Sheetrock dust, old memories, and a charming contractor, she discovers that slipping back into life at The Hideaway is easier than she expected.

Then she discovers a box Mags left in the attic with clues to a life Sara never imagined for her grandmother. With help from Mags’s friends, Sara begins to piece together the mysterious life of bravery, passion, and choices that changed Mags’s destiny in both marvelous and devastating ways.

When an opportunistic land developer threatens to seize The Hideaway, Sara is forced to make a choice—stay in Sweet Bay and fight for the house and the people she’s grown to love or leave again and return to her successful but solitary life in New Orleans. 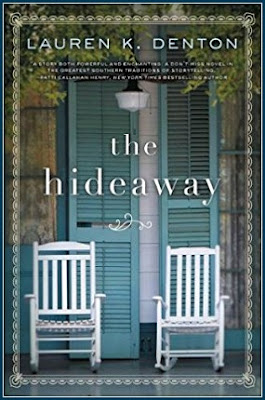 First off, I just love the cover of this book. That might be a silly thing to start a review with but I keep looking at the striking photo and colors and then after reading the book I was pleased to find that it totally fits the story. I also ended up really enjoying the book as coming off of a couple of heavy, sadder reads, this sweet Southern novel was exactly what I was in the mood for. I love a good "go-back-home-and discover secrets-and-find-yourself" story and The Hideaway is just that. Throw in a quaint B&B in need of repair, some lovable side characters, and plenty of Southern charm and you have a perfect book for your beach bag, or to enjoy on the lanai.

The story is told from the points of view of Sara and the memories of her grandmother "Mags." When Mags passes away, Sara thinks she will be making a quick trip from the life she has created for herself in New Orleans to go to the funeral and wrap things up at "The Hideaway"--her grandmother's B&B in Sweet Bay, Alabama. Instead she finds herself the owner, tasked with renovating it and the landlord of her grandmother's senior citizen friends who have been living there. Soon Sara is knee-deep in renovations with help from Crawford, an attractive contractor and learning about her grandmother's life and the secrets she held.

Both Sara and Mags were great characters--although both of them held parts of themselves away from others, they were relatable and easy to like. The supporting characters were equally endearing--especially the two couple who live at The Hideaway; Dot and Bert and Glory and Major and The Hideaway is almost its own character too. Of course things don't run smoothly with a local developer after the property and Sara trying to decide what she wants to do and what ensues is slightly predictable, but the story is no less charming for that predictability. This is the author's first novel and I definitely want to read more. Her vivid descriptions of the people, places, feeling, and even the food of the South paint a lovely picture and make The Hideaway a wonderful way to escape--preferably hidden away yourself--with a glass of sweet tea and some saltines topped with my new favorite appetizer salad that you'll read about below.

Author Notes: Born and raised in Mobile, Alabama, Lauren K. Denton now lives with her husband and two daughters in Homewood, just outside Birmingham. In addition to her fiction, she writes a monthly newspaper column about life, faith, and how funny (and hard) it is to be a parent. On any given day, she’d rather be at the beach with her family and a stack of books. The Hideaway is her first novel. 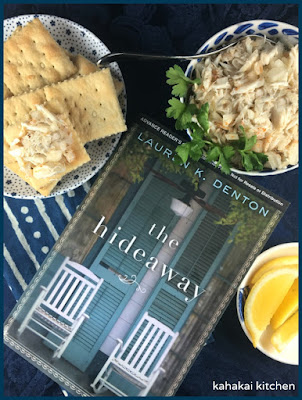 Sometimes my food inspiration comes from a special moment of connection to the book in a mentioned dish, other times I am drawn in by a new-to-me dish or food, even if it is a minor player in the story--as in this book where a mention of grilled shrimp and West Indies salad caught my eye. I wrote down West Indies Salad to look up, thinking it must be some kind of rice dish to go with the shrimp, but was surprised to learn that it's a regional appetizer salad dish of the Lower Alabama Gulf Coast area. It's a simple crab salad that apparently originated in Mobile, developed in 1947 by a restaurant owner named Bill Bayley with too much lump crab meat (is there such a thing?!) who combined the fresh crab meat with cider vinegar, sweet onion and cooking oil. It sounded a unusual and a bit dicey for someone who can't see fresh lump crab meat without thinking "crab cake" and was worried that I was about to ruin it--not great for a relatively expensive ingredient. Then I remembered pimento cheese, another Southern specialty that on paper (grated cheese and pimentos in mayonnaise) looks a bit scary, but how good it is in practice (like here and here and sort-of here) and I knew I had to try West Indies Salad as my book-inspired dish. 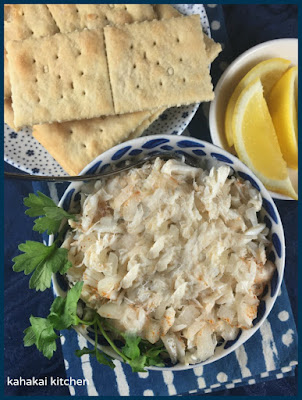 The recipe from Bill Bayley's restaurant supposedly was a closely-guarded secret until it showed up in a Junior League Cookbook but there are a plethora of recipes to be found online. I went with the one at Food.com that seemed the most authentic. It says to be exact in how you make it--ingredients and preparation and so I did--at least as much as possible. ;-) I served it on saltine crackers as noted and some sweet-ish tea.

Recipewrestler says, "It must be prepared exactly as directed, with careful layering. Use the coldest ice water you can find in the recipe. The longer this one marinates, the better. The recipe sounds simple, but the results are indescribably delicious. This well-guarded recipe was finally published in 1964 in the Junior League of Mobile cookbook, Recipe Jubilee." 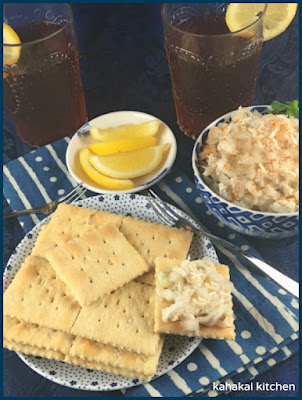 1 medium sweet onion (I used a Maui onion), chopped fine
1 lb fresh lump crab meat, drained & picked through (I used Costco's lump crab meat)
4 oz cooking oil (the recipe called for Wesson, I used Smart Balance since it's what I had)
3 oz cider vinegar
4 oz ice water, cold as you can get it
salt and black pepper to taste
saltines to serve, lemon wedges if desired

Spread one half of the chopped onion in the bottom of a bowl or non-reactive container. Cover with the crab lumps and top with the remaining onion. Sprinkle with salt and pepper and pour the coking oil, cider vinegar and ice water over the top. (I mixed it together first.)

Cover and place in the refrigerator to marinate for 2 to 12 hours.

Toss lightly before serving--as an appetizer with saltines, or on a bed of lettuce (or over sliced avocado--which looked delicious). I sprinkled mine with a tiny bit of smoked paprika for color. Note: Some of the recipes on line had it served with lemon wedges and I added them for color but though the balance of flavor was perfect without the lemon. 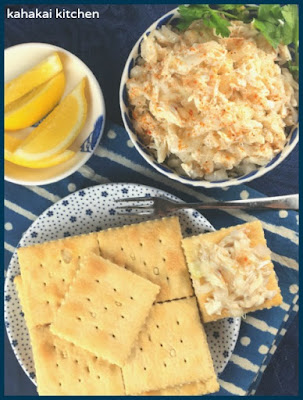 Notes/Results: They might take their tea a bit too sweet for my tastes but I can certainly get on board with quirky Southern appetizers based on pimento cheese and now West Indies Salad. Although I expected to like it, I was surprised at how delicious a simple preparation with a few ingredients can be. The tangy dressing draws any sharpness that might remain off of the onions and goes perfectly with the sweetness of the crab meat and the saltines. It is one of those things that leans toward addicting. I think it is also going to go well with creamy avocado--another way it was shown in some of the recipes I found. Served with a bit of this less-sweet Sweet Tea, it made a great dinner on a humid evening. I will happily make it again. 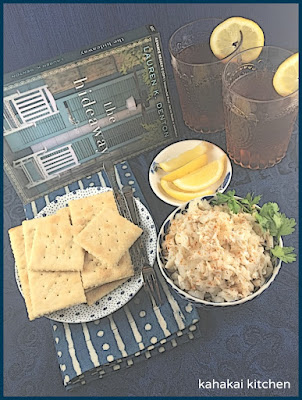 I'm linking up this tasty salad appetizer to Souper Sundays, hosted here at Kahakai Kitchen. Each Sunday we feature delicious soups, salads, and sandwiches from friends around the blogosphere--please join in if you have any to share. Here's this week's post and linkup.

Note: A review copy of the "The Hideaway" was provided to me by the publisher and TLC Book Tours. I was not compensated for this review and as always, my thoughts and opinions are my own.