The Book Tour Stops Here: A Review of "News of the World" by Paulette Jiles

Today I am excited to be a stop on the TLC Book Tour for the riveting historical novel The News of the World by Paulette Giles. Not only did I find this small but mighty book difficult to put down, it has been honored as National Book Award Finalist this year. So pour yourself a cup of strong, cowboy coffee and settle in for my review. 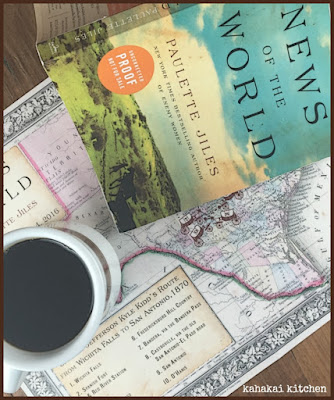 It is 1870 and Captain Jefferson Kyle Kidd travels through northern Texas, giving live readings to paying audiences hungry for news of the world. An elderly widower who has lived through three wars and fought in two of them, the captain enjoys his rootless, solitary existence.

In Wichita Falls, he is offered a $50 gold piece to deliver a young orphan to her relatives in San Antonio. Four years earlier, a band of Kiowa raiders killed Johanna’s parents and sister; sparing the little girl, they raised her as one of their own. Recently rescued by the U.S. army, the ten-year-old has once again been torn away from the only home she knows.

Their 400-mile journey south through unsettled territory and unforgiving terrain proves difficult and at times dangerous. Johanna has forgotten the English language, tries to escape at every opportunity, throws away her shoes, and refuses to act “civilized.” Yet as the miles pass, the two lonely survivors tentatively begin to trust each other, forging a bond that marks the difference between life and death in this treacherous land.

Arriving in San Antonio, the reunion is neither happy nor welcome. The captain must hand Johanna over to an aunt and uncle she does not remember—strangers who regard her as an unwanted burden. A respectable man, Captain Kidd is faced with a terrible choice: abandon the girl to her fate or become—in the eyes of the law—a kidnapper himself. Exquisitely rendered and morally complex, News of the World is a brilliant work of historical fiction that explores the boundaries of family, responsibility, honor, and trust. 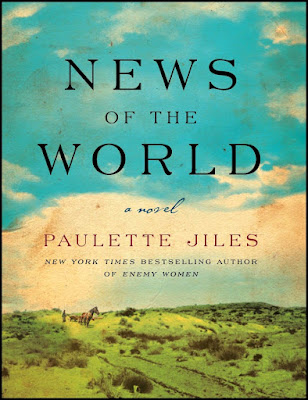 I am a fan of historical fiction, but my tastes tend to run from the 1920s through WWII and I usually don't have much of an interest in westerns. Over the past few years however, I have tried to not get hung up on the genre or even the setting of a book, and let the description of the story draw me in. The idea of a former soldier turned news reader (someone who travels through dusty town after dusty town, reading the news for a dime a head) was intriguing, as was the idea of a young girl, kidnapped and her family killed by raiders when she was six, being raised by the Kiowa and returned to the U.S. Army at age ten. The idea of these two strangers traveling together to return the girl to her aunt and uncle, sold me on signing up for the book tour. The fact that it was 220-ish pages sealed the deal--if I didn't like it, the book would be a quick read. The reality is that I became quickly transfixed by this beautiful story and wished it could have gone on another 200 pages, just to spend more time with Captain Jefferson Kyle Kidd and Johanna and to absorb more of the Texas landscape in the aftermath of the Civil War.

As much as News of the World is a Western historical novel, it transcends those categories and is really about the bonds that form between people put together in an unusual situation. One would expect a gruff elderly man, used to being on his own in the world since his wife died and his daughters grown and married, not to be able to relate to a traumatized ten-year-old girl who no longer speaks English, wants to be barefoot and live outdoors, and is desperate to escape back to the tribe and the only mother and family that she remembers. Captain Kidd is a man with depth and character, who is taking Johanna back to family as much for a favor to a friend than the $50 gold piece--most of which he spends on a wagon and supplies to get Johanna through the territory as safely as possible. His gruff kindness builds trust with the girl and it is a beautiful thing to watch their relationship unfold. Johanna is an amazing character too--smart, wild and brave, older than her years because of the traumas she has endured.

There is danger and adventure--it is the Wild West they are traveling through, but that isn't the focus of the story and there is a nice balance of action, relationship, humor, and poignancy. The first dozen pages in, I had to get used to the author's style of writing as the lack of quotation marks around dialogue was a bit disconcerting. But I quickly adapted and it seemed to fit with the story and characters and added to the uniqueness of the book. News of the World is the first Paulette Jiles book that I have read, but I have a feeling it won't be the last. It's a special treasure of a novel--there was even a map included in the marketing materials outlining the Captain and Johanna's journey (with old newsprint-style reviews on the back), which I found myself pulling out to consult as I read. Highly recommended, this is a beautiful and moving story that will stay with me.

Author Notes: Paulette Jiles is a novelist, poet, and memoirist. She is the author of Cousins, a memoir, and the novels Enemy Women, Stormy Weather, The Color of Lightning, Lighthouse Island, and News of the World. She lives on a ranch near San Antonio, TX.

I always look for the food in books of course and there was food to be found in The News of the World--starting with coffee, corn dodger (like a small pan-fried cornmeal fritter) and bacon, ground meat, a dinner pail of smoking barbecued meat, homemade divinity candy, black beans and bacon, roasted chicken, a German dish made of noodles, ground mutton and cream sauce with preserved cauliflower, sausages and cakes and flan. 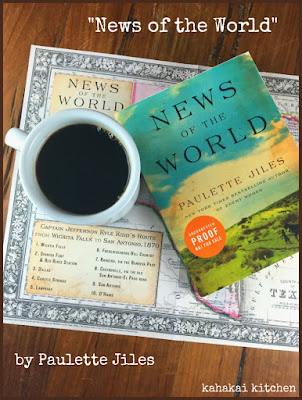 I usually make a dish inspired by the book to accompany my reviews and unfortunately, this just wasn't the week for it as I am getting over some fun bronchial stuff and needed to sleep rather than cook. Had I the energy and the cornmeal, I would pair this story with a plate of corn dodgers like these, but instead I am having a cup of strong, black coffee--just like the Captain would have. 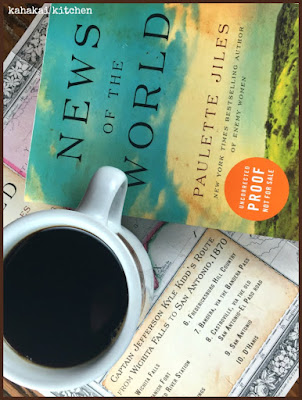 I'm linking up this review to the Weekend Cooking event at Beth Fish Reads, a weekly event that is open to anyone who has any kind of food-related post to share. For more information, see the welcome post.

Note: A review copy of "The News of the World" was provided to me by the publisher, Harper Collins and TLC Book Tours. I was not compensated for this review and as always, my thoughts and opinions are my own.