Yes, I am summoning up Beetlejuice as our October Food 'n Flix movie pick! 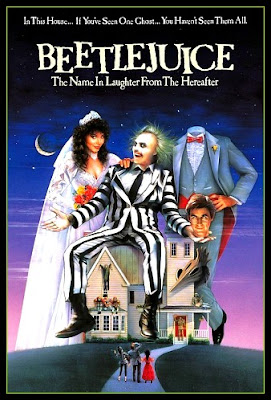 Chances are you have seen this 1988 Tim Burton-directed comedy-fantasy film, but if not, Beetlejuice is the story of a Connecticut couple Adam and Barbara Maitland (Alec Baldwin and Gina Davis) who get in an accident and wake up back in their home. It isn't long before they realize that they didn't survive. ('The Handbook for the Recently Deceased' that they find is a pretty big clue!) They also find that they can't leave their house-making it difficult when a new family from the city moves in. When the Deetz family and their designer Ortho take over and redecorate the house, Barbara and Adam try to scare them out and when that doesn't work they summon Betelgeuse (pronounced Beetlejuice and played by Michael Keaton), a "bio-exorcist" ghost for help--only Beetlejuice's kind of help wreaks complete havoc. 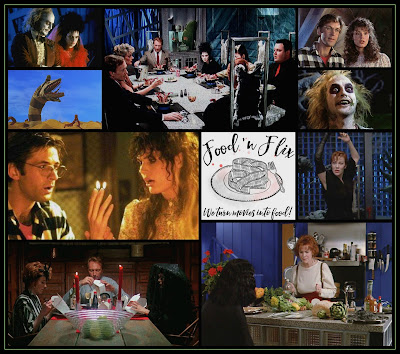 I'll be the first to admit that it is not the foodiest of films, but based on the creative Halloween fun we had with Hocus Pocus last October, it seemed liked the perfect pick. I just watched it again for the food and while not plentiful, it can be found--on the kitchen counters, Chinese (Cantonese) food in boxes, coffee, tea, and alcohol, the prepping of produce for the famous dinner party with a gnarly shrimp cocktail for starters. Plus, knowing the creativity of this group, I have no doubt you will find inspiration in the colorful set, crazy sculptures and monsters, and even the Calypso music.

I look forward to seeing what you come up with!


How to Participate in Food 'n Flix:

Deadline for submission is Monday, October 31st (by the end of the day wherever you are.)