Happy Tuesday that feels like Monday with the holiday weekend! On today's TLC Book Tour stop, I am reviewing The Memory Painter by Gwendolyn Womack, a novel that travels time and spans several genres--science fiction, historical fiction, adventure, thriller and romance. Along with my review are some simple onigiri--Japanese rice balls, with two fillings, inspired by the book. 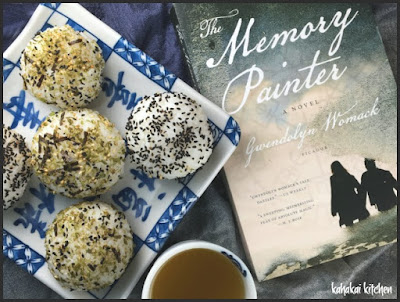 What if there was a drug that could help you remember past lives?

What if the lives you remembered could lead you to your one true love?

What if you learned that, for thousands of years, a deadly enemy had conspired to keep the two of you apart?

Bryan Pierce is an internationally famous artist, whose paintings have dazzled the world. But there’s a secret to Bryan’s success: Every canvas is inspired by an unusually vivid dream. Bryan believes these dreams are really recollections, possibly even flashback from another life, and he has always hoped that his art will lead him to an answer. And when he meets Linz Jacobs, a neurogenticist who recognizes a recurring childhood nightmare in one Bryan’s paintings, he is convinced she holds the key.

Their meeting triggers Bryan’s most powerful dream yet--visions of a team of scientists who, on the verge of discovering a cure for Alzheimer’s, died in a lab explosion decades ago. As his visions intensify, Bryan and Linz start to discern a pattern. But a deadly enemy watches their every move, and he will stop at nothing to ensure that the past stays buried. 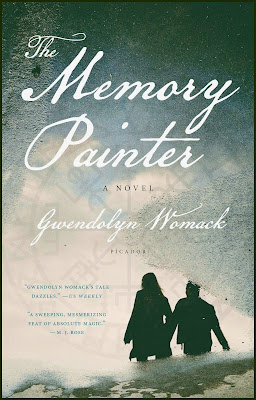 The Memory Painter has a unique and intriguing premise--Bryan is a rising star in the art world who paints incredibly vivid scenes from history that come to him in dreams and leave him with memories, knowledge of languages and abilities, and the realization that he has lived through these happenings. Linz is a scientist who first meets Bryan when they are both drawn to a museum exhibit of the ancient Pyramids. At a gallery showing she recognizes one of Bryan's paintings as a dream she has had since childhood and the two are drawn together. Linz came to Boston to work for her father's pharmaceutical research company and Bryan believes that they were a couple and connected in many past lives, including once being part of a team of scientists exploring a drug that could recapture memories and be a potential cure for Alzheimers--but dying before they finished. Linz isn't sure what to believe and how much she can trust Bryan and what is real and what are dreams.

The author does an excellent job of bringing history and complicated events to life with her words. With Bryan's past lives ranging from a Japanese feudal lord to a famous poet and author, a Buddhist monk to a Viking, and many more in between, I felt like I got a world history lesson, while on an adventure. There are times it all got to be a bit much--did Bryan in particular ever have a past life where he was ordinary? For the 336 pages, maybe cutting back on the dreams or a past life or two would have helped the pacing in the middle, which lagged. Things picked up towards the end when it turned from history lesson to thriller, however the end seemed more of a set up for another book than a true ending. It's not a cliffhanger per se, but there are more questions than answers and for the drawn-out middle, the end came a bit too abruptly for my taste. Still, I really liked the story overall--it caught me up in dreams, history, and memories and definitely kept me turning the pages. I was intrigued by Bryan, Linz, and the other characters and so I'm sure I'll grab the next book to find out what happens to them.

Author Notes: Gwendolyn Womack began writing plays in college and majored in Theatre at the University of Alaska, Fairbanks. She received an MFA in Directing Theatre and Film from California Institute of the Arts and currently lives in Los Angeles with her family. The Memory Painter is her first novel.

There is not a lot of food in The Memory Painter but there are mentions--like a dying Alexander Pushkin (Russian poet and novelist) asking his wife to feed him some ambrosial cloudberry jam, Doc's Waterfront Bar & Grill--Bryan's father's restaurant with cocktails, clam chowder and Irish coffees. There was a spilled caramel macchiato, doughnuts, and a cup Kona coffee, potatoes and Brussels sprouts in a garden, a meal of Greek food--dolmas, hummus, spanakopita and a decadent pistachio pasta, party appetizers of chicken satay and shrimp brochette, a father's restaurant order of lobster bisque, Caesar salad, and prime rib--changed by his daughter to a healthier sea bass and steamed vegetables, and even some rice and berries for a Buddhist monk after nine years of meditating. I was tempted to go with the Greek food (always a favorite), but a reference to a "modest supper of onigiri rice balls" consumed by Ōishi Yoshio before the revenge of the forty-seven Ronin (Samurai) to avenge their master's death that caught my eye instead. 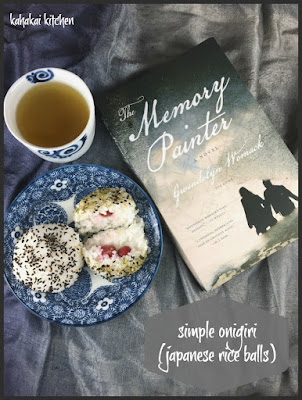 Onigiri are an easily-found, grab and go snack or meal in Japan as well as here in Hawaii, but for some reason, I have never made them myself so this seemed like a good time to try. Onigiri uses white rice, wrapped around a small filling (anything from pickled veggies, to cooked meat or fish, or other dried or fried foods). You may have seen onigiri made into different shapes--triangles, spheres or round shapes, cylinders, or ovals and often wrapped in nori. People get very fancy and detailed with their onigiri with fancy shapes and molds for the rice and cutting nori for decorations--look it up under Google images and you will see just how basic mine are. (Hey, in the book they were referred to as modest and simple--so I went with it!) ;-) 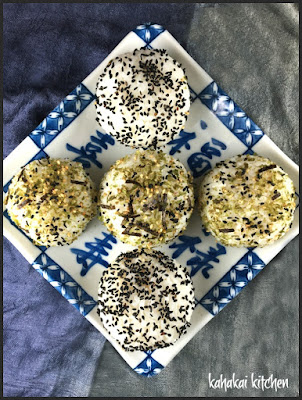 I chose to make the most basic of onigiri--wrapping up two fillings--purchased pickled plums, dusted with furikake (sesame-seaweed seasoning for rice)  and a less-traditional mix of canned salmon, nori flakes and capers with a little lemon juice mixed in and sprinkled with black sesame seeds. I mostly followed this How to Make Onigiri post from Kimiko Mitarai at Serious Eats for the recipe. I was sure my blogger friend Kat from Our Adventures in Japan had made them many times, so I looked at her post and used a version of her plastic wrap technique for forming the rice with less mess. Kat also does a great job of explaining the different names and types of onigiri and shares some Japan and Hawaii onigiri history in her post, so I recommend reading it for more detail than I am providing here! Both posts have photos of the steps to making the onigiri--something I did not do (sticky rice hands--too much bother!) 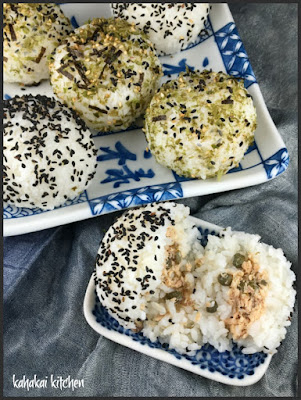 Rice: Make white sushi rice in a rice cooker or on the stove by measuring out 1 1/2 cups sushi rice, rinsing it well and draining it. Place 2 cups of water in a medium pot, add the rice, and bring to a simmer over medium-high heat. Stir once, cover the pot and turn the heat to medium-low, cooking rice for 15 minutes. Remove pot from the heat and leave covered for another 10-15 minutes. Fluff rice and allow to cool slightly.

To Make Onigiri: Once rice is cool to the touch, set up a bowl of salted warm water, 6-8 small squares of plastic wrap, your fillings and any toppings you want to use. Moisten your hands with water and scoop rice into the middle of your plastic wrap--push down in the center slightly to make a small indentation. Add your filling to the center indentation of your rice and top with more rice. Gather the corners of the plastic wrap together, twisting the top with one hand and using the other hand to form it into a ball or other desired shape. Gently squeeze, pat and rotate the rice until a smooth ball is formed. Carefully unwrap your onigiri, dip your hands into the salted water and lightly pat onigiri, then sprinkle on your desired toppings. Set completed onigiri aside if planning to serve or eat soon, or you can gently wrap the completed onigiri in a clean square of plastic wrap. Repeat process until you run out of rice. I got 7 onigiri from my 1 1/2 cups dry rice. 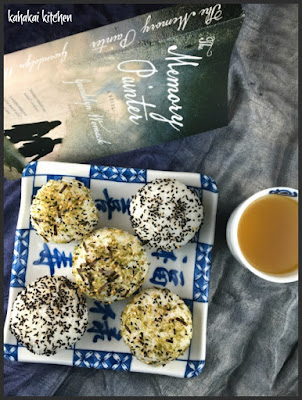 Notes/Results: Fun and tasty and not too bad for my first time I think! ;-) My favorite was the salmon, nori & capers--lots of flavor and I do love my capers. The ones with the pickled plums were good in flavor but the plums I grabbed were the smaller koume zuke (actually technically a tiny half-ripe Japanese apricot according to this), rather than the softer umeboshi plum and with the pits, they were a bit unwieldy to eat--probably should have stuck with just one plum in the rice ball! A couple of these onigiri made a nice afternoon snack with a cup of green tea. I will make onigiri again and perhaps get a bit fancier with a triangle shape and a nori wrap. 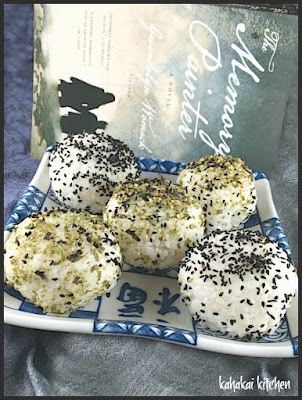 Note: A review copy of "The Memory Painter" was provided to me by the publisher and TLC Book Tours in return for a fair and honest review. I was not compensated for this review and as always my thoughts and opinions are my own.