The Book Tour Stops Here: Review of "The Monster's Daughter" by Michelle Pretorius, Served with a Recipe for Rooibos Honeybush Peach Lemonade (& a Giveaway!)

I am happy to be kicking off the TLC Book Tours for The Monster's Daughter by Michelle Pretorius. Set in South Africa between past and present day, its a gritty and fascinating blend of mystery/thriller, historical, and speculative fiction. Accompanying my review is a recipe for Rooibos Honeybush Peach Lemonade--a refreshing tangy/sweet summer drink inspired by the book, and there is also a giveaway for a chance to win a copy of the book at the end of the post. 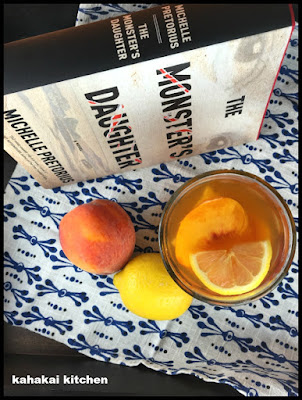 The Monster's Daughter is a tale of race and murder that takes readers through South Africa’s remarkable history. It’s a mix of the personal and the political, the past and the present.
.
After a fling with one of her superiors, young policewoman Alet Berg is reassigned from her big city beat to a small village in the country, where she makes a horrific discovery: the body of a young woman, burned beyond recognition. None of the villagers are willing to speak, especially to a transplant from the city whose stubbornness rubs even her colleagues the wrong way. But it’s also a dangerous case for reasons that Alet can’t know — reasons that go back one hundred years to the height of the Boer War, and a British doctor who conducted a series of grim experiments on Boer concentration camp prisoners. His work ended in chaos, but two children survived.

Pretorious was born and raised in South Africa, and she wrote the novel partly as a way to understand her country’s history, a history that her family (like many others) didn’t discuss. The Monster's Daughter is a gripping thriller, and a fascinating look at 100 years of buried history. 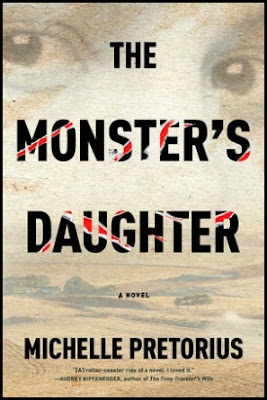 The Monster's Daughter starts in 2010, where we meet Constable Alet Berg on the side of the highway by the town of Unie, South Africa at the scene of an accident. Soon after, Alet and her partner, Sergeant Johannes Mathebe, are called to a local farm where a burned body has been found and Alet is determined to solve the crime--despite all of the obstacles that come her way. The book then goes back to 1901 where a young British Corporal is a reluctant part of the "scorched earth policy" of destroying and burning Boer farms and forcing the people into concentration camps. He attempts to help a teenage girl, Anna and her younger brother but ultimately Anna ends up alone and is forcibly taken to a house where a doctor is performing experiments on young women, trying to create a stronger race. The book goes back and forth through the years between 2001 and 2010, where we meet a array of characters, including the two children who survived after the experiments, and an apparent serial killer who has been killing innocent young women for decades. It's hard to explain much more than that (and I probably didn't explain it very well!) without spoiling the story, but there is plenty of action, suspense and twists and turns as the book unfolds.

I really enjoyed The Monster's Daughter, especially once it got going and once I figured out some of the dialect and South African slang words peppered through (I found this list helpful!)--for the most part I could get the gist of what was said by how the words were used, but it takes a bit of getting used to and picking up the rhythm. Alet is a stubborn and strong female character, definitely brittle and flawed but smart and driven to do the right thing--while breaking all of the rules. I also liked her reluctant partner in solving the case Johannes and their back-and-forth. There is quite a lot of darkness and violence in the book, which can be hard to read, but since the reality of the times in South Africa was war and apartheid, it is expected--even in 2010, violence, bigotry and political corruption run rampant. Overall, the author did an excellent job of crafting a suspenseful thriller--although there were some twists and reveals that I saw coming, there were still some surprises and I had a hard time putting the book down during the last half--anxious to find out how everything would come together. I have read a handful of books set in Africa but not much about South Africa and I liked the history lesson that came along with the mystery and suspense. I did wish for an afterward from the author about what sparked her to write this book--particularly the genetics plot line, as I found it fascinating and wanted to know how she came up with the idea. The Monster's Daughter might not be for everyone but if you can take some violence and darkness, like smartly written mystery-thrillers with historical and political leanings, police procedurals, and some speculative fiction in your books, I think you'll enjoy it. (Be sure to enter below for a chance to win a copy through 8/1/16.) 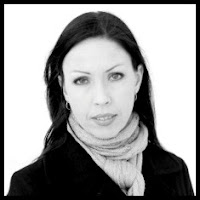 Author Notes: Michelle Pretorius was born and raised in South Africa. She received an MFA in Fiction Writing from Columbia College Chicago and is currently a PhD candidate at Ohio University. She has written for numerous publications, including Bookslut, Word Riot, and the Copperfield Review. She is a recipient of the John Schultz and Betty Shiflett prize and lives in Athens, Ohio. 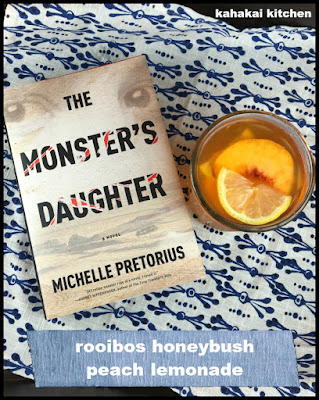 I drank a lot of rooibos tea while I read this book--mostly iced and so I decided to make a Rooibos Honeybush Lemonade as my book-inspired dish. Technically Rooibos is an herb, indigenous herb to South Africa that comes from the fine needle-like leaves of the Aspalathus linearis plant. When the leaves are cut, bruised and oxidized, they become a reddish brown color, giving it its name rooibos or “red bush.” Rooibos is caffeine free and has antioxidants and purported health benefits. Honeybush is often paired with rooibos and is its cousin of sorts, with a bright yellow flower and a honey scent. I used Trader Joe's Rooibos and Honeybush teabags but there are many different brands of loose and bagged rooibos and honeybush teas to choose from. 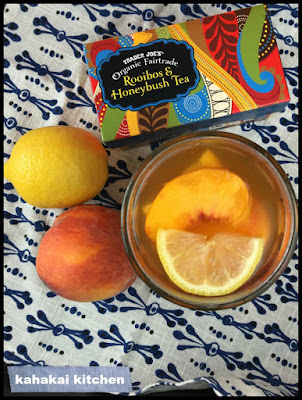 I had a couple of leftover peaches and decided to put them in my Rooibos Honeybush Lemonade, along with a little peach nectar--since peaches were grown on a farm featured in the book. I used honey syrup and the peach nectar to sweeten the lemonade.

Rooibos and Honeybush Peach Lemonade
By Deb, Kahakai Kitchen
(Makes 8 cups--or scale it down to the amount you want to make)

Mix all ingredients together in a large pitcher. Taste and add additional sweetener if needed, desired. Serve chilled over ice, garnished with lemon and peach slices. Enjoy!

Honey Syrup: Take equal parts honey and water and heat them in a saucepan until the honey melts into the water. Cool completely, place in a glass bottle or container and chill in fridge. Keep in the fridge for two weeks. 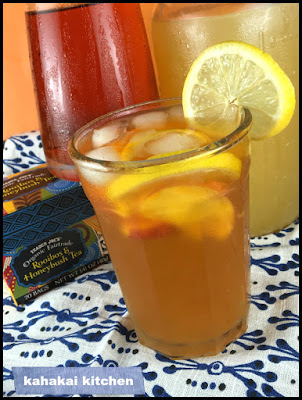 Notes/Results: Refreshing and a nice change from plain iced tea. The rooibos and honeybush tea has a sweet flavor already, so I kept my lemonade a bit on the tart side for the contrast. The honey syrup and peach nectar compliment the flavor of the tea and the result is a delicious summer drink. I will definitely make it again. 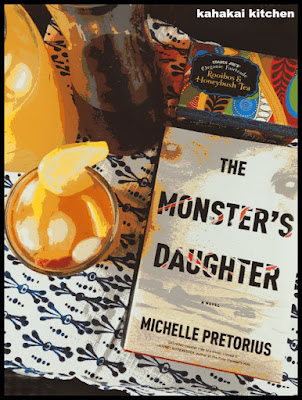 The publisher has generously offered a copy of The Monster's Daughter to one of my readers as part of this TLC Blog Tour. (Open to US/Canada addresses)

To enter the Rafflecopter Giveaway below, leave a comment please (Because I like to read them!) ;-) telling me either your favorite iced beverage is or why you would like to win a copy of The Monster's Daughter.


a Rafflecopter giveaway
This giveaway runs until 8/1/16. Good Luck!

Note: A review copy of "The Monster's Daughter" was provided to me by the publisher and TLC Book Tours in return for a fair and honest review. I was not compensated for this review and as always my thoughts and opinions are my own.