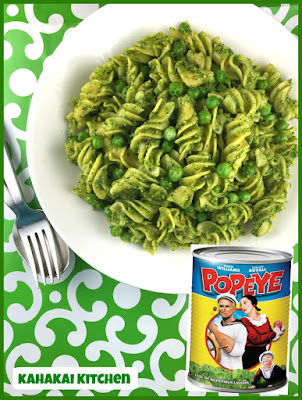 I have to be honest, I have no great affinity for Popeye, the character and the movie. I remember being exposed to the old cartoons growing up and my dad did have a Popeye the Sailor tattoo on his arm--although I think it was more of a "I'm on leave in the Navy during WWII and so what else do you get?" kind of thing rather than a deep love for Popeye. I think I remember watching this movie when it came out (or maybe on TV after it came out?), once, but I never had the desire to watch it again. But, that's why I love Food 'n Flix, it gets me to watch or re-watch movies I might not otherwise and it is always fun to see what everyone makes. And, although it's pretty cheesy--even for an '80s era-musical, it has its charm and I always enjoy the opportunity to have a little time viewing the much-missed Robin Williams. 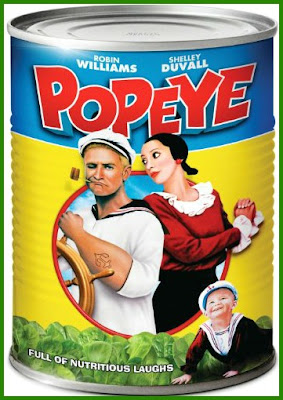 So the movie is pretty much a live-action musical of the cartoons with Robin Williams and Shelley Duvall well-cast as Popeye and Olive Oyl. Popeye, on a search for his long-missing sailor father, shows up in the coastal town of Sweethaven and meets Olive Oyl when he rents a room at her family's boarding house. Olive Oyl is engaged to rich and powerful Bluto, a ship captain who runs the town for the unseen "Commodore." Popeye and Olive Oyl come across a baby boy in a basket and Popeye 'adopts' him and names him Swee'Pea. Swee'Pea has the ability to predict the future and is kidnapped (by Wimpy for Bluto) and Popeye has to save the day--using spinach of course! OK, that was the short, non-spoiler version! 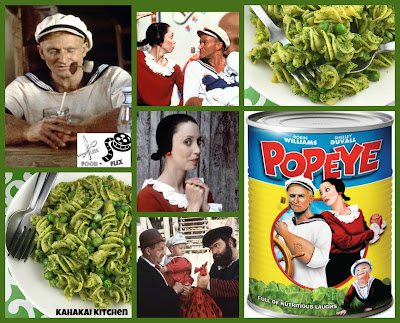 I actually watched the film while working on a project with only part of my attention captured by it and scrawling down some of the food inspiration on an envelope for the first third of the movie before petering out on the food listing. What I did manage to write down included: olive oil of course, fish--there was talk at the Oyl's of "fish futures" and dinner included fish, shrimp, chicken and meatballs. Olive (who was pretty annoying), complained that she wanted a glass and her mother asks whether she wants a wine glass, a brandy glass, or a water glass; there are plenty of burgers of course--including Wimpy's hard times meal of a "soup burger" and what looked like some sort of sandwich or canapé with an olive on top at Olive & Bluto's engagement party, and you can't help but think of sweet green peas (for Swee'Pea) and the obvious spinach.

Speaking of spinach, I don't think I knew that Popeye hated spinach (or at least he did in this film) and was surprised that it doesn't come up until near the end. None the less, spinach was a key part of my inspiration as I decided to make a dish that represented the newly-formed family unit of Popeye, Olive Oyl and Swee'Pea and make something that would sneak the spinach in for Popeye or other spinach-haters out there. Pesto seemed like the perfect solution--using spinach, parsley and tarragon in place of the basil. Pesto goes great on pasta and in this case, I picked a gluten-free (quinoa & corn) rotini-style pasta for its corkscrew shape (it holds pesto well and the movie is pretty screwy). There is plenty of olive oil in the pesto for Olive and of course some frozen sweet peas for Swee'Pea. 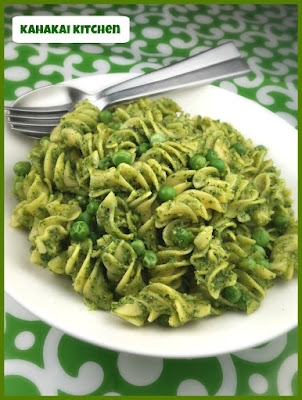 Because I am limiting my dairy, I made a vegan pesto, excluding the cheese. I swapped in hemp seed/hemp hearts for the Parmesan to boost the protein and healthy fats and to give it a little something extra. Instead of pine nuts, I used pistachios for the color and creaminess, and I used the herbs I had on hand--flat-leaf parsley and tarragon, with plenty of lemon juice and garlic to pump up the flavor of the spinach.

Pesto is easily adaptable and you can of course use what you like/have on hand, but my recipe is below.

Pasta with Sweet Peas and Spinach Pesto
By Deb, Kahakai Kitchen
(Serves 3 to 4)

Cook pasta according to package directions until al dente. During the last minute of cooking time, stir in  the defrosted peas.  Drain the cooked pasta and peas, place in a large bowl and allow to cool slightly.

Gently but thoroughly  fold the pesto into the pasta mixture, until well-mixed. Taste for seasoning and serve at room temperature. 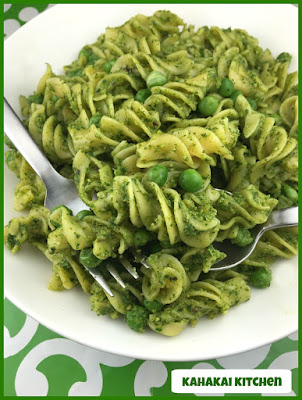 Notes/Results: Fresh, green and flavorful! I like the herby/garlicky/lemony pesto sauce with the contrast of the sweet peas--it's no wonder that it is a popular combination. I also like the tarragon and parsley and between them and the spinach, it doesn't discolor as quickly as a basil pesto does--bonus points for leftovers. The hemp hearts add that extra texture that Parmesan does, but if you don't have them available, you could up the amount of nuts instead, or just use cheese if you aren't eating dairy free. This makes about twice the pesto needed for the pasta but it stores pretty well and is a great topping for veggie noodles, sandwiches and wraps, etc. This ends up being a satisfying plant-based dish with (the 4g of protein in each serving of the corn/quinoa pasta, the roughly 5 g of protein in 1.5 Tbsp of hemp seeds per serving, the 3.6 g per serving in the pistachios, and 3.4 g per serving in the peas) about 17.5 grams of protein total, per serving--not to mention all of the fiber and other nutrients. It's also quick to make and tastes great. I will happily make it again. 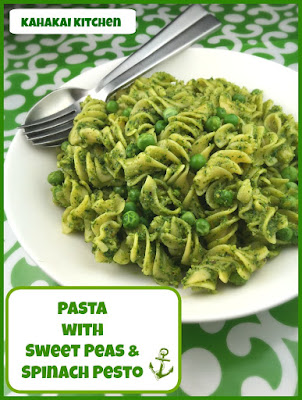 Tomorrow is the deadline for Popeye and Elizabeth will be rounding up the posts on her blog shortly. If you missed this round and love food, movies, and food in movies, join us for the August film, Hotel Transylvania 2, hosted by Kimberly of Coffee and Casseroles.