The Book Tour Stops Here: A Review of "The Precious One" by Marisa de los Santos, Served with Giada's (Very Addictive) Pizza Popcorn

Today's TLC Book Tour stop is The Precious One: A Novel by Marisa de los Santos. It's a sweet read about relationships and the bonds between those we love--our family and our friends. At times moving, at times funny, it is a story that is easy to get caught up and lose track of time while reading. I have partnered it with a recipe for Pizza Popcorn, inspired by a scene in the book. Fitting, because it is a dish that is easy to get caught up in (some might call it addicting) and lose track of how just much popcorn you have consumed. 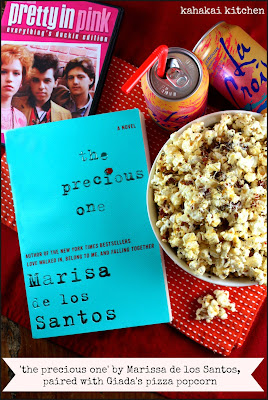 From the New York Times bestselling author of Belong to Me, Love Walked In, and Falling Together comes a captivating novel about friendship, family, second chances, and the redemptive power of love.

In all her life, Eustacia “Taisy” Cleary has given her heart to only three men: her first love, Ben Ransom; her twin brother, Marcus; and Wilson Cleary—professor, inventor, philanderer, self-made millionaire, brilliant man, breathtaking jerk: her father.

Seventeen years ago, Wilson ditched his first family for Caroline, a beautiful young sculptor. In all that time, Taisy’s family has seen Wilson, Caroline, and their daughter, Willow, only once.

Why then, is Wilson calling Taisy now, inviting her for an extended visit, encouraging her to meet her pretty sister—a teenager who views her with jealousy, mistrust, and grudging admiration? Why, now, does Wilson want Taisy to help him write his memoir? 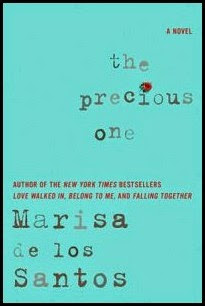 I really loved Marisa de los Santos's first two novels; Love Walked In and the followup, Belong to Me. I wasn't quite as fond of Falling Together, her third novel that came out in 2012, feeling as though I didn't connect as much with the three characters in a friendship triangle. The Precious One may just be my favorite of all of the author's work. It is the story of family, centered around two half-sisters Taisy and Willow, who have spent the past sixteen years forming opinions and resentments about the other until they are thrust into each other's lives when their father 'summons' Taisy to come visit. The story is told from the viewpoint of both sisters. Taisy, at 35, has been estranged from her father since he cheated on her mother and started his new family with young wife Caro and daughter Willow. She has spent her life longing for some sign of affection and love from him. Willow, is 16 but not in any way a typical teenager, having been isolated (and in his mind protected) by her father. In many ways she is naive, in other ways much older than her years from the high expectations of her father and the need to take care of her distracted and somnambulist (sleepwalker) mother. Willow has no intention of sharing her place as daughter with Taisy. The author wrote both characters well, with clear and distinct voices and their relationship is the heart of the book, making the romance(s) secondary.

Marisa de los Santos excels at writing about women and families (those we are born into and those we create) with humor, heart, and great affection. I did miss getting to know the supporting characters more--even Wilson, the father, who was a complete ass without much redemption in my opinion, even once his secrets were revealed. I especially wanted to spend more time with Caro--Willow's mother, and Marcus--Taisy's brother and Willow's half-brother, to understand and appreciate their stories. Hopefully this won't be the last we see of some of these characters. Here's to Marisa de los Santos revisiting them in a followup, like Belong to Me was for Love Walked In. If she does, sign me up please. The Precious One was a good escape that flew by and left me feeling happy at the end.

Author Notes: Marisa de los Santos has published three New York Times bestselling novels for adults, including Love Walked In and Belong to Me, while David Teague is the author of the picture books Franklin’s Big Dreams and Billy Hightower. Saving Lucas Biggs is their first joint venture. Married for over twenty years, Marisa and David live with their two children, Charles and Annabel, and their Yorkies, Finn and Huxley, in Wilmington, Delaware.
Connect with Marisa on Facebook and Twitter. 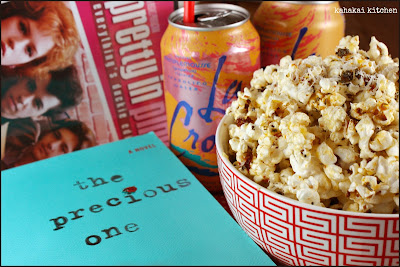 Marisa de los Santos's books usually have at least some elements of food in them and The Precious One certainly did. Dishes like as 'fancy' store-bought salads including one made of artichoke hearts, chickpeas, arugula and feta cheese, a coffee cake thick with apple chunks, espresso in tiny black cups and lemon ricotta cookies on square black plates, butternut soup with mushrooms from the neighborhood grocery, pizza and fries for sisterly bonding, a plethora of pies for an awkward Thanksgiving dinner, and some after-the-dance bacon pancakes were all appealing. I was leaning toward the salad or the apple cake but then I got inspired by one of my favorite parts of the book--when Taisy and Willow's mother Caro help her get ready for her first date and first school dance including watching the 80's classic Pretty in Pink while eating pizza and popcorn and drinking grapefruit soda.

"But I stood firm, and they gave up after minimal hounding, probably because I submitted to the rest: hair, dress, nails, shoes, jewelry, makeup, the crash courses on popular music and how to pin a boutonniere (both taught by Taisy of course), and a pool house viewing of a film called Pretty in Pink during which popcorn, pizza, and fancy grapefruit soda (my first soda experience!) flowed like milk and honey."

Willow, The Precious One by Marisa de los Santos. 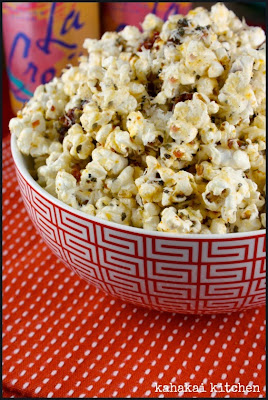 So, popcorn and pizza on the mind, I started thinking about pizza-flavored popcorn. I had seen a couple of popcorn recipes from Giada de Laurentiis, made in a covered kettle and that featured cheese and herbs that I knew I could make pizza-ish. Then, I got smart and simply typed in Giada Pizza Popcorn and... she actually had a recipe for a version on Food Network. Love that! ;-) The recipe sounded good to me and I had everything I needed to make it--always a win. In addition to owning a copy of Pretty in Pink, I also happen to frequently stockpile LaCroix sparkling water in Pamplemousse (aka grapefruit), so the fancy grapefruit soda part of the scene was covered.

I did change the quantity of many ingredients up a bit (noted in red below) and remembered my sun-dried tomatoes were in fact, oven-dried and not in oil which led to a 'chunkier' texture when coupled with using my mini-chopper to blend instead of dragging out my larger food processor and locating the small bowl insert that I almost never use. I hesitate to call it a 'failing' because I actually like the little pieces of sun-dried tomato mixed into the popcorn however, if you desire, you can get the paste smoother and bits smaller if you do it properly to Giada's suggestions. ;-) 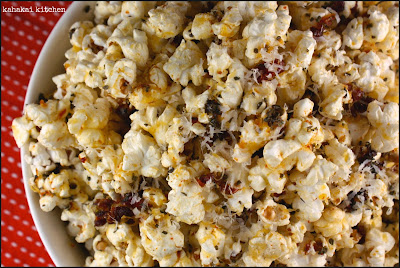 In a food processor, puree the butter, tomatoes and garlic until it forms a smooth paste. Heat a small saute pan over medium heat and add the butter mixture. Heat the butter until melted down and fragrant, about 3 minutes. Keep warm.

Pour the popped popcorn into a large bowl. While still warm, add the flavored butter, cheese, oregano and salt. Toss to coat, and then serve. 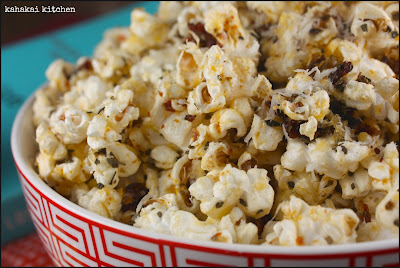 Notes/Results: This pizza popcorn is pretty delectable and is very well addicting. (Says the girl who grazed her way through at least three of the four servings while writing this review post.) I don't think it is really in my defense to say that it was my dinner. ;-) With the garlic, cheese, oregano and tomato, it does have a very pizza-ish taste. I am sure you could adapt it to include some pepperoni in that compound butter, or some crushed red pepper flakes if you are a fan. I am even going to play around with a vegan version using nutritional yeast and vegan 'butter.' It is quite easy to make popcorn in the covered kettle/Dutch oven, just make sure to shake it periodically so that it doesn't burn. I also have an air popper, or if you are really lazy, you could use a plain, microwave popcorn or put some unpopped kernels in a brown paper bag and pop your corn that way before mixing in the toppings. A bit messy to eat, but well worth it when you want to jazz up movie night. I will happily make this again. 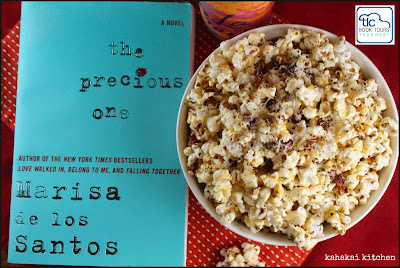 It's Potluck week at I Heart Cooking Clubs--a chance to make any recipe from any of our previous IHCC chefs, so I am linking up Giada's Pizza Popcorn there. You can see what everyone else made for Potluck by checking out the picture links on the post. 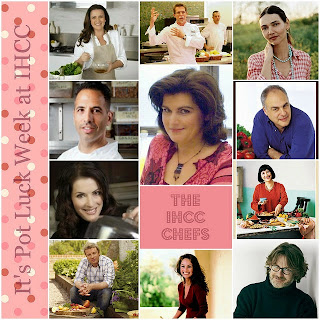 Note: A review copy of "The Precious One" was provided to me by the publisher and TLC Book Tours in return for a fair and honest review. I was not compensated for this review and as always my thoughts and opinions are my own.