Nigella's Farro Risotto with Mushrooms and Leeks {One Photo Friday}

It's Mystery Box Madness Challenge week at I Heart Cooking Clubs where we make a dish from Diana Henry or any former IHCC chef that must include at least three mystery ingredients out of a list of ten.

Initially, I was thinking of mushroom soup with the mushrooms, leeks and thyme but most of the recipes from our IHCC chefs seemed to have mostly mushrooms and thyme or mushrooms and leeks, and not all three at once. I could have swapped the leeks in for onions of course but I like the challenge of finding a recipe that already has the challenge ingredients that I need. My thoughts then went to mushroom risotto as you often find leeks there and viola... Nigella Lawson's recipe for Farro Risotto popped up. Not only did it have the thyme, leek and mushroom (crimini, porcini and porcini broth) combination that I was looking for, it added a fourth March MBM ingredient--ricotta. Winner, winner, risotto dinner! 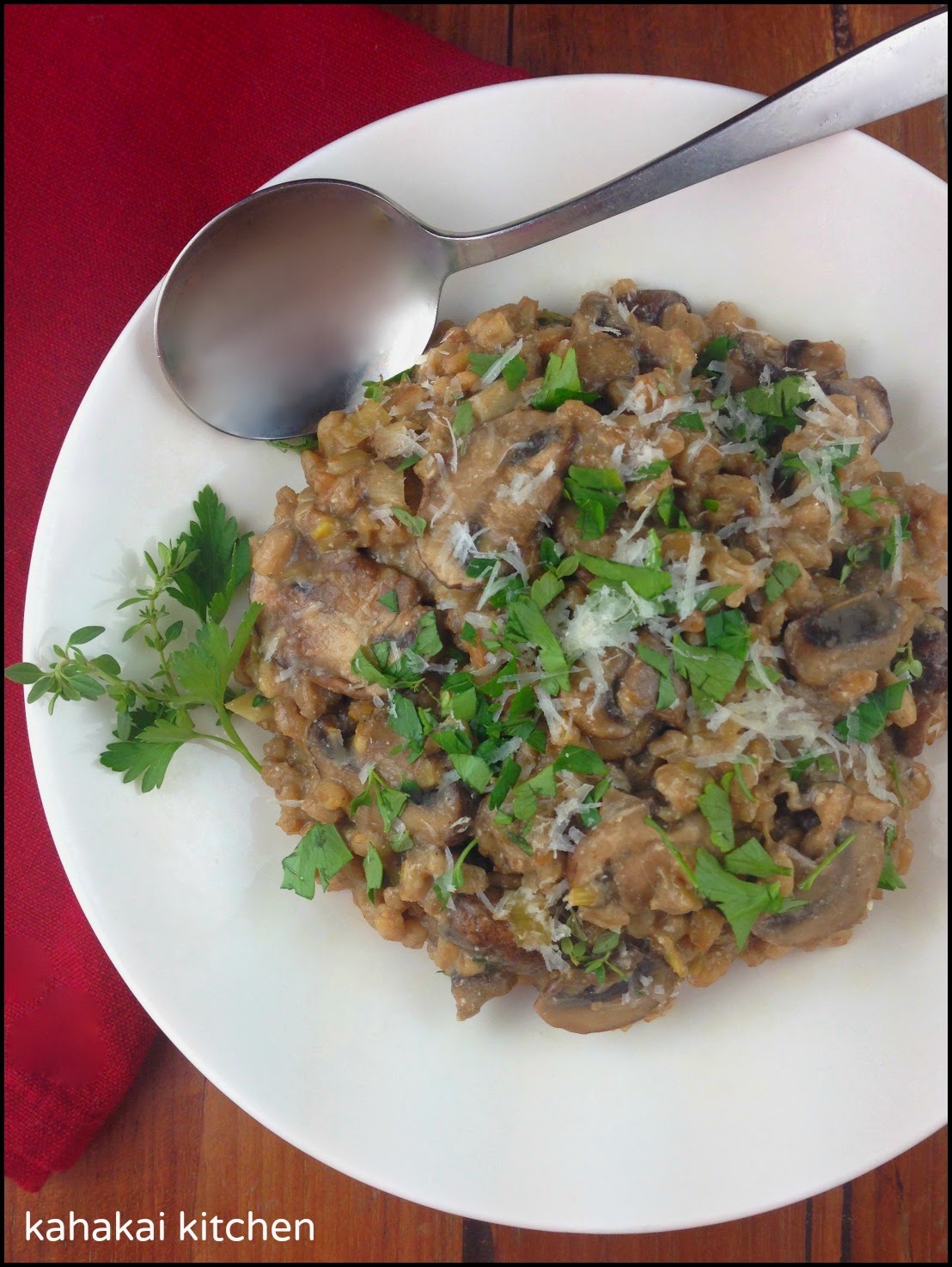 Nigella says, "I'm on a campaign to make farro more widely known. For many of us it's a new food, but it dates back to the Etruscans. It's a fabulously easy way of making risotto because you don't need to stir it—you just put a lid on. And you can make it in advance. You feel that you're having the most indulgent Italian food, but it's a whole grain, so it's healthy. Afterward, it gives you a slow release of energy, and you aren't going to feel that sense of white-carb fatigue."

Farro Risotto with Mushrooms and Leeks
Adapted From Nigella Lawson via Health.com
(Serves 4-6)

Cover the dried porcini with 1/2 cup of recently boiled water, then fill the kettle and put it on the heat again if you are making up the broth with concentrate, cube, or powder. In a wide, heavy saucepan (that comes with a lid) add 2 tablespoons of the oil and the fine jade tangle of leek, and cook, stirring frequently, for about 5 minutes or until the leeks are softened.

Drain the porcini, reserving the soaking liquid, then chop them and add them to the pan. Stir well, then add the farro and turn it gently but thoroughly in the pan. Tip in the Marsala and porcini-soaking water and let it bubble up.

Make up the broth as wished and add this to the farro pan, stir, bring to a boil, and then clamp on a lid, turn down the heat, and let it cook at a simmer for 30 minutes, until the farro is cooked and all the liquid absorbed. (Note: I had to cook my farro about another 10 minutes with the lid off to absorb all of the liquid.)

While the farro is cooking, warm the remaining 2 tablespoons oil in a medium-sized frying pan and cook the sliced crimini mushrooms for about 5 minutes or until they begin to soften (they will first seem alarmingly dry) at which point add the thyme, grate in (or mince and add) the garlic, and cook for a further 5 minutes or until the mushrooms are juicy and soft. Remove from the heat if there is still time on the clock for the farro. Once the farro is cooked, take it off the heat, too, and add the cooked mushrooms. Stir in the ricotta and Parmesan (they will melt in the heat of the farro) until the farro is creamy, then sprinkle with parsley and serve.