The Book Tour Stops Here: A Review of "The Daughter" A Novel by Jane Shemilt, Served with Curried Coconut Fish & Potato Stew

Today's TLC Book Tour stop dives deep into drama, the trauma of a missing child, and how secrets can break a family apart. The Daughter by Jane Shemilt, is a psychological mystery novel that asks the question, "How well do you really know your family?" It is served up today with a recipe for a mild-but-flavorful Curried Coconut Fish & Potato Stew inspired by the book. 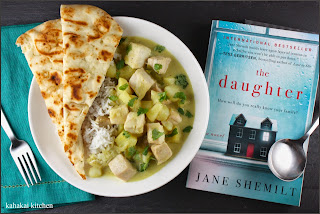 
Jenny is a successful family doctor, the mother of three great teenagers, married to a celebrated neurosurgeon.

But when her youngest child, fifteen-year-old Naomi, doesn’t come home after her school play, Jenny’s seemingly ideal life begins to crumble. The authorities launch a nationwide search with no success. Naomi has vanished, and her family is broken.

As the months pass, the worst-case scenarios—kidnapping, murder—seem less plausible. The trail has gone cold. Yet, for a desperate Jenny, the search has barely begun. More than a year after her daughter’s disappearance, she’s still digging for answers—and what she finds disturbs her. Everyone she’s trusted, everyone she thought she knew, has been keeping secrets, especially Naomi. Piecing together the traces her daughter left behind, Jenny discovers a very different Naomi from the girl she thought she’d raised.

Jenny knows she’ll never be able to find Naomi unless she uncovers the whole truth about her daughter—a twisting, painful journey into the past that will lead to an almost unthinkable revelation. 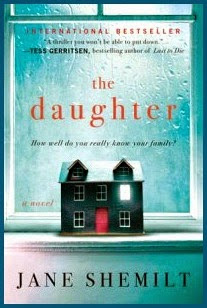 I liked The Daughter but I didn't love it. I think it had to do with the characters and the pacing. As sympathetic as I was to Jenny's circumstances--the loss of a daughter, the worry of wondering what happened and if Naomi was still alive, and the disintegration of her marriage and the family unit, it was hard to attach to her. The story is told from Jenny's point of view and moves back and forth from the days before and after Naomi's disappearance to a year later, as Jenny has taken refuge in her family's cabin--trying to simultaneously distance herself from her pain, while working to uncover what happened to her daughter. Because the book is so centered on Jenny's experience, the other characters don't make much of an impact, and even as secrets unfold, it was hard to know the rest of the characters and their motivation in any substantial way. I felt that the book started off strong but that the tension that was built so well at the beginning faltered through the middle of the book. That tension picked back up at towards the end as Jenny and Michael, the detective assigned to the case (and who she has developed a personal relationship with), begin to put the clues together, but then the ending left me somewhat dissatisfied. I can't say much about the end--as it would be a spoiler, but it left more questions than answers. I suppose that since real life is never wrapped up in a neat package, it makes sense--but I expected more of a 'big bang' with the ultimate revelation and it just wasn't there. This is the author's debut novel and I do think she captured the daily life and family drama well, and delved into the mind of a mother who thinks that everything is going well in the lives of her family, then comes to the realization that she has missed the many signs that things are not at all as they seem. I just wish I had felt more of a connection.

Author Notes: While working full time as a physician, Jane Shemilt received an M.A. in creative writing. She was shortlisted for the Janklow and Nesbit award and the Lucy Cavendish Fiction Prize for The Daughter, her first novel. She and her husband, a professor of neurosurgery, have five children and live in Bristol, England.


There is food in The Daughter although it doesn't play a strong role. There are descriptions of meals eaten both before and after Naomi's disappearance--sandwiches, meat casserole, and apple cake. The day before, Jenny scrubs and peels potatoes for a gratin dauphinois. The night of Naomi's play opening Jenny makes a curry with coconut milk for a celebratory dinner, served with naan bread. Later, after the holidays she makes a turkey curry. Jenny's elderly neighbor gifts her eggs that she eats boiled and folded into slices of bread. There is roast chicken and a holiday dinner with corn bread, cranberries and stuffing and Christmas cake. At the family's cabin in coastal Dorset, there are mentions of fish and chips consumed at the local pub. Since no one thing stood out to me, I decided to combine the potatoes, coconut curry, and fish into a simple Curried Coconut Fish & Potato Stew from one of my favorite quick-fix Indian cookbooks, 5 Spices, 50 Dishes by Ruta Kahate. 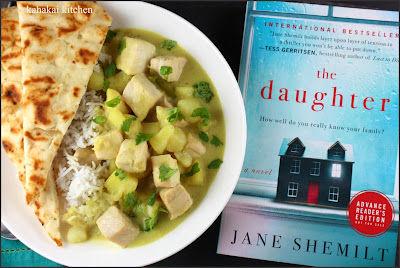 I liked the idea of the vinegar added at the end of the cooking--both to see what it did to the flavor of the curry as well as the small nod to fish and chips consumed in the book. This is a mild curry, but that works well with the flavors. The author recommends thicker cuts of catfish or cod, I like to go local when possible and used a lovely Opah (moonfish) fillet. It is so tender and almost sweet in flavor that it is perfect for a fish stew. 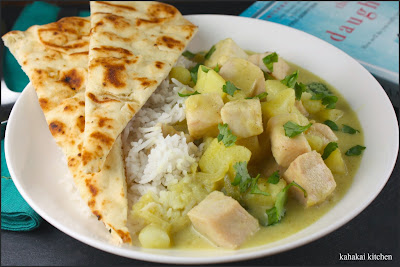 Ruta Kahate says, "The addition of the vinegar at the very end of cooking helps to round off and balance all the flavors in the curry."

Heat oil in a large pan over medium-high heat and saute onion until golden. Add turmeric, curry powder, chiles, garlic, and ginger and stir. Add potatoes and stir until they are well-coated with the oil and spices, about 2 to 3 minutes. Add water and 1/4 tsp of the salt and bring to a boil. Cover, reduce heat, and simmer until potatoes are tender--about 15 minutes.

Add the coconut milk, fish and remaining salt and simmer until fish is opaque and cooked through but still springy to the touch, about 5 minutes. Stir in the vinegar and let sit for 5 minutes. Taste for seasoning and serve, garnished with cilantro if desired. 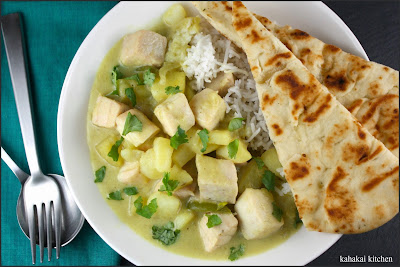 Notes/Results: The beauty of fish stew or curry is in how quick and simple they are to make and this one was no exception. I cut the potatoes slightly smaller than suggested which sped up the cooking time a bit more. The potatoes and coconut milk give it a very creamy texture and make the gravy wonderful for soaking up rice or naan. The opah was perfectly tender and juicy and although generally mild, there is a touch of heat in the end notes from the serrano chiles. Although you don't taste the vinegar, (and I actually added more than the recipe stated) it does add that brightness that gives an extra dimension to the flavor. I also added the curry powder to the turmeric in the recipe because I did want a bit more curry flavor. I served it with plain basmati rice and garlic naan, grilled on my grill pan, as there was plenty of extra sauce to soak it up. It made for an easy weeknight dinner, particularly appreciated on a cool, rainy evening. I would make this again. 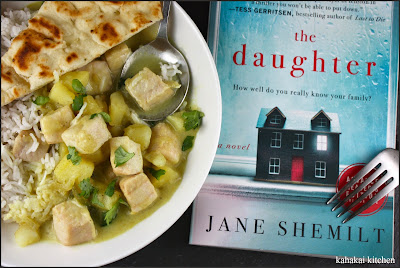 Note: A review copy of "The Daughter" was provided to me by the publisher and TLC Book Tours in return for a fair and honest review. I was not compensated for this review and as always my thoughts and opinions are my own.


You can see the stops for the rest of this Book Tour and what other reviewers thought about the book here.