Smells like heaven, looks and tastes like sunshine. This is a simple Diana Henry recipe from A Change of Appetite. I have had it tagged to make since first seeing the stunning colors in the photo in the book. Zosia made it a couple of months ago and that sealed the deal. So beautifully fragrant while it's cooking with the scents of citrus, cardamom, saffron, orange flower water, warm toasted almonds, and honey wafting through the kitchen. Diana suggests it as a dessert but I ate mine first as an afternoon snack, then again the next morning, for breakfast. 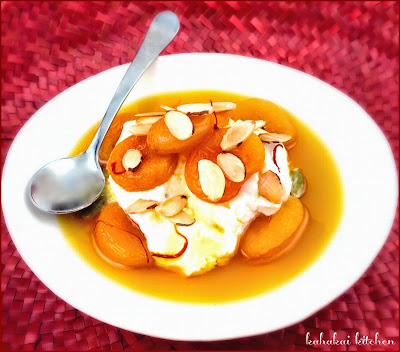 Diana Henry says, "A really simple dessert that looks beautiful. If you don't usually like saffron, try it anyway--it's quite subtle and provides much of the visual impact."

To Serve:
1 cup Greek Yogurt (I increased the yogurt amount to about 1/2 cup per serving)
2 Tbsp toasted slivered almonds

The night before you want to eat it, put all of the ingredients for the apricot compote into a small saucepan along with a generous 1 cup of water and bring slowly to a boil. Reduce the heat immediately to a simmer  and cook for 10-15 minutes. It's important that you keep an eye on them because some dried apricots are softer than others and you don't want them to fall apart (although it's fine if some do). Sometimes it takes 10 minutes for them to soften and plump up, sometimes a lot longer. You want to end up with fat apricots in a syrup. If the syrup is too thin (it depends on how long the apricots have cooked), remove them with a slotted spoon and boil the juices until they get thicker before returning the apricots. Let them cool in the syrup, then put it into a bowl, cover, and let stand overnight (remove the strips of zest before serving). You can keep the apricots, covered, in the refrigerator for a week.

It's best to prepare the honey syrup the day before, too, because the saffron continues to flavor it. Put two tablespoons of boiling water into a teacup or coffee mug and add the saffron. Stir well to release the saffron's color and flavor, then add to the honey along with the orange flower water. Mix together, then cover, and let stand overnight.

To serve, put the apricot compote into little glasses or bowls, top with some of the yogurt, then spoon the saffron honey over the top. Sprinkle with almonds and serve. 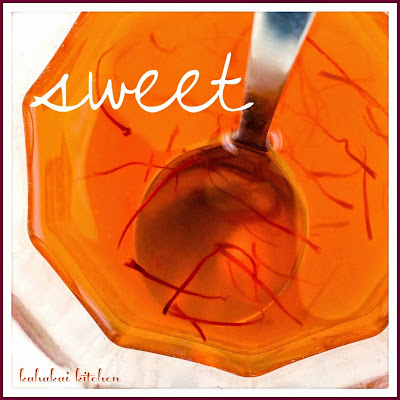 Notes/Results: Such a fabulous combination of flavors--the sweet syrup and compote--full of exotic flavor, contrast nicely with the tartness of the Greek yogurt and the toasted almonds. The floral notes and saffron are clearly present but don't overpower the other ingredients. I didn't have orange blossom honey so I used a local blend called Rainbow Blossom which is a mix of different flowering trees from organic farms and rainforest sites including Mango, Avocado, Lychee, & Passion Fruit. Diana Henry says that this recipe serves six, but I think it's more like four--and that is with adding extra yogurt. So pretty to look at and enjoyable as a dessert, snack, or breakfast, I would happily make it again. 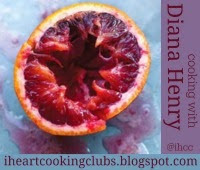 This post is linking up to I Heart Cooking Clubs where this week's theme is Heaven Scent--those aromatic and heavenly-smelling Diana Henry dishes. You can see what everyone made by checking out the picture links on the post at IHCC.

{One Photo Friday: Since I normally drag out my big camera and gear, take a bunch of photos of my recipes, and then spend time obsessing over them--I decided that for Fridays, I'll simplify by posting a recipe or something interesting and then just take (usually) one photo of it with my iPhone--no muss/no fuss.}