I am a fan of a good series--especially one in the mystery/thriller genre. I like getting to know the characters at a deeper level as each story unfolds. The Unforgivable Fix: by T. E. Woods is the third book in the Justice series which gets better and better with each novel. I am excited to be a stop on the TLC Book Tour for The Unforgivable Fix today, and to offer up and review and a dish inspired by the book. 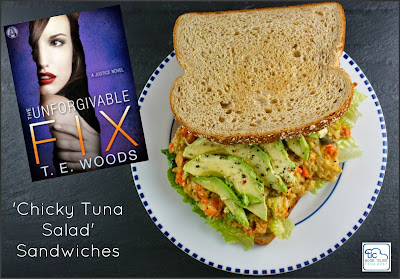 The killer won’t come for you, you fool. He’ll come for me.

Detective Mort Grant of the Seattle PD has finally decided to sell. The home where he and his late wife raised two kids feels too large and too full of old memories. His son is married and raising a family of his own, and despite desperate efforts to find her, Mort has lost touch with his wayward daughter. That is, until the day she walks back into her childhood home and begs for his help.

For the last four years, Allie Grant has been the lover—and confidante, confessor, and counselor—of one of the world’s most powerful and deadly men. But a sudden, rash move has put Allie in the crosshairs of a ruthless Russian crime lord. Mort knows of only one place where Allie will be safe: with The Fixer.

As a hired desperado, The Fixer has killed twenty-three people—and Mort was complicit in her escape from the law. She has built an impregnable house, stocked it with state-of-the-art gear, armed it to the teeth, and locked herself away from the world. But even The Fixer may not be able to get justice for Allie when real evil comes knocking. 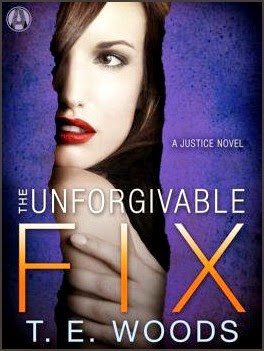 Like any great series with well-written characters, you will want to start with the first book, The Fixer, to get the background on the characters and see how things evolve. (You can read my Book Tour review of The Fixer accompanied by an easy chocolate hazelnut mousse recipe here.) In between book tours, I caught up with the second book, The Red Hot Fix which I reviewed on Goodreads here. The Unforgivable Fix is the third book in the series and the action doesn't let up. Mort's guilt and sadness over his missing daughter Allie has been brewing and when she shows up running from her drug czar lover and the Russian that he started a war with, Mort wants to protect her--no matter how it could cost him. Stashing her with (spoiler alert--if you haven't read the first book) Lydia seems the best way to keep her alive. Lydia is immediately on guard, having someone much to close for comfort to the secrets she has hidden in her house from her time as "The Fixer"-- not to mention her dislike and distrust of Allie and her motives. Lydia seems to be slowly putting her life together, restarting her practice and working with a psychology grad student as a favor for a friend but the guilt over her past keeps creeping in.

I love both Lydia and Mort, and their relationship--which feels real based on the ups and downs they have with each other. I like how the action is divided between both characters and it felt more equally divided in this book than the first two. There is also more than one story going on--in this case the secondary story line involves a troubling molestation case. As in the other books, the edges between 'right and wrong' are blurred, that moral ambiguity is something both Lydia and Mort struggle with. Author Woods keeps the pace fast and the twists and turns coming, making for a quick and tension-filled read. If you haven't discovered this series yet, and love taut, dark, and well-written thrillers give it a try--you'll fall for The Fixer too. I am impatiently waiting for the next book!

Author Notes: T. E. Woods is as eager as her fans to return to the thrilling world of the Justice series. She’s busy writing the next installment and is developing a new series set in Madison, Wisconsin.

Although there are usually more bodies than meals in this series, there are certainly mentions of food throughout. Lydia is fond of lattes with honey--especially from the Olympia coffee shop of Oliver, the man she wants but cannot let herself get close to because of her past. Mort makes chili with two secrets--"The first is to use both beef and pork.The second is to add one tiny habanero pepper." Lydia cooks a simple steak, veggies and rice, and Allie makes a special beef dish she learns in the islands with veggies and beans, and a dessert of peaches broiled in a brandy sauce, served warm over vanilla ice cream. It all sounded good but in the end, I decided to take inspiration from tuna sandwiches. Allie and her mother, Mort's deceased wife Edie, used to linger over tuna salad sandwiches after shopping, and Lydia makes tuna sandwiches for lunch with the grad student she is supervising for his clinical practice. 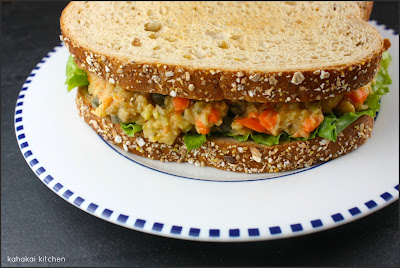 Although I stay away from meat and poultry, I eat fish a few times a week and I make a tasty tuna sandwich myself (capers are the key) but, I have been wanting to try the vegan Chicky Tuna Salad' Sandwiches from Isa Does It by Isa Chandra Moskowitz and this seemed like a good opportunity to make them. Also, in these books everything is not always as it seems so the mock-tuna salad is a nod to that. They aren't in Isa's recipe but I just had to add some capers to mine. ;-)

Moskowitz says, "Chickpeas have a soft meatiness and then the little pieces of sunflower seed provide some bite. Carrots and celery stud the salad with lots of fresh crunch."

Cut carrot, celery and onion into large chunks and place in food processor. Pulse until veggies are chopped but not pureed. Pieces should range from pea-size to chickpea-size. Transfer mixture to a mixing bowl, scrapping down the sides of the food processor bowl to get as much as possible.

Place chickpeas and sunflower seeds in the food processor and pulse until a somewhat chunky mash--with bits of whole chickpea left. Transfer to mixing bowl and combine with the veggies.

Serve on (multigrain preferred) bread or toast with garnishes or on top of romaine leaves. Enjoy! 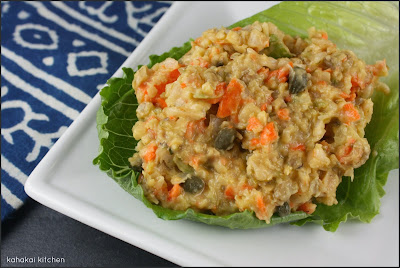 Notes/Results: Although they are not likely to get mistaken for tuna sandwiches, this chickpea-sunflower mixture is full of great flavor and texture. Between the dulse seaweed flakes and the capers, it definitely has an appealing briny taste. I served mine on a multigrain oat bread, toasted with romaine and sliced avocado. The creaminess of the avocado went well with the crunchier salad and toasted bread. With an apple, it made a healthy and fiber-filled lunch and the leftovers hold up well for a few days making it great to make ahead and have on-hand for weekday lunches. I will make this again. (Note: Chickpeas also make a yummy mock chicken salad--check out this Deli-Style Chickpea Salad Sandwich.) 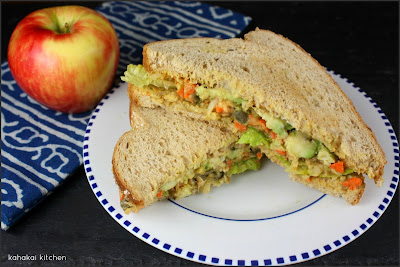 Note: A review copy of "The Unforgivable Fix" was provided by the publisher and TLC Book Tours in return for a fair and honest review. I was not compensated for this review and as always my thoughts and opinions are my own.