The Book Tour Stops Here: A Review of "The Lost Tribe of Coney Island" by Claire Prentice with (a Vegan Version of) Arroz Caldo (Filipino Rice Stew)

Much of America has an obsession with people and things that are different or that we don't understand. We have a strong carnival and circus history, hitting its peak in the 19th century. Even today, FX's American Horror Story: Freak Show premiered last week with the highest ratings on that network's history--proving that we still like to gawk. In the summer of 1905, it was a tribe of Philippine aborigines that had America lining up in record numbers, and their story is told in today's TLC Book Tour Stop of "The Lost Tribe on Coney Island: Headhunters, Luna Park, and the Man Who Pulled Off the Spectacle of the Century" by Claire Prentice. 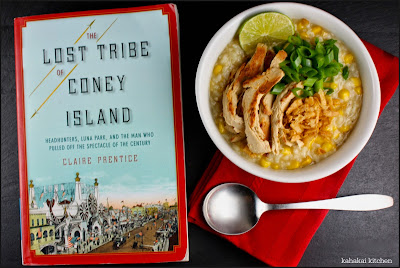 Coney Island, summer 1905: a new attraction opened at Luna Park. Within weeks it would be the talk of the nation.


For the first time, The Lost Tribe of Coney Island unearths the incredible true story of the Igorrotes, a group of “headhunting, dog eating” tribespeople brought to America from the Philippines by the opportunistic showman Truman K. Hunt. At Luna Park, the g-string-clad Filipinos performed native dances and rituals before a wide-eyed public in a mocked-up tribal village. Millions of Americans flocked to see the tribespeople slaughter live dogs for their daily canine feasts and to hear thrilling tales of headhunting. The Igorrotes became a national sensation—they were written up in newspaper headlines, portrayed in cartoons, and even featured in advertising jingles, all fueled by Truman’s brilliant publicity stunts.

By the end of the summer season, the Igorrote show had made Truman a rich man. But his genius had a dark side and soon he would be on the run across America with the tribe in tow, pursued by ex-wives, creditors, Pinkerton detectives, and the tireless agents of American justice.

At its heart, The Lost Tribe of Coney Island is a tale of what happens when two cultures collide in the pursuit of money, adventure, and the American Dream. It is a story that makes us question who is civilized and who is savage. 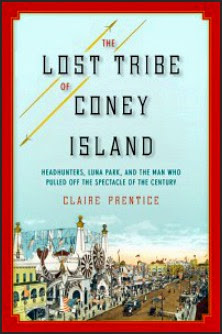 I wanted to be on this book tour because I found the subject matter fascinating--the tribe themselves, the sideshow culture, Coney Island at the turn of the century--and it was a true story. It turned out to be an absorbing, albeit disturbing book because of the exploitation of the Igorrotes by Truman Hunt and many others. The amount of research that that Claire Prentice put into the book, tracking down information across America, Canada and The Philippines is pretty incredible and the challenge to spin out that level of detail and combine it with her own conjecture to create a readable story must have been daunting--but overall, it works. The book did start slow for me (I kept putting it down and picking it back up again) as the story and players were set up and it was tough to keep all of the detail straight. (There is a cast of characters list in the front of the book that was helpful to keeping track of most of the main players.) About halfway through, the pace picks up as Truman Hunt's true colors come to light and he turns from an almost avuncular caretaker who, while first and foremost out to make a buck--or many bucks, still seems to care somewhat for his charges, to an abusive drunk and a force of pure evil who cares for no one but himself. The final third of the story is a page turner as Hunt is tracked down and put on trial and the reader anxiously waits to see if justice is served and the Igorrotes get to finally go home.

The cover blurb says "It is a story that makes us question who is civilized and who is savage"--and how true this statement is. The Igorrotes, known to be a industrious and mostly peaceful people, are completely sensationalized for publicity and ticket sales and treated extremely badly. It takes quite a while for the American government to step in to investigate the situation--likely in part due to how portraying the tribe as savages, supported the viewpoint that The Philippines was not ready to govern itself after the Spanish-American War. It made me angry, it made me embarrassed for our country, and it made me shake my head many times. A very dark, and not a proud part of our history, but a colorful and compellingly readable book.

Author Notes: Claire Prentice is an award-winning journalist whose work has been published in The Washington Post, The Times of London, The Guardian, Sydney Morning Herald, BBC Online, Cosmopolitan, and Marie Claire.

Connect with Claire on her blog, claireprentice.wordpress.com. 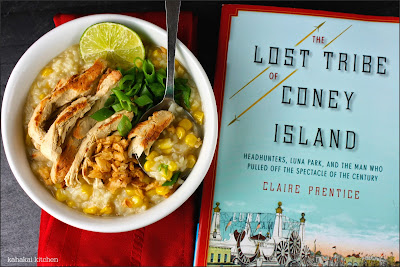 OK, so there is not a lot of great food inspiration coming from this book--but you know how I do love a challenge. ;-) When Hunt's group of Igorrotes are getting food to eat, it is mostly beans, rice and potatoes. The book is pretty graphic in its descriptions of the dog killing, cooking and eating that becomes part of the daily show for the tribe--although in their culture, dog meat was only for special occasions. Sad and not at all appetizing. I was going to do a rice and bean dish or maybe a take on a vegetarian Coney Island hot dog to represent the book but again--too soon for any kind of dog mention for me. Finally, I went with a vegetarian take on a classic Filipino comfort food dish, Arroz Caldo or rice stew. A congee-like porridge with chicken in a gingery rice broth. I came across it in the last book I reviewed (Aunty Lee's Deadly Specials) when it was made by the main character's Filipino housekeeper / assistant. 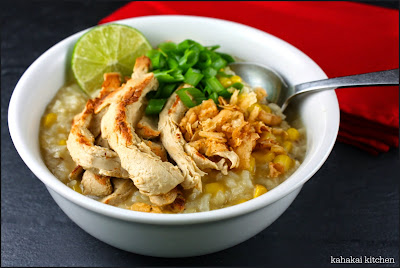 For my meat-free version, I used mock-chicken and I added corn because it was mentioned that the Igorrotes missed "the juicy maize and the sweet camotes (sweet potato) they could pick or dig up from the soil whenever they wanted them at home." As Julio, the translator and care-taker of the tribe tried to get fresh vegetables and "even a little chicken" for this charges when he could, it doesn't seem out of the realm of possibility that they could have made arroz caldo on occasion. In order to make it completely meat-free, I used a mock chicken stock and made up a batch of a homemade vegan 'fish sauce' recipe from One Green Planet that I have been wanting to try.

Arroz Caldo (Filipino Rice Stew)
Inspired by this vegan recipe and this non-vegan one ;-)
(Serves 2-3)

In a heavy pot, heat oil over medium heat and add onions, ginger and garlic. Cook,  about5 minutes, stirring regularly, until onion is translucent.

Add rice, stirring to coat the grains with oil. Cook, stirring frequently, until rice starts to lightly brown. Add broth and bring to a boil.

Lower heat and covering pot, simmer, stirring occasionally, about 25-30 minutes, or until the rice has softened and the porridge has thickened to desired consistency. Stir in corn, add extra broth as needed and cook a few minutes more. Stir in vegan fish sauce and season with freshly ground black pepper to taste.

To serve: Ladle the arroz caldo into bowls and garnish with mock-chicken strips, scallions, and fried garlic or onion bits. Serve with lime or calamansi wedges and extra fish sauce. 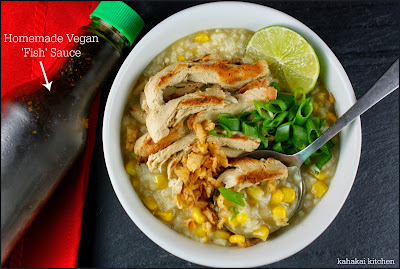 Notes/Results: Filling, comforting, and pretty tasty. The ginger, garlic and fish sauce take care of any blandness I was worried about. Speaking of the fish sauce, I have two bottles of regular fish sauce in my fridge but I like this easy-to-make-vegan version even better--it adds plenty of umami but doesn't overpower (or smell!) like fish sauce does. I'll definitely be making it again. The corn was a good addition for its bursts of sweetness in all of that salty/savory. The mock-chicken strips (I used Morningstar Farms Chik'N Strips) were a bit dry (could be my cooking or how long they have been in my freezer) ;-) but pretty chicken breast-like in texture and flavor. The head of garlic I had was rotten so instead of fried garlic bits, I subbed in some fried onion pieces, chopped, to still have the crispy bites, and although sometimes I can find calamansi--when I actively look for it there is none to be found, so I subbed in lime. All in all, an easy dish and a fun vegan variation that I would make again. 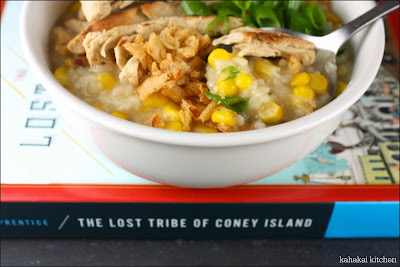 Note: A review copy of "The Lost Tribe of Coney Island" was provided by the publisher and TLC Book Tours in return for a fair and honest review. I was not compensated for this review and as always my thoughts and opinions are my own.