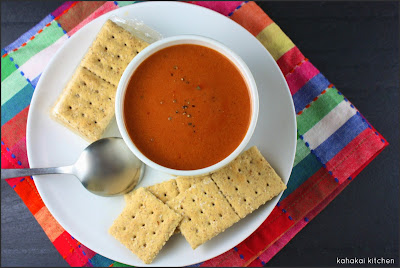 I wouldn't normally make tomato soup out of ketchup but this Creamy Tomato 'Ketchup Soup' is in honor of October's Food 'N Flix pick of The Terminal, hosted by Evelyne of Cheap Ethnic Eats. If you haven't seen it, The Terminal is a 2004 comedy-drama directed by Steven Spielberg, starring Tom Hanks, Catherine Zeta-Jones, and Stanley Tucci, 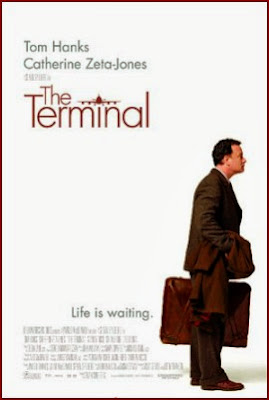 The movie tells the story of Viktor Navorski (Hanks), who is flying to New York via the JFK airport. While trying to clear customs, Viktor finds that his passport is invalid because of a civil war breaking out in his home country of Krakozhia. Because he is currently "a citizen of nowhere"--he has to remain in the International arrivals area of the airport until further notice. He is given a pager and food vouchers that he quickly loses and is left to pretty much fend for himself while the acting head of customs (Tucci) plots ways to get rid of him.  Meanwhile Viktor makes friends with some of the airport employees and meets Amanda, a romantically-challenged flight attendant (Catherine Zeta-Jones). For some reason, I don't think I had ever seen the entire film--just caught bits and pieces of it on cable, which is a shame because it is a charming and fun film. 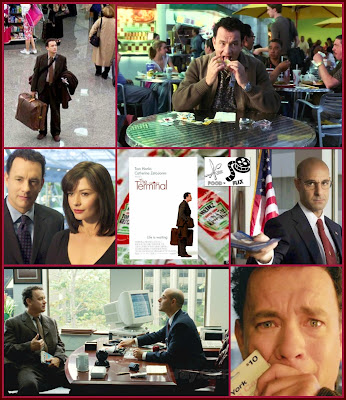 Anyone who has ever been delayed in an airline terminal for any length of time will empathize with Viktor. They are not a fun place to be stuck for several hours, let alone several months. Most of the food inspiration in the film can be found in the food court, or on the trays of the airline meals that Enrique, a food service driver bribes Viktor with to gather information about an immigration officer that Enrique admires from afar. When broke, Viktor makes his own meals from the food court condiment bars, graduating to Burger King when he discovers that he can earn quarters from the cart return machine.

I personally find most airport terminals to be freezing cold (with the exception of the airports here) ;-) so if I had to resort to making a meal from packaged condiments, I would choose something warm instead of the cracker 'sandwiches' that Viktor makes. But, I did start thinking about those crackers and ketchup packets and found some interesting recipes for 'ketchup soup'--made up of ketchup packets, hot water and often sugar, crackers, non-dairy creamer salt and pepper--if one is given a plentiful enough condiment bar. Apparently it is a good recipe to know if case you are a hobo or it is the Apocalypse. 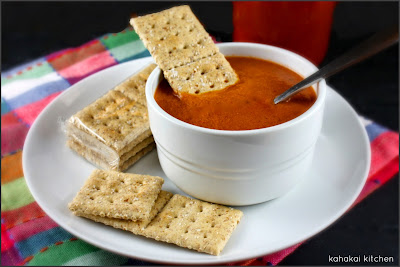 Rather than use ketchup packets, I decided to take it up a few notches by making my own ketchup, and I made it a creamy tomato soup (to diminish the intensity) with non-dairy coconut milk creamer. If I was a better person, I would have made homemade crackers but I went with some packaged saltines to keep with the theme--I chose locally-made Diamond Bakery whole wheat soda crackers.

Sure, at the end of the day, it's really just a simple creamy tomato soup but one with a deep tomato flavor and very quick and easy to make once you have your ketchup of choice. ;-)

Combine ingredients in a medium-large pan, over medium-high heat and briskly whisking to combine ingredients. Bring ketchup to a boil, then reduce heat to low and simmer. Stir, scraping the sides of the sauce pan frequently, until it reaches the desired thickness--about 20 minutes or so. Add additional water if mixture is too thick. If you want a smoother ketchup, you can blend in the extra water with an immersion blender. Taste for seasoning and sweetness level--adding more agave if needed.

Remove from heat and let cool before transferring to a glass jar. Refrigerate. 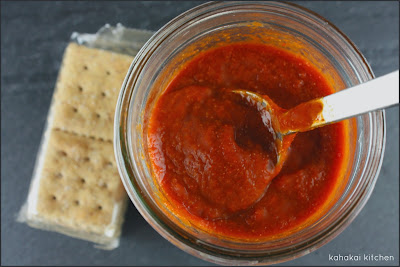 In a medium sauce pan, heat the ketchup and water over medium-high heat, whisking until smooth. Bring soup up to a boil. Reduce heat to medium, stir in non-dairy creamer  and whisk until smooth. Once heated through, season with black pepper and serve with crackers (or a good grilled cheese!). 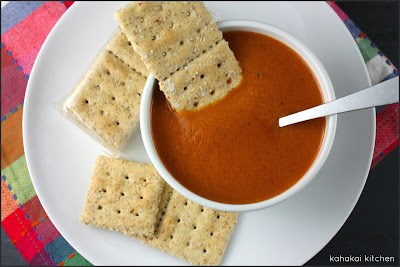 Notes/Results: There is a lot of intense tomato flavor in this soup--why adding milk or cream is needed to mellow the intensity and the tangy bite of the vinegar in the ketchup. But, it is surprisingly tasty--probably due to the flavor of the homemade ketchup--I can't imagine it being very good with packaged ketchup. I liked it even more when I ate it with the crackers and some slices of Tillamook Medium Cheddar--making me think that dipping a grilled cheese sandwich into it would be marvelous. Not my favorite tomato soup ever but, I liked the homemade ketchup I threw together and it was a fun experiment.

The deadline for this month's Food & Flix is tomorrow, Monday, October 27th and Evelyne will be rounding up the entries on her blog shortly after. if you missed this round and like food, films and foodie films, consider joining us for November when I will be hosting the quirky, indie Thanksgiving-centered comedy-drama Pieces of April here at Kahakai Kitchen!

Now lets take a look at who is in the Souper Sundays kitchen and what dishes they brought with them.

It's always lovely to have Corina of Searching for Spice stop by the Souper Sundays kitchen and this week she brings a good-for-you Salmon Miso Soup with Soba Noodles. Corina says, "This is the type of meal you want to make if you are trying to be super healthy. Just eating, even slurping it makes you feel good. Healthy salmon, green vegetables and brown soba noodles in a miso broth. Of course, you could use rice noodles or egg noodles instead but there’s something about brown carbs that just makes you feel virtuous – brown pasta, brown rice, chocolate cake. Sorry, not all brown carbs, not chocolate cake, chocolate biscuits or treacle tart. Or anything with caramel in come to think of it." 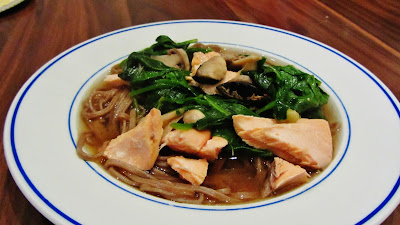 Judee of Gluten Free A-Z Blog shares her take on a gluten free Mushroom Barley Soup and says, "'Im still using mushrooms, but replaced the starchy  barley with a starchy dried bean. I used a baby lima bean. It works great and dried baby lima beans do not taste ANYTHING like a green lima bean.. trust me on that one. The soup is hearty and delicious, just like the soup my mother used to make. This soup is perfect for the colder weather and is extremely satisfying. I think it would also be a nice addition to a Thanksgiving meal." 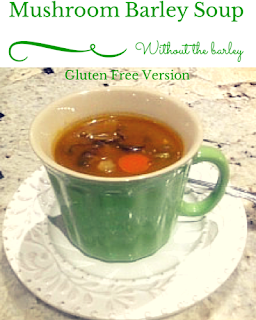 Here's a colorful and Seriously Zesty Bread Salad from Ottolenghi from Joyce of Kitchen Flavours. She says, "Ooh, this is so good! The toasted bread is so crunchy and delicious. I cannot remember the name of the bread that I've made, but it has a light sweetness to it, and extremely delicious when used in this salad! All the veggies and the red onion are wonderfully crisp. This salad is zesty and tangy alright, from the lemon zest and juice, and with the red wine vinegar. And the sumac, I would not skip it! Simply wonderful with the sprinkling of sumac." 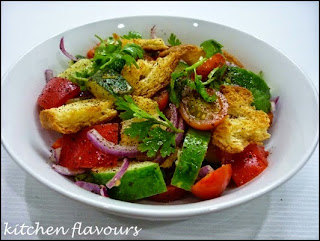 Janet of The Taste Space shares Roasted Cauliflower Salad with Fried Capers and Pickled Currants and says, "Welcome to my latest obsession: fried capers. If you have yet to try them yet, try to imagine how they would taste. Crunchy, salty little nibbles. It surprised me how much they taste like popcorn, I kid you not. Combined with the pickled currants (tart and sweet), and the avocado (creamy!), this salad was perfectly balanced. I know I say that a lot here, but this salad rises above its peers. It could possibly be my best salad of the year." 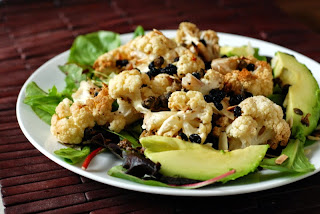 It was a soup, salad and sandwich kind of week here at Kahakai Kitchen. This colorful and wonderfully flavored Orange & Fennel Salad with Pomegranate & Feta by Diana Henry was great on its own or a perfect partner for a piece of simply grilled salmon. I love the colors in this salad--perfect for the holidays, and the sweet, salty combination of flavors. 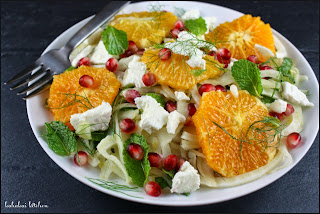 I also made Isa Chandra Moskowitz's 'Chicky Tuna Salad' this week and it was fabulous-- both as a sandwich on toasted multigrain bread with creamy avocado and crisp romaine, or just enjoyed scooped onto romaine leaves. If you are looking for a protein and fiber-filled tuna alternative or just something fun and tasty for your sandwiches, give it a try. 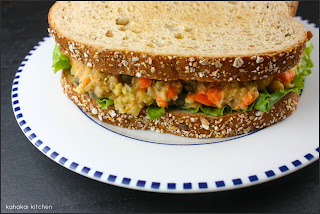 Thanks to everyone who joined in this week. If you have a soup, salad, or sandwich that you would like to share, just click on the Souper Sundays logo on the sidebar for all of the details.