There is something cozy about curling up on rainy day with a sweet regency romance and a cup of tea. In the novel "The Dancing Master" by Julie Klassen, it is a journey to a gentler, more refined time when ladies needed to be accomplished in all of the social graces to make a good match and dancing masters were the means to do that.

Publisher's Book Blurb:
"Finding himself the man of the family, London dancing master Alec Valcourt moves his mother and sister to remote Devonshire, hoping to start over. But he is stunned to learn the village matriarch has prohibited all dancing, for reasons buried deep in her past.

Alec finds an unlikely ally in the matriarch’s daughter. Though he’s initially wary of Julia Midwinter’s reckless flirtation, he comes to realize her bold exterior disguises a vulnerable soul–and hidden sorrows of her own.

Julia is quickly attracted to the handsome dancing master–a man her mother would never approve of–but she cannot imagine why Mr. Valcourt would leave London, or why he evades questions about his past. With Alec’s help, can Julia uncover old secrets and restore life to her somber village…and to her mother’s tattered heart?" 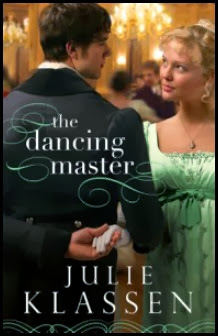 I volunteered to be on the TLC Book Tour for "The Dancing Master" based on my fondness for Jane Austen's novels and their variations and the fact that it was described as having a "Jane Austen-feel." I wasn't familiar with author Julie Klassen's writing and didn't pay much attention to the 'inspirational fiction' tag--to be honest, I generally prefer my books to have a little sizzle and grit. Still, I ended up enjoying the book--it's a sweet romance and I really liked Klassen's attention to detail regarding the customs of the regency period. There are  several twists and turns (some obvious, some not) to the story and unraveling mysteries behind the different characters that help keep it interesting. The characters are not perfect--Julia, the heroine is immature and somewhat spoiled and Alec, the dancing master, is a little timid and tentative in his actions. At first I didn't feel the chemistry between them but, their characters grew and changed through the book and they ended up growing on me. Since it is inspirational fiction, religion does play a role--most prominently towards the end of the book, but it doesn't smack the reader over the head and it fits with the story.

The most fun and intriguing thing about "The Dancing Master" is that rather than conjuring up 'Pride and Prejudice' or 'Emma,' this book kept the songs of the movie Footloose running through my mind. Yep, it's Regency Footloose. Well, not exactly the same story but with many definite parallels. We have a small country town where dancing (and general merry-making) isn't allowed, a mysterious outsider who loves to dance moves in and catches the eye of the rebellious, anxious to get out of town, daughter of the main person preventing the dancing. There are past hurts and tragedy, friends who want to dance and bullies who want to prevent it, disapproving townspeople, young people sneaking out to attend a dance (ball) in another town, and there is even a slightly clod-ish local who befriends the dancing newcomer and has no grace or dancing ability whatsoever. There's a scene in the book where Alec finds a new way to help Walter connect with the dance steps that reminds me of Kevin Bacon and Chris Penn in the movie and I swear that I could not get "Let's Hear It For the Boy" out of my head for hours! Now, I love Footloose, have seen it about a bazillion times over the years and I saw no good reason why they remade it a couple of years ago (Kevin Bacon rules!), so I was pleasantly surprised that this case the Footloose vibes worked and increased my enjoyment in the story.

Those who enjoy mild regency romance, historical fiction and/or inspirational fiction (and appreciate Footloose) and fans of the author's other work are sure to enjoy this one. 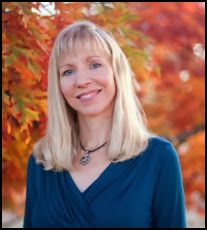 Author Notes: Julie Klassen loves all things Jane–Jane Eyre and Jane Austen. A graduate of the University of Illinois, Julie worked in publishing for sixteen years and now writes full time. She has won the Christy Award: Historical Romance for The Silent Governess (2010) and The Girl in the Gatehouse (2011) which also won the 2010 Midwest Book Award for Genre Fiction. Julie and her husband have two sons and live in a suburb of St. Paul, Minnesota. 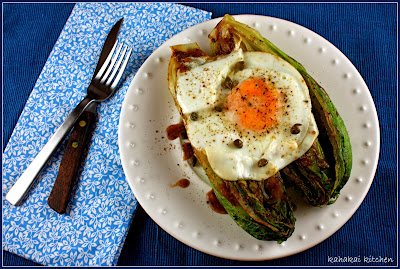 This is not a foodie book although there are brief mentions of food throughout the story--like bakery owner Mrs. Tickle's famous pastry and cake creations, the usual tea, a few dinners and gifts of rose-hip jam and sweets. I was a little stuck on what dish I wanted to make to represent the book and I finally ended up with a salad.

Thinking about the Valcourt family's French origins, I wanted to make a classic vinaigrette dressing but add some capers to it--a nod to 'caper merchant'--one of the derogatory terms used to describe dancing masters that I learned from the book. (Apparently it comes from a French term, marchand des capriolles that translates to something like 'cut papers' or to leap or jump in dancing. Hmm...) ;-) I decided to use that lovely dressing in a simple but wonderful salad that combines two of my very favorite things (next to capers)--grilled romaine and fried eggs with runny yolks. 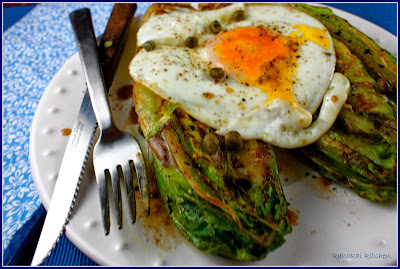 For the salad, I kept it simple--halving and grilling my romaine heart on a stove-top grill pan and frying a local egg in a bit of olive oil. I placed the pieces cut side up on a plate, drizzled them with the caper vinaigrette (recipe below), sprinkling extra capers on and sliding the fried egg on top.

In a bowl or jam jar, combine vinegar and salt. Add minced garlic and let sit in vinegar for 20-30 minutes to soften the edge.

Add mustard and stir until blended. Add a generous grind of black pepper, then pour in olive oil in a slow stream, whisking to emulsify. Add the capers and stir--or cap jar and shake gently to combine. Taste and adjust seasoning to taste.

Notes/Results: This salad definitely tastes much better than the pictures might suggest. It is pretty freaking fantastic in fact--the warm, slightly sweetened lettuce, the tangy dressing and capers mix together well with the runny yolk. Pure bliss on a plate in my book and a salad that really satisfies. The reason for the not so pretty pictures--I just wanted to puncture that yolk and eat the salad while everything was warm. I am thankful that I doubled the dressing recipe and bought the big Costco pack of romaine hearts because I have a feeling I am going to be eating this salad a lot this week. If for some strange reason you don't 'do' runny eggs (I do feel sorry for you--oh, what you are missing!), bust out your grill or pan anyway and make it without the egg--the grilled romaine and dressing are worth it. 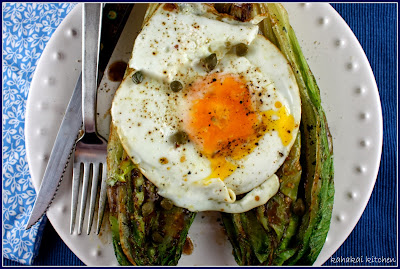 Note: A review copy of "The Dancing Master" was provided to me by the publisher and TLC Book Tours in return for a fair and honest review. I was not compensated for this review and as always my thoughts and opinions are my own