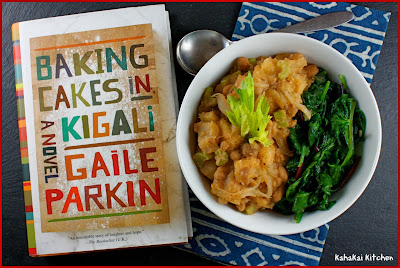 In "Baking Cakes in Kigali: A Novel" by Gaile Parkin, Angel Tungararza is a talented cake maker from Tanzania who moves with her university professor husband Pius and their five grandchildren to modern-day Rwanda. Along with baking and selling her cakes out of her busy international apartment complex, Angel dispenses advice to her customers who come from from all walks of life, listening over cups of cardamom-spiced tea as they share their stories. The stories aren't all pleasant (including Angel's own as she grieves over the deaths of both her daughter and son and the estrangement she felt from her daughter before her death) as this is Rwanda where war, poverty, abuse, genocide, and AIDS are all realities. Still, in the midst of grief and tragedy, there is an overall feeling of hope in the country and in Angel's little corner of it. 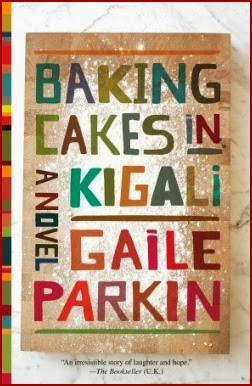 I picked up this novel in a used book store, caught by the title and interested in learning more about different African countries and their history after reading "What Tears Us Apart"--a novel by Deborah Cloyed, set in Kenya in the turmoil following the 2007 government elections. I thought it would be a great chance for our Cook the Books (the bi-monthly virtual foodie book club I co-host along with Rachel, Heather and Simona) participants to journey to Africa--somewhere we have not ventured in our reading. There is a lot going on in the book with the stories told by Angel's friends and customers. Angel is a likable character, the grandmother/older neighbor/sage friend that we would want to go to when we need counsel or just to 'spill' to someone who cares. And although Angel is a 'professional somebody' who is always looking for opportunities to grow her cake business, she is also caring--listening and helping out where she can with advice and a colorful cake. As her friend Francoise tells her, she is "someone who has ears that want to hear my story and a heart that wants to understand it." Angel seeks to understand the viewpoints and motivations of others, including her own, polishing her glasses when she feels she or someone else needs to view a situation with more clarity. I enjoyed getting to know the people and cultures that weave together to make up Angel's world. With some of the stories I would have liked to have gone a bit deeper--wanting to know more and spend more time with those characters. But, overall Baking Cakes in Kiagali gave me what I most enjoy in a book--interesting reading that immerses me in a different world for a while. 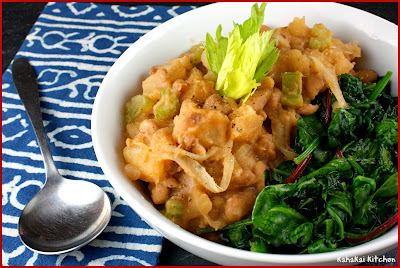 I was tempted to make cake for my dish inspired by the book but my oven is on it's last legs right now and I have not found the time to get it fixed or more likely replaced. Also, I have been trying to cut added sugar and fats from my diet lately and didn't need a tempting cake. I wanted to explore African cuisine and I actually happened upon my dish by kismet. Wandering through my local farmers market a couple of weeks ago I picked up a root-looking veggie and the vendor offered up that it was cassava (aka yucca, manioc, mandioca, tapioca-root, manioc root etc.), telling me that it is the third largest source of food carbohydrates in the tropics, after rice and maize. A new ingredient to me, I remembered it being consumed several times in the book and bought a couple of the (green-less) roots.

Cassava turns out to be a well-used ingredient in African countries. Both the greens and the root are used in a variety of dishes in Rwanda--the greens are what is most mentioned in the book. It turns out cassava grows well in marginal soil and is very drought tolerant, making it a good crop for areas without plentiful water. Cassava is a great source of carbohydrates but a poor protein source, so I zeroed in on a recipe that mixed it with beans to give it a little more of a boost as a veg-friendly meal. 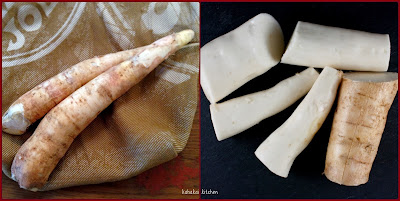 The cassava root as I bought it and peeled ready to chop. Raw, it has the texture similar to parsnips and it reminds me a bit of cooking with fresh hearts of palm--rather than peeling the outside skin with a peeler, you cut off the ends, slice through the skin and remove it by hand. Easy peasy. ;-) 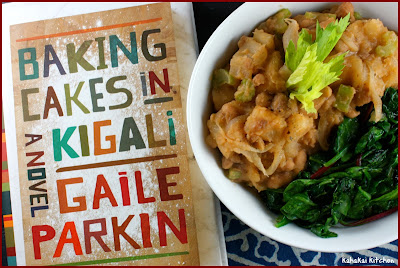 The website called this dish "a traditional Rwandan recipe for a classic vegetarian accompaniment of beans mashed with cassava flavoured with onion and celery" and recommended serving it with green veggies and a sauce like Kachumbari which is apparently like a salsa/cold salad dish of tomatoes, onion and chili peppers. I decided to serve mine more as a stew with steamed greens (kale, spinach and chard) alongside. I wanted to punch up the flavor of the stew and on some sites I read that although Rwandan food is not particularly spicy, sometimes curry or the African berbere spice mixture is used. I found a Marcus Samuelson recipe for berbere at Epicurious and did a variation of his recipe--heavy on the (smoked) paprika, using a pinch of cayenne in place of the Serrano chilies and adding a touch of cumin (because I love it so). The result while not-so-traditional, was very tasty and satisfying.