"You see us as you want to see us... In the simplest terms, in the most convenient definitions. But what we found out is that each one of us is a brain, and an athlete, and a basket case, a princess and a criminal..." 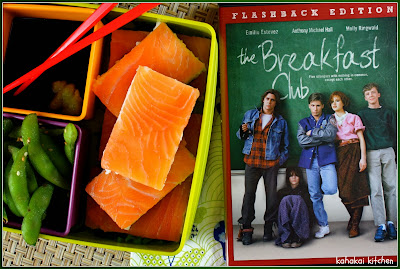 Ah, The Breakfast Club, one of the quintessential 80's movies and our January pick for Food 'N Flix, hosted this month by the wonderful Debra of Eliot's Eats. Sixteen Candles remains my very favorite 80's and John Hughes movie--who can resist Jake Ryan (and Long Duk Dong)? But, The Breakfast Club is definitely in my Top 10. It's not fine cinematic art but it is smart, funny, touching, and the teenage angst and feelings of never quite fitting into the world are relatable, even almost 30 years after it was made. I have to assume that you at least know the basic plot if you haven't seen it. (If not, go here.) The cast is the usual suspects--Molly Ringwald, Anthony Michael Hall, Judd Nelson, Ally Sheedy and Emilio Estevez and it even has the memorable movie song--"Don't You Forget About Me" by Simple Minds--that you can't help singing along to. It's one of those movies that despite owning a copy, I stop and watch it on television if I find it when flipping the channels. 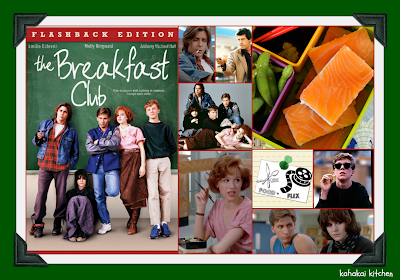 What it isn't particularly is a foodie movie--except for the name and the lunch scenes but that's OK. I loved pulling it out, watching it from beginning to end again, and making a dish inspired by it. I took my inspiration from Claire's (Molly Ringwald) princess-worthy sushi lunch and the interaction between her and John Bender (Judd Nelson) about it--one of my favorite scenes that always makes me laugh. 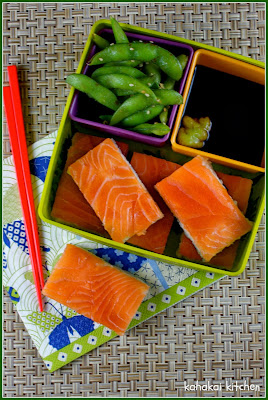 I personally did not try my first sushi until after college and my second round wasn't until several years later--it took me a while to get over the whole 'raw' thing back then. Living in Seattle, traveling to Japan for work, living in Hawaii and having access to great sushi in all of those places has made it a favorite lunch or dinner for me. I don't like to make it though--too much fuss and rolling, so I have had this Donna Hay recipe for Smoked Salmon Sushi tagged to make for a while.

Everything is layered in a baking pan, then turned out and sliced into pieces. It couldn't be easier and since it's made with smoked salmon, it's a good introduction for the sushi-neophyte to the flavors and concept without having to totally go there. ;-) Served with simple edamame tossed with a smidge of sesame oil, sea salt and sesame seeds and some low-sodium soy sauce with a dollop of extra wasabi paste, it makes for a tasty lunch that makes  a long day of work (or detention) a bit more bearable. 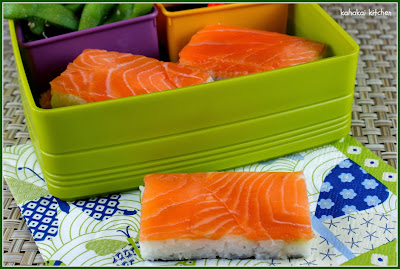 I made a few small changes to the recipe (in red below), cutting the sugar and salt in the sushi rice by half. With the flavorful smoked salmon on top and adding a little extra wasabi to the squares--not to mention the (low sodium) soy sauce to dip them in, it really doesn't need the extra in my opinion. And no one likes 'salt bloat!' Donna has these cut in 30 squares which I think would be great for appetizers but I used my small brownie pan and cut it into 16 rectangles as I thought it would fit the bento box better. They hold together beautifully and work well as a hand-held dipper so the larger size is still easy to eat.

Smoked Salmon Sushi Squares
Adapted from DonnaHay.com
(Makes 30) (I cut mine into 16)

Place the rice in a colander and rinse under cold running water for 5 minutes. Transfer to a small saucepan and add the water. Cover, bring to the boil and cook for 10 minutes. Remove from the heat, cover, and stand for 10 minutes.

Combine the vinegar, sugar and salt. Spread the cooked rice over the base of a large flat shallow non-metallic dish and sprinkle with the vinegar mixture. Stir with a spatula for 5 minutes or until cool to touch. 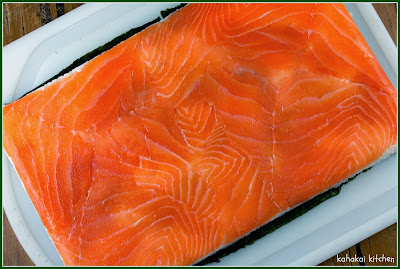 Before cutting--this is also before I trimmed the edges where my nori sheet went over.

Line a 8-inch x 12-inch (20cm x 30cm) cake pan  with plastic wrap. Line the base with smoked salmon, spread with wasabi, top with rice and press down firmly. Place nori over the sushi rice and fold over the plastic wrap to enclose. Place a piece of cardboard over the top and weigh down. Refrigerate for 1 hour. Turn out, slice and serve with soy sauce

Notes/Results: Super simple to make and fun to eat--these are great little squares. I actually put mine together the night before and unmolded and sliced them in the morning and they were perfect. Very portable and not at all messy--so in addition to a lunch box they would be great for parties or picnics too. I will definitely make them again. 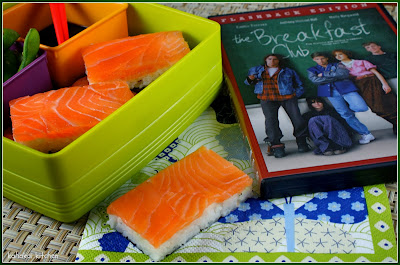 It's Potluck week at I Heart Cooking Clubs (we can make any Donna Hay dish or a dish from any of the previous IHCC chefs) so I am also linking these sushi squares up there too. 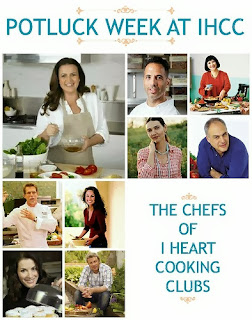 The entry date for this month's Food 'N Flix is Monday, January 27th. If you missed this round and like food, films and foodie films, join us for February when we will be watching the classic foreign foodie movie, Babette's Feast hosted by Culinary Adventures with Camilla.