It's the 3rd anniversary of Souper Sundays this week. That's over 150 soups I have made and over 150 weekly round-ups featuring the soups, salads and sandwiches of blogging friends old and new. To celebrate, I have a bean and veggie packed brew flavored with tarragon and thyme, this White-Bean-Tarragon Soup from "The 30-Minute Vegan: Over 175 Quick, Delicious, and Healthy Recipes for Everyday Cooking" by Mark Reinfeld with Jennifer Murray. 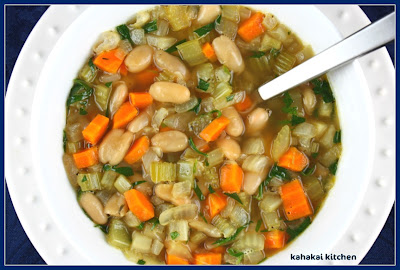 Mark Reinfeld says, "White beans and tarragon is a classic food combination--for good reason! Tarragon, an aromatic herb with a licorice-like flavor, is often used in French cuisine. An interesting tarragon tidbit is that the word comes from the French word for "little dragon" due to it's root structure. This recipe can serve as a template for many a bean and herb soup. Serve with whole grain bread." 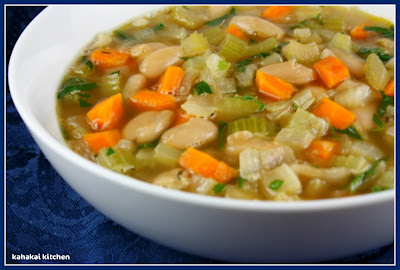 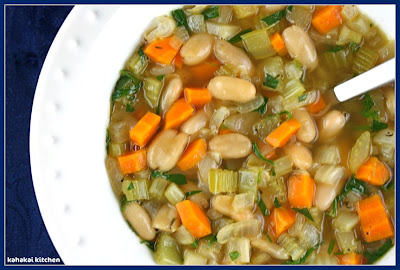 Notes/Results: This is a quick soup that has a surprising amount of flavor for cooking such a short time. The creamy beans (I used cannellini instead of navy because I had them on hand) partner well with the slightly firm veggies and the slightly sharp herbal notes from the tarragon, thyme and fennel. The beans make it satisfying but not heavy and all of the chopped veggies make it a pretty bowl. A very tasty and healthy vegan soup that I would make again. 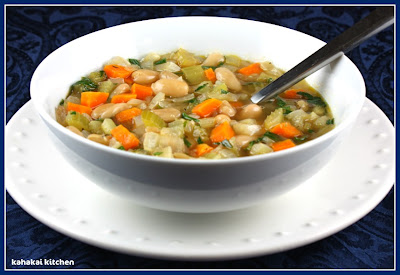 The Year in Soup: My Dozen Favorite Soups From Year 3
of Souper (Soup, Salad & Sammie) Sundays
Souper Sundays began three years ago both because of my love of soup. I started inviting others to submit their soups to a weekly round up and then salads and sandwiches were added a few months later because some of you don't soup all year round, in all kinds of weather like I do. ;-) With over 50 soups since last year's "The Year in Soups" round up, it was hard to pick my favorites among all the different soups I made. I ended up with an even dozen; some vegetarian, some with meat, a couple of cold soups and soups with lots and lots of beans. These 12 are the soups I craved and thought of long after they were eaten.
I loves me some Portuguese Bean Soup--it's a Hawaii staple, served everywhere; at home, restaurants, farmers markets, fairs and festivals. Island chef Sam Choy's "Da Wife's Bean Soup" is a great example--hearty and chock full of beans and pasta and with a rich ham hock stock and slightly spicy Portuguese sausage. 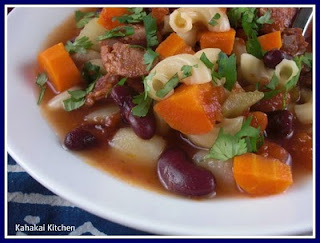 French Onion Soup's younger, blonder, thinner cousin this German Onion Soup (Ueberbackene Zwiebelsuppe) made with white wine, chicken or veggie stock and gruyère or gouda. Although I enjoy French onion soup I sometimes find it to be too heavy, this German version was indulgent but still light. 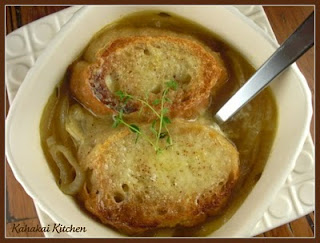 Ina Garten's Rich Beef Barley Soup from How Easy Is That? lives up to is name--the oxtail makes it so rich and full of flavor. So full of hearty barley and veggies, it is a satisfying, warm-you-up-from-the-insides, kind of soup. 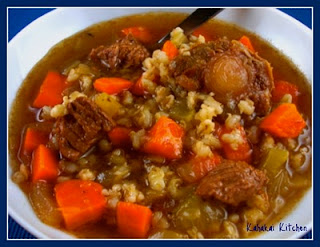 This Kabocha Squash Soup with Toasted Cumin and Chile makes the most of one of my favorite squash. It's creamy and the ingredients like cumin, lime, and chiles brighten it up and cut some of the richness from the creamy coconut milk. 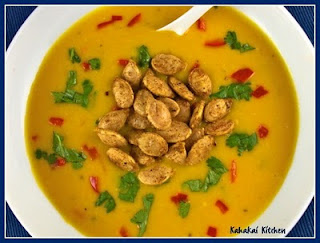 David Rocco's Chickpea Soup is all about simplicity and ease--it goes together in about 20 minutes but has so much flavor. It was a toss up between this one and Jamie Oliver's Chickpea, Leek and Parmesan Soup--both are delicious bowls of chickpea goodness. 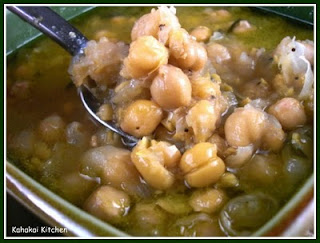 My chef-crush Ming Tsai makes excellent Asian comfort food and his Ming's Mom's Noodle Soup with Five Spice Beef Shank was like a big warm hug from mom. It's packed full of noodles in a gingery broth topped with a slightly spicy beef shank--delicious. 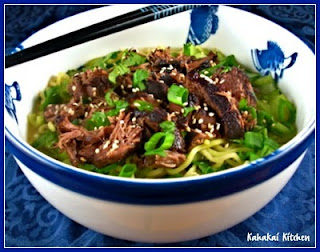 My favorite bean soup creation was this Beans, Bacon & Boursin Soup that I tossed together for a warming meal after a long day. For a thrown-together-relatively-quickly soup, this one was pretty perfect. Lots of good flavor from the bacon, fresh herbs and white wine. It is delicious on it's own but then there is another layer of creaminess and added flavor from the tablespoon of Boursin on top. 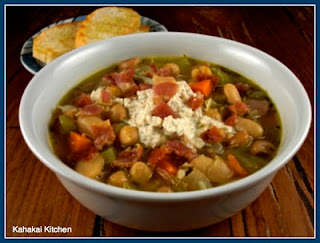 I am a big fan of the Moosewood series of cookbooks and this Hungarian Mushroom Soup is one good reason why. I have made other versions of this soup but this vegetarian version is a good one with silky smooth broth and earthy slightly chewy mushrooms, and smoky paprika. A hearty soup that meat lovers would also love. 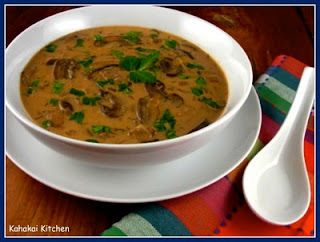 The sculptural elements of this Tortilla Soup, (you pour the warm broth over a bowl of chicken, guacamole and tortilla strips), is why I tried it, but luckily the flavor was excellent too. A nice level of spice and a fun way to make a little party out of your soup bowl. 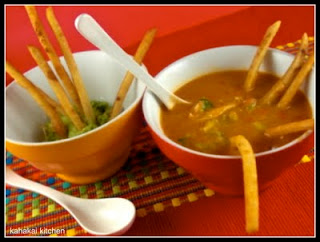 Quite a few cold soups graced the kitchen this year but this Cold Cherry-Lemon Soup from "Love Soup" by Anna Thomas was the most unique and the most beautiful with it's deep red color. A tasty combination of sweet and tart and perfectly refreshing in the warm weather. 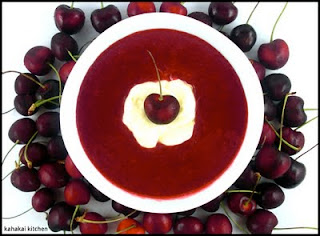 Another unique chilled soup was this Cucumber-Lychee Gazpacho with Feta Crostini from Aarti Party on the Food Network. The cucumber, lychee, yogurt, and mint blend together well for a soup that will have you guessing what's in it, and the toasted baguette slices with feta are the perfect compliment. 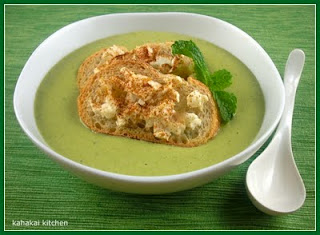 An unusual combination of ingredients come together into one terrific soup from Tessa Kiros. This Portuguese Purslane Soup posted a couple of weeks ago was so thick and delicious and had so many layers of delicious flavor, I was sad when I finished it all up. If you find purslane in your neck of the woods, this is the dish to make. 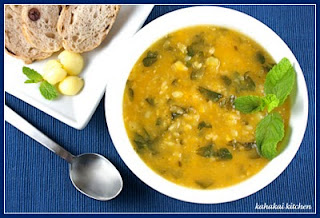 I had to stop myself at a dozen favorites but I could have picked at least a dozen more. So many wonderful soups have come from the kitchen this past year it is making me hungry just looking at all of them. Soup is good food!

And now let's look at a few great soups and even a sandwich in the Souper Sunday kitchen this week:

Janet from The Taste Space has a hearty and colorful Spanish Chickpea and Squash Stew with Pears (Olla Gitana). She says, "This soup is probably the epitome of my current cooking adventures. A Mediterranean chickpea soup heaping with vegetables including butternut squash, green beans, carrots and silky tomatoes in a saffron- and paprika-spiced broth. And pears, oh pears, which is what my piqued my interest to make a second version of Spanish bean soup. ... The pears add a lovely sweetness and the saffron and sweet paprika meld wonderfully with the stew. The vinegar and mint added at the end are a perfect conclusion to a sweet and savoury soup." 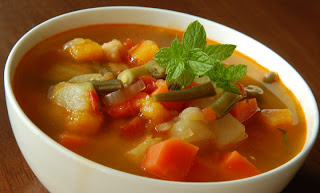 Tigerfish from Teczcape - An Escape to Food says, "This Four-Beans Pork Bone Broth Soup uses black-eyed beans, northern beans, peruano beans and soy beans (all the dried beans were soaked overnight, then rinsed before using). Also added were ginger and onions, some coarsely ground black pepper for taste. ... Down but not out, I did not want to succumb to instant calcium, collagen, gelatin commercial powders and capsules, so a homemade bone broth is able to provide a much more nutritious range of gelatin, minerals and amino acids." 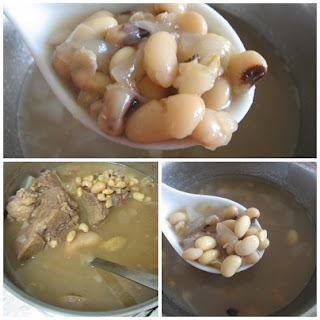 Shaheen from Allotment 2 Food has a Chilli Spiked Roasted Pumpkin Soup to share and says, "This is one of the most ridiculously easiest of soup recipes I have in my reportoire. I usually make it with butternut squash, but I picked up a small culinary pumpkin a few days ago and tried it with that. If you do decide to make this, make sure you have good ingredients, you don't want to make this soup with a tasteless pumpkin because all you will end up with is a insipid watery soup." 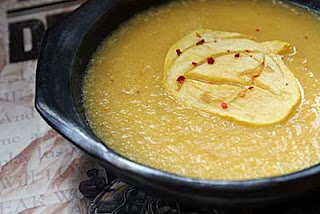 Heather of girlichef doesn't know quite what to call her Red Chile Beef Soup with Vegetables She says, "Caldo de Res and Mole de Olla are not necessarily the same thing. But since dishes vary from region to region, sometimes they can overlap. The recipe that I based this Caldo de Res on was actually labeled Mole de Olla. But mi esposo and local Mexican friends tell me NO! It's not Mole de Olla, it's Caldo de Res. Confused much? ... After a few hours of hair pulling and trying to figure out here from there, I just gave in and decided it could be either-or. I really do think it boils down to who is making it." I would just call it delicious! ;-) 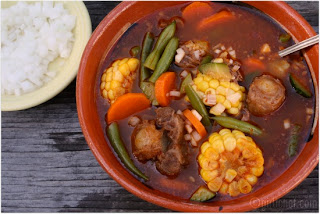 A tasty Asian Herbs Sandwich from Graziana from Erbe in Cucina. She says, "Last month I sowed komatsuna, semposai and mizuna and this is the first small harvest, with some sorrel leaves too. I used this bunch of fresh herbs to stuff a baguette, using also my new oriental herbs mixture with ginger, curry plant, lemon grass, anise, cumin and many other spices." 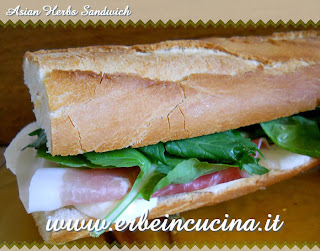 Thanks to everyone who shared a dish this week. Also thank you to those of you who have contributed to the Souper Sundays round ups over the past three years or visited and commented--you help keep it fun. ;-) If you have a soup, salad, or sandwich that you would like to share, just click on the Souper Sundays side bar for all of the details.
Souper Sundays is posting a little early this week as I am in Portland celebrating my Mom's 80th Birthday today, so if you are ducking in at the last minute--I'll have to add you tonight. 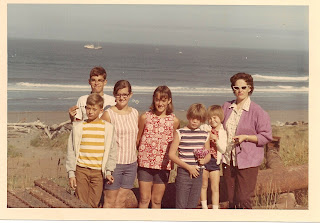 At the Oregon Coast just a "few" years ago. I am the one being held like a sack of potatoes by my mom in the cool sunglasses. ;-)
Happy Birthday Mom!
Have a happy, healthy week!