Recipes catch my eye for certain reasons, it might be the mouthwatering photos, the list of tasty ingredients, or it could be the introduction/write up that comes with the recipe. In this case it was the name, Djaja Tarat or The Chicken That Flew. I liked the idea of the chicken "flying off" and leaving a still hearty vegan Moroccan dish. This spin on Djaja Tarat comes from a book I checked out of the library, "The Ethnic Vegetarian: Traditional and Modern Recipes from Africa, America, and the Caribbean" by Angela Shelf Medearis. (I know I vowed to stop buying cookbooks but I may need to add this one to my shelves as it is full of interesting and delicious-sounding recipes.) ;-) 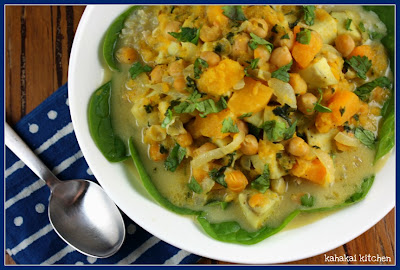 I made some changes--based on my own taste and necessity due to an unfortunate sweet potato incident. I bought what I thought were going to be lovely orangish sweet potatoes from the market and ended up with white ones--drier and not as sweet. Bummer. I think I need a Sweet Potato Shopping 101 class. Wanting more color and sweetness, I happened to have a big package of butternut squash and so I added a couple of cups. Another color (and flavor) enhancement was to add 2 teaspoons of my favorite curry powder blend. Finally, I wanted a more stew-like dish with lots of sauce so I increased the amount of non-dairy milk, using 2 cups of the carton of unsweetened coconut milk in my fridge and cooked the whole mixture for about 25 minutes to get it to the right consistency. The original recipe is below and my changes are in red. 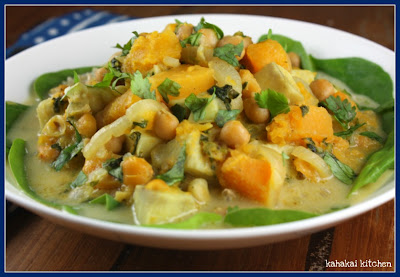 Angela Shelf Medearis says, "I don't know how this Moroccan dish got its name. I would imagine that it normally includes chicken, an ingredient that would be excluded during some religious holidays. It still has enough protein to be a main-course dish, even without the chicken in the pot."


Heat the oil in a large saucepan over medium-high heat. Add the onions. Sauté for 7 to 10 minutes, or until soft and golden. Add the chickpeas, sweet potatoes, butternut squash, cilantro, salt, pepper, saffron, curry powder and milk alternative. Reduce the heat to low, cover and simmer for about 25 minutes or until sweet potato and squash are cooked to your liking. To serve: Place a layer of baby spinach in a bowl, top with warm brown rice, and spoon stew over the top of both. Garnish with chopped cilantro and serve. 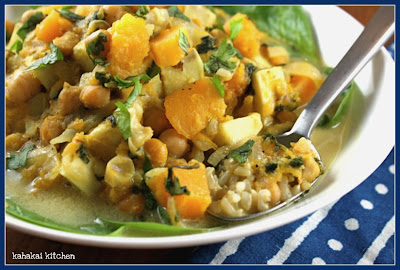 Notes/Results: Served over a layer of baby spinach topped with brown rice, this stew was satisfying, healthy and full of flavor. The butternut squash was perfect in the dish--in fact I kind of ate around the sweet potatoes to get to the chickpeas and squash, so next time I might make it with all squash. You could also add the spinach to the dish for the last few minutes of cooking, but I like layering it on the bottom of the bowl and letting the heat from the rice and stew wilt it. With all the flavor from the curry and saffron and the richness of the coconut milk, you won't miss the meat in this dish. This ended up so tasty that I think my chicken not only flew--it danced around a bit before going on its merry way. ;-) 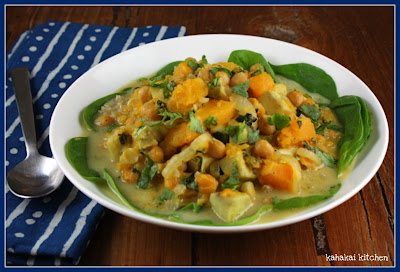 Let's check out the Souper Sunday kitchen and see who stopped by.
Janet from The Taste Space has an easy 15-Minute White Bean and Kale Soup to share. She says, "White beans, kale and a host of flavours (garlic, lemon, celery seed, dill) are combined for delicious results. While you usually have to simmer a soup for complex flavours, here you only have to blend and heat. Almost an instant soup. With a dirty blender and a pot. ... I adapted it from Radiance 4 Life, by increasing the kale and using lemon pepper for extra zing. Funnily enough, I hate celery but don’t mind celery seeds and thought they helped create many levels of flavor." Also showcasing leafy green kale is Lori of Fake Food Free with her Smoky Potato Soup with Kale. She says, "Kale chips are the new cracker. Since discovering kale chips last year, thanks to all my favorite food blogs, I can’t get enough of them. Every time I pull a pan out of the oven I still look at them, amazed that a leafy green can turn so crisp and tasty. When I decided to make some potato soup tonight I wanted to add a little something extra so I decided on a little kale in the soup itself. Then one thing led to another and I was topping my bowl with kale chips before dinner. Now I’m officially proclaiming kale chips as my new cracker for all my fall soups!" 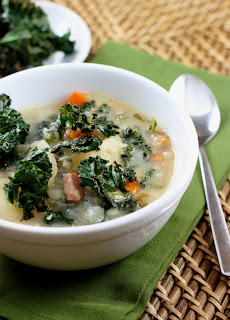 girlichef made her version of an Italian classic and says, "Let's talk Wedding Soup, which is basically the translation of Minestra Maritata. A tradition in Southern Italy that, like many traditional dishes, is argued to have its origin in several places from Naples to Rome. Most of you probably already know that the "maritata" actually refers to the marriage of ingredients that go into the pot to form this soup. The perfect marriage of flavors, if you will. It doesn't actually stem from the fact that it is/was served at weddings. Although, many ideas get lost in translation. And I think many people do serve this at wedding or other special events nowadays." 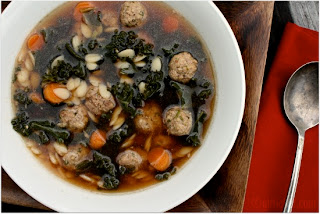 Joanne of Eats Well With Others obviously had no problem finding the right sweet potatoes and made this Nutty Sweet Potato Soup with Harissa and Spinach to make up for a naughty "McDreamy" Dream she had. She says, "I was shocked and appalled. And needed something seriously wholesome to make up for all of the lascivious tendencies that apparently lie beneath any sense of decency I might have thought I had. Enter this soup. Given that it is filled with all that is good in this world (i.e. sweet potatoes and peanut butter and a hint of spice), it's pretty ideal for righting any and all wrongs you may or may not have committed while you slept." 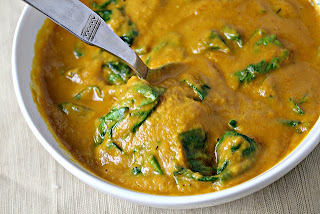 Shaheen of Allotment 2 Kitchen is back with creamy Celery and Tarragon Soup and says, "Celery is often used as a mirepoix to many soups. For this reason, I think it often gets overlooked and overpowered by other ingredients, but not here. Today I have given celery a leading role in this soup. But before you think I am always this thoughtful towards the slinky sleek celery. I have to be honest with you and say that this is not always the case, as you will often find it lurking at the bottom of my fridge, getting all soft and limp, but like I said not today." 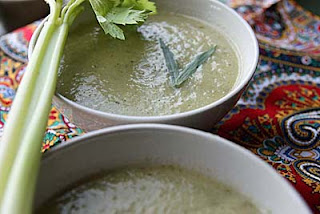 Tigerfish from Teczcape-An Escape to Food has it all wrapped up in this pretty Egg-Wrapped Quinoa Salad and says, "What I like about quinoa salad is that I can have it slightly warm or cold - as I like it. This is my twist on Japanese (Fusion cuisine) Omu-raisu (or Omelette Rice， 蛋包饭)- an omelette filled with fried rice and usually topped with ketchup. I made Omelette Quinoa Salad - an omelette (or more accurately, a thin egg crepe) filled with warm quinoa salad." 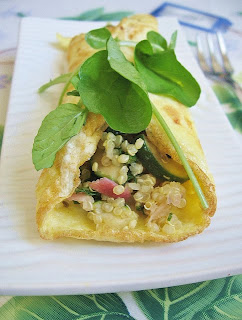 Some wonderful recipes again this week. Thanks to everyone who joined in. If you have a soup, salad or sandwich that you would like to share, just click on the Souper Sundays logo on the sidebar for all of the details.
Have a happy, healthy week!