There are few things better than a nice, glossy new cookbook full of delectable looking recipes. Reviewing that book and cooking along with a great group of fellow bloggers makes it even more fun. I am lucky enough to be participating in a Cookbook Spotlight and Cook-Off with about twenty other bloggers and the host, my good friend Heather of girlichef. The book we are reviewing is The Homesick Texan Cookbook, written by Lisa Fain, author of the popular Homesick Texan blog. Fain is a seventh-generation Texan, transplanted to New York. Missing the Tex-Mex dishes of her home state, she created her blog to enjoy and celebrate the familiar tastes of home she was craving. As a group,we will be cooking through the book during the month of September. The first two weeks we are all cooking recipes selected by girlichef, the third week we will pick our own dishes to try, and the final week we will be reviewing the book with our thoughts and feedback. 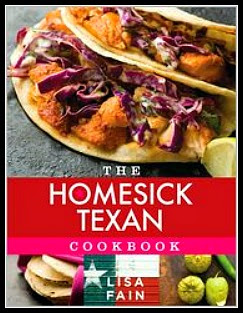 Our first two recipes were Pork Tacos, Dallas Gas Station Style and Austin Style Black Beans. Here's the point that I could pretend I made pork tacos and you would likely be none the wiser... BUT ...I didn't. Since I have been drastically reducing the amount of meat I am consuming, I am in the habit of not buying meat. Rather than go out and purchase some pork, or not make the recipe and just make the beans, I instead decided to improvise and make a vegan version. Yep, I went there! (Just a note--I am not anti-meat, just pro-meat alternatives right now. If a big taco truck drove up and had pork tacos on the menu, I might order one, and if I was at a favorite watering hole nursing a beer, I might order their 3-taco sampler of kalua pork, shrimp and fish tacos. But here at home, I went with the most meat-like alternative I know of but seldom cook with... seitan.) 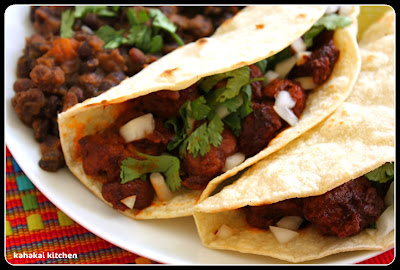 Basically seitan is wheat gluten that has a very similar look and feel to meat when cooked and the ability to take on the flavors of the ingredients it is cooked with, thus making it perfect for Fain's pasilla and chipotle spiked marinade. I like to think that my vegan version of the recipe, made with all of the same ingredients and process, could have come from a Dallas gas station too--just the biodiesel station down the street that is pumping the fuel for the tour buses of "green" musicians like Maroon 5, Dave Matthews Band, Sheryl Crow, Willie Nelson, and Jack Johnson! ;-)

In a dry skillet heated on high, toast the pasilla chiles on each side for about 10 seconds or just until they start to puff. Fill the skillet with enough water to cover chiles. Leave the heat on until the water begins to boil and then turn off the heat and let the chiles soak until soft, about 30 minutes.

While the pasilla cholies are soaking, rinse the pork and trim the fat. Cut into half-inch-sized pieces.

Once the pasilla chiles are hydrated, drain and rinse them. Place the chiles in a blender along with the chipotle chile, garlic, oregano, cumin, cloves, orange juice, pineapple juice, vinegar, and olive oil. Blend until a smooth purée forms. Taste and add salt.

Toss the diced pork with the chile purée, place in a non-reactive container, and store covered in the refrigerator for 8 hours.

Before cooking, let the pork sit at room temperature for 30 minutes. To cook the pork, heat the vegetable oil in a large skillet on medium. Fry the pork in the skillet for 15 minutes, stirring occasionally.

While pork is cooking, place the jalapeños under the broiler and cook for 10 minutes, or until blackened, turning once. Serve pork in warm tortillas, topped with cilantro and onions, along with the roasted jalapeños, lime wedges, and salsa on the side.

Notes/Results: Mmm... These tacos have that wonderful--sweet, spicy and savory combination and lots of layers of flavor. They are hearty and filling and I really didn't miss the pork. I just marinated the seitan as the recipe stated and cooked it about 10 minutes in a hot pan, just to warm the seitan through and it turned out tender and meaty. A make again recipe for me as I want to feed some to some meat-eating friends and see if they notice.

The beans are vegetarian already but Fain describes them as having "a rich smoky flavor that comes from chipotles instead of the usual ham hocks or bacon." I do have to apologize for the look of my poor little beans. I ended up cooking them and then couldn't take a picture when they were their most shiny and glossy. I ended up having to leave for a couple of hours, then a couple of hours turned into more hours and I was too tired to make the tacos and take pictures when I got home last night. So the beans did an overnight stint in the fridge. Fine for the taste but not so much for their appearance--but they were delicious. 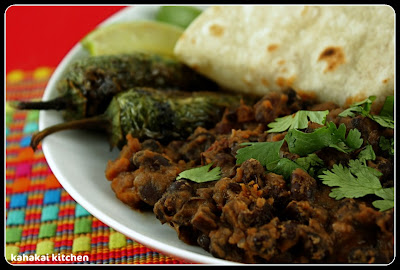 Rinse and sort through beans, removing any stones or shriveled beans.

Place beans in a large pot and cover with 1 inch of water. Bring to a boil and then cook for 15 minutes.

Drain and rinse the beans in a colander in the sink.

Return the empty pot to the stove and on medium-low heat, warm the vegetable oil. Add onions and carrots to pot and while occasionally stirring, cook until onions are translucent and the carrots are lighter, about 8 minutes. Add garlic to the pot and cook for 30 more seconds.

Return the beans to the pot along with the chipotle-chiles and 1/4 cup of the cilantro. Cover with 2 inches of water, bring to a boil, and then turn the heat down to low and simmer uncovered for 1 1/2 hours.

After 1 1/2 hours, add the remaining cilantro, cumin, tomato paste, and lime juice. Taste and add salt. Cook uncovered for 30 more minutes, or until beans are tender (the ultimate cooking time will depend on the freshness of your beans). When done, smash a few beans against the side of the pot with a spoon to thicken the broth. Stir and serve. 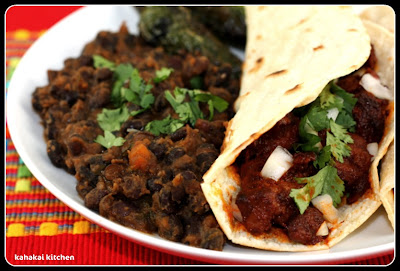 Notes/Results: Excellent black beans and I have always thought my own were good.;-) Fain's version has a lot of flavor and just the right level of spice and smokiness. I did end up cooking them an extra 20 minutes or so--I like my black beans soft. They were perfect with the tacos for a filling meal. I used some of the leftovers in some quesadillas--also tasty. I would make these again. 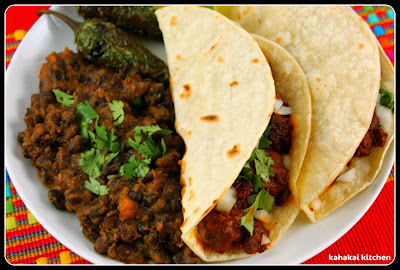 Two for two on these recipe picks--both were delicious. Can't wait to make next week's Poblao Macaroni and Cheese. (I'll be going full dairy and full fat on that one!)