Quick and Easy Guava-Yuzu-Vanilla Jam: We Be Jammin' Local Style 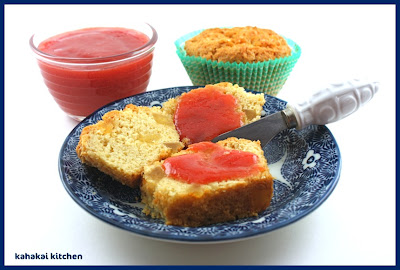 I am easily seduced by fruit. Show me a big juicy pineapple, a basket of berries, or a pile of plums, and I am getting my wallet out and buying as much as I can. Make it a big seductive display of locally-grown tropical fruit and I start drooling. 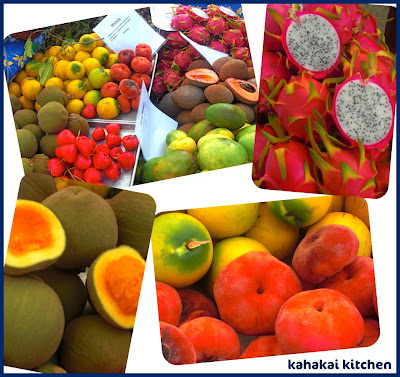 I had a chance to check out opening day of the new Ala Moana Farmers Market on Saturday and I was immediately taken with the piles of fresh. local tropical fruit available. I bought a few pieces of things I don't get to enjoy often, then zeroed in on a box of cut guava--so pretty in pink. Of course, once I starting munching, I remembered that as much as I enjoy the flavor of guava, I have some issues with the mushy texture. (Yep, those texture issues of mine raising their ugly heads again!) Not wanting my $5 /1 lb-ish box to go to waste, I decided to make something out of it that would disguise the texture but still allow me to enjoy the flavor.
It's "Condiments!" week at I Heart Cooking Clubs. I was enamoured with the Fresh Strawberry-Vanilla Jam that my pal Kim from Stirring the Pot made last week for the Back to School theme and thought the vanilla would compliment the guava nicely. Kim adapted Jamie's recipe, brightening it up with some lemon juice, and liking the idea I thought I would use the zest and juice of some of the little yuzus that I bought from the same fruit vendor for my jam. 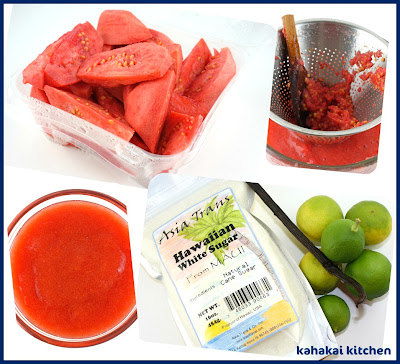 Thus we have Guava-Yuzu-Vanilla Jam. Since September is "Eat Local Month" here on the islands and I am gearing up for another week of eating strictly locally grown and produced foods at the end of the month, I thought it would be fun to use all local ingredients for the jam. In addition to the guava and yuzu, I added sugar from Maui and a vanilla bean from The Big Island.
One "pesky" thing about guava are the many hard seeds contained within. I was doing my best to slice and clean the guava when it decided "this bites!" and just threw the guava into the pot with the yuzu juice and zest, and half of the sugar and cooked it down for the 4 minutes in Jamie's recipe. Then I let it cool just a bit and put it through a metal sieve, mashing it down to get the pulp separated. I ended up with about 1 1/2 cups of jam at that point, which I put back into the pot with the rest of the sugar and the salt and cooked it down another 10 minutes--mainly to make sure it would be thick enough. It worked and the warm jam was enjoyed on top of one of the Baker Dude's Passion Fruit Pineapple Scones (another farmers market purchase!) 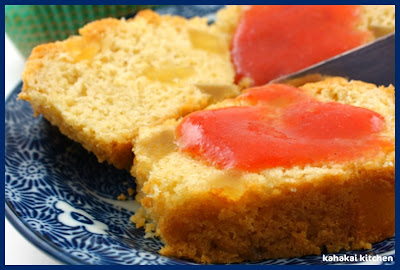 I am including Jamie Oliver's recipe from the Food Network below with Kim's addition of lemon juice. In case you can't get your hands on fresh guava and yuzu, this recipe should work with most any "jam-able" fruit and citrus fruit combo.
Strawberry Guava-Yuzu-Vanilla Jam
Adapted from Jamie Oliver & Stirring the Pot
(Makes About 2 Jars)

Run your knife down the vanilla pod scrape out the seeds and add with the pod to the strawberries and the sugar. Mush it up a bit with a whisk leaving some large chunks. Put on a medium heat to bring to a gentle simmer and leave to cook for about 4 minutes. Using a ladle remove the scum from the top and leave to cool. Place in sterilized jars and store in the refrigerator. 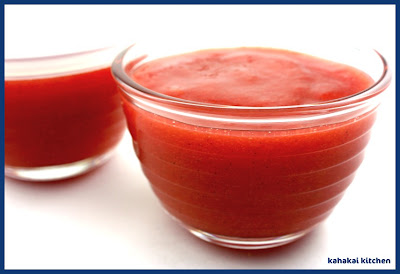 Notes/Results: It's mighty pink, it's sweet, tastes great, and no texture issues! I really liked the way that the jam turned out. I made a half batch and reduced the sugar down to about 1/2 cup. (That's reduced about 1 1/2 ounces from the recipe because the guava is plenty sweet.) It was excellent on the scone and some jam will hopefully end up on pancakes this weekend. I had enough jam to fill two 4 oz lidded jars, so one will be gifted to a friend. Easy and good, I would make this recipe again. Thanks for the inspiration Kim! ;-) 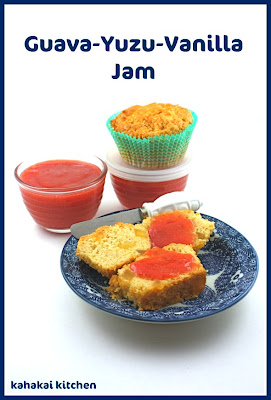 You can check out what condiments the other IHCC peeps made this week by going to the post here and following the links.

I am also sending this jam to the Friday Potluck over at EKat's Kitchen. It's been a while since I have joined in and Erin is celebrating the potluck's one-year "linkyversary." Congrats Erin! 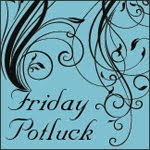