Summer is winding down and fall is just around the corner. Not that it means a lot in a year-round temperate climate. (I know, I know, ...poor me!) Probably the thing I miss most about living in the Pacific-Northwest are the crisp fall days and the colors of the turning leaves of early fall (the sunny days before the endless rain). Still, even though the weather doesn't change much here, signs of autumn are about. I still like to "pet" the soft, fuzzy sweaters that appear in the stores, I get cravings for hot apple cider, I want to make and eat more casseroles and slow cooker fare, and I have the urge to buy shiny new school supplies. Speaking of school supplies, our theme this week for I Heart Cooking Clubs is "Back to School" and I picked Jamie's Butternut Squash Muffins to make. Butternut squash says fall to me, and of course muffins are always a great treat for breakfast on-the-go or lunch bags and boxes. 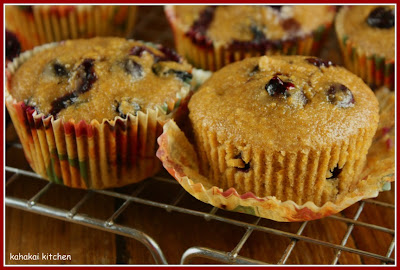 I wasn't sure about "whizzing" the raw butternut squash in the food processor, especially with leaving the peel on, but it works. With the cinnamon these are similar to a carrot cake, although a bit smoother. Jamie bakes them with raisins on the top, but I think they would much rather be mixed with plump fresh blueberries (and plenty of them!) rather than boring old dried raisins. Between the blueberries and the butternut squash, these muffins are full of rich antioxidants and ready to battle all those free-radicals and build up your immunity ;-) 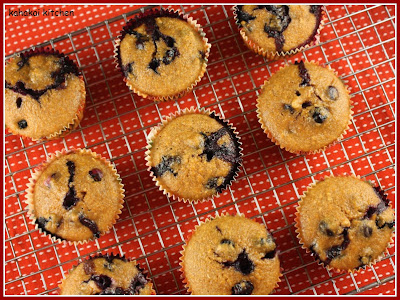 Although Jamie has a version of these on his website, topped with frosting, I used this recipe from Parenting.com.

Line a muffin pan with 12 paper cupcake liners. Evenly distribute the mixture into the muffin cups and sprinkle a few raisins (1/4 cup total) over the top of each muffin. I omitted the raisins on top and instead added about 1 1/2 cups of fresh blueberries, lightly coated in flour.

Bake 20 to 25 minutes, until a wooden skewer or knife inserted in the center of a muffin comes out clean (if it's slightly sticky, they'll need a bit longer—bake 5 more minutes, or until cooked through and golden on top). Transfer muffins to a wire rack to cool.

Bake the muffins on the weekend and freeze. 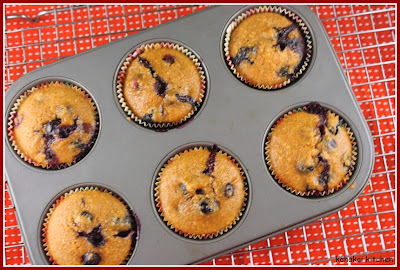 Notes/Results: Extremely moist and really good. As you can see by the picture below, I may have gotten a little carried away with the amount of blueberries I put inside these--oh well! I hate when you get a blueberry muffin with three berries in it so I would rather have extra. I did toss my blueberries with flour so they would not "bleed" but that only seemed to work on about 1/2 of them. I actually think it makes them look prettier to have some of the berries spread out so in the end it worked. Two other small changes--I reduced the brown sugar to 3/4 cup since I was adding the blueberries, and I used white wheat flour for a little extra fiber. These muffins are very quick to make and tasty enough that I will make them again. 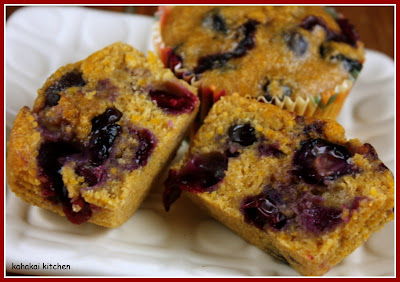 You can see what the other IHCC peeps took "Back to School" with them by going to the post and following the links.