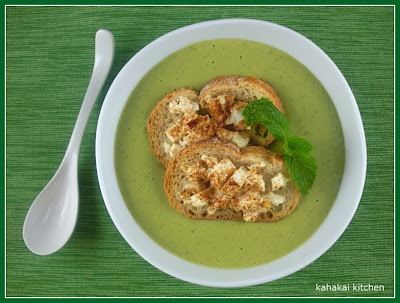 I caught an episode of Aarti Party with Aarti Sequeira, last year's Next Food Network Star a few weeks ago and was intrigued by her Cucumber-Lychee Gazpacho with Feta Crostini. I like all of the ingredients individually but I was not sure how they would mix together. No worries... it makes a unique and cooling soup--the slight sweetness contrasting nicely with the salty-smoky feta crostini.
The recipe is from Food Network, here. 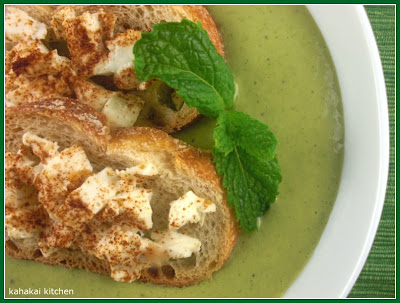 For the crostini: Preheat the oven to 400 degrees F.

Line a baking sheet with parchment paper. Set baguette slices on the baking sheet, and bake until golden, about 5 minutes. Sprinkle with a little feta cheese and paprika, bake another 5 minutes.

For the gazpacho: Add the cucumber, lychees, almonds, mint, cilantro, yogurt, salt and pepper to a blender or a food processor and blend until smooth. Taste for seasoning and adjust as necessary. Chill before serving. Top with warm crostini and serve. 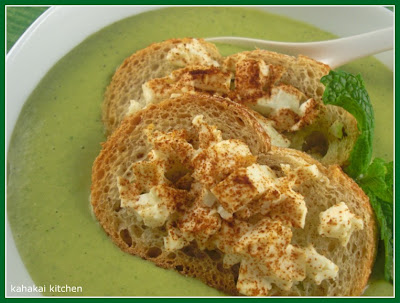 Notes/Results: I was surprised by how good this soup is. You don't get a strong individual taste of any ingredient, it just all works together nicely. I think if I had not made the soup and known the ingredients, I would have had a hard time identifying the flavors but they work together very well. I would have liked to use fresh lychee, but there was none at the market, so a well-rinsed can sufficed. I did use herbs from my garden and a local cucumber. Toss the ingredients for the soup into the blender in the morning, chill it all day, then when you are ready to serve, prep your crostini. A small bowl makes a refreshing and unique starter on a warm evening. I would make this soup again. 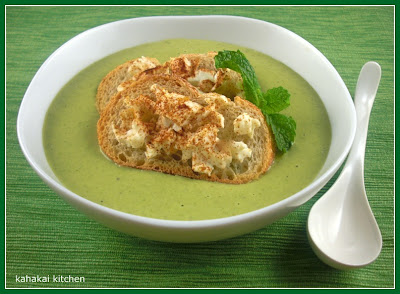 We have a few wonderful dishes and good friends waiting in the Souper Sundays kitchen, so let's go take a look.
Elizabeth from The Law Student's Cookbook has a Coconut Chicken Soup from her newly moved into kitchen and says, "This first untested meal was absolutely delicious. Despite how hot it is outside, the soup was really refreshing, probably because of the coconut. I apologize the picture isn't more appetizing and that I didn't spoon the soup into the bowl without getting it all up the sides. I am not the neatest person in the world. But forget the picture and make the soup." 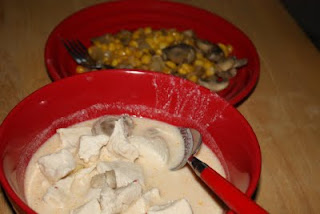 Janet from The Taste Space has a soup and a salad this week. Her soup is this Luscious Lentil and Basil Soup. Janet says, "In an effort to use my bountiful basil crop, without resorting to the typical pesto (yet), I found this delicious lentil soup with veggies and basil in The Natural Vegan Kitchen. ... I seem to have an affinity for lentils and carrots, and this soup did not disappoint even though it was a minor component. I don’t often cook typical Italian, but the hint Italian flavours of basil, oregano and thyme were lovely in this soup beefed up with sweet potato and cabbage. Of course, the full cup of fresh basil is what brings this soup out of the standard Italian fare." 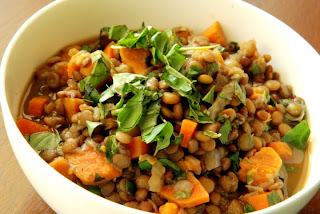 Janet's salad offering is this striking Asparagus Ribbon Salad with Mosto Cotto and Almonds, about which she says, "Ribboning asparagus can be a tedious process, so this is when you actually want to buy the big, fat asparagus (usually I aim for the thinnest stalks possible since they tend to be sweeter). It is easier to grasp the plump spears and lay them flat as you peel away each layer. Highlight your peeling efforts with a remarkably simple, yet sophisticated dressing. You can never go wrong with mosto cotto, an aged condensed balsamic vinegar, and here it is complemented by the sweet earthiness of asparagus and the sweet crunch from the almonds." 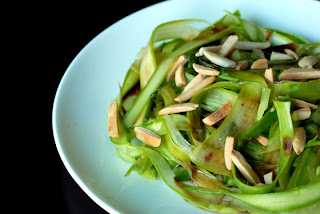 Tigerfish of Teczcape - An Escape to Food made a main course Radish, Raisins, Cauliflower Quinoa Salad and says, "Making salads out of quinoa is a recent discovery for me in terms of utilizing quinoa as the ingredient. Since then, I have been making quinoa salad repeatedly and frequently because it is just so easy to prepare, definitely nutritious and very flavorful. Kept light and easy by incorporating raw and/or lightly cooked (e.g. gently steamed or instantly blanched) ingredients such as raw radish, and blanched/ steamed cauliflower." 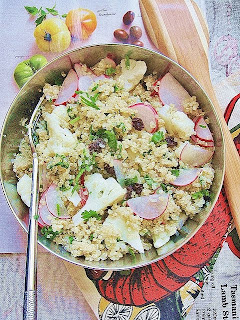 Stash from The Spamwise Chronicles is back with us this week and here with a colorful Summer Vegetable Salad, with Gambas al Ajillo and Quick-Pickled Young Onions. Stash says, "Gambas al ajillo, or “garlic shrimp” in Spanish, is just that — shrimp sautéed in olive oil and garlic. It’s a classic Spanish tapa that’s also a favorite in my kitchen. After all, it’s just shrimp, salt, olive oil and garlic. You could make this a meal all by itself, with some crusty bread on the side to sop up the juices. What I love about this salad is the interplay between the shrimp and the vegetables. It’s truly a symphony that’s more than the sum of its parts." 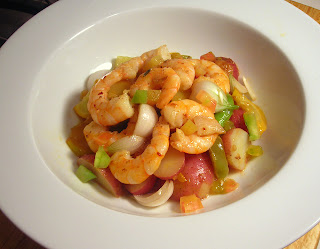 Finally Pam from Sidewalk Shoes has a bit of a combo with this Smoked Turkey Sandwich with Salad Topping. Pam says, "...I prefer the stuff in the sandwich. The more interesting the stuff, the more interesting the sandwich. So, after smoking a turkey breast the other day, I couldn’t deny the fact that some of that turkey would become a sandwich, it would be sacrilegious not to. Knowing that my favorite smoking cookbook, Smoke & Spice - Revised Edition: Cooking With Smoke, the Real Way to Barbecue also had recipes to use up your smoked goodies, I turned to it. I found “Smoked Chicken Sandwich with Summer Confetti”. Smoked chicken/smoked turkey pretty much the same thing in my book. I used the part of the recipe dealing with the salad topping.It was stuff. Stuff for my sandwich. Good stuff. So, even though there were scraps of bread left all over my plate, I managed to eat every last bit of this salad topping." 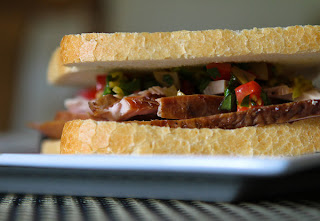 There you have it--some lovely dishes this week! Mahalo to everyone who joined in. If you have a soup, salad, or sandwich that you would like to share, just click on the Souper Sunday logo on the side bar for all of the details.
BTW: Don't forget to enter to win a copy of a Sunset Bridge--a great summer read, and a couple of little Hawaii foodie treats thrown in for good measure. ;-) You have until tomorrow (Monday) at midnight (Hawaii time) All the details are here.
Have a happy, healthy week!