Friday, I had some allergy testing done and with the rainy, stormy weather we've been having the past week, the doctor's office and especially the exam rooms were freezing. Stuck in there for a couple of hours, much of it clad in a paper top, I couldn't seem to get warmed up afterward and even drove home with my car heater on. Needing something to warm me up fast, my thoughts turned to this extremely quick and easy Thai Tomato Soup. 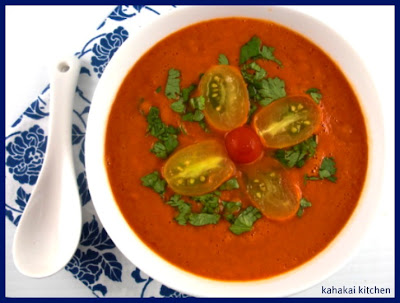 This is actually a repeat soup--it appeared here a year ago but it has appeared at my table multiple times since then. Made in my VitaMix blender in about 10 minutes, it is an excellent go-to soup when I want something warming, creamy and filling as quick as possible. The Thai flavors jazz up the soup and the coconut milk gives it the creamy decadent taste I crave but without dairy. Making it with a little low-sodium tamari instead of fish sauce kept it compliant with the "plant strong" diet I am following as part of the Engine 2 Diet 28-Day Challenge that I am doing. 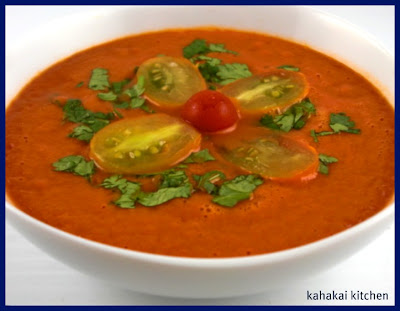 Put all ingredients into a Vitamix or high-speed blender and blend on high for about 4 minutes until steam starts to rise from lid. Serve immediately garnished with a tablespoon of chopped cilantro and a lime wedge.

If you don't have a Vitamix or high power / high speed blender, you can make a similar soup (it will just take a bit longer) by thoroughly blending all of the ingredients except the coconut milk in a blender until smooth, then heating it in a pot over medium-high heat until hot, turn down to simmer, stir in coconut milk and heat through. 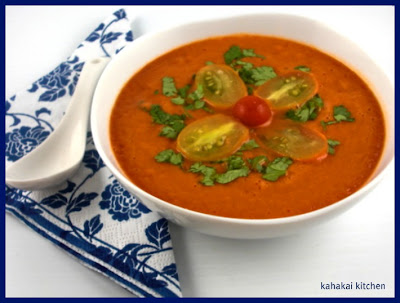 Notes/Results: Flavorful and lightly spicy, this soup never fails to make me feel cozy and satisfied. I often add roasted red pepper but I was out of the jarred kind and in too much of a hurry to warm up to roast my own. To make it more of a meal, serve with a salad, summer rolls, rice crackers or a bowl of brown rice.

Now lets take a look at who is here for Souper Sundays this week.

Ahkeela from Torview Toronto is back this week making the most of spring's asparagus with a creamy Asparagus Potato Soup (in the coolest soup bowls that I am now coveting). ;-) Ahkeela says, "It is a very easy flavourful soup with a lovely texture. I usually make this soup for dinner and it goes well with bread and it is filling soup." 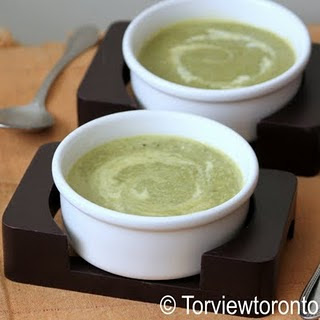 Roz from la bella vita has Ina Garten's Creamy Cucumber Salad with Fresh Dill to share and says, "Her recipe is different than most traditional recipes in that she uses hothouse cucumbers and yogurt to create a "lighter and sweeter" flavor, rather than mayonnaise and/or buttermilk. There is also no sugar in this, which you might want to add if you like. One of the noticeable differences unique to her recipe that really makes a huge difference is that she drains the excess liquid from both the cucumbers and the yogurt. This produces a more silky, creamy sauce that is far less runny!" 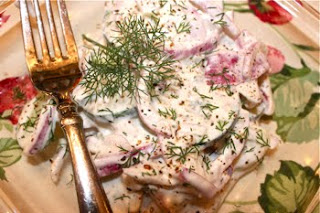 Denny of Oh Taste and See... made Tabbouleh and says it, "is a very popular salad from the Middle East/Arab regions. The actual Arabic word meaning ‘a little spicy’, this salad is typically made from bulgur wheat, combined with herbs, tomatoes and dressed with a simple olive oil, lemon juice vinigarette. ... The lemon juice perks up the flavors of the vegetables and makes it a refreshing dish. It tastes better as it sits, which makes this a great salad for taking along in picincs etc. Healthy and tasty." 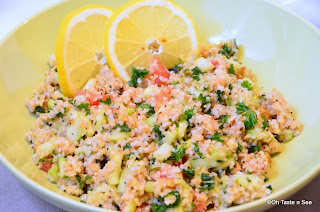 Michelle from Ms. Enplace tried Jamie Oliver's Summer Chickpea Salad and says, "We had feta cheese and red onion leftover from some Greek meatballs. And I often seem to have chickpeas (or chicken pebbles as The Boy calls them) in the pantry. The mint and basil came from my garden. Unfortunately I had to buy cherry tomatoes because mine aren't quite ripe yet. We all thought this was a nice, light, seasonal salad...one we'd make again." 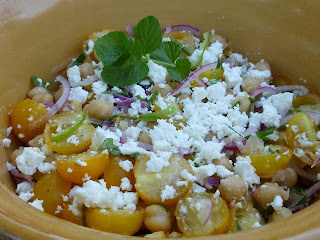 Janet from The Taste Space made both a salad and a sandwich this week. About her salad, this Chickpea Salad with Mexican Mango Dressing she says, "I adapted it from My New Roots, where chickpeas are tossed with crispy carrots, crunchy red bell pepper, hidden slivered spinach and fresh cilantro in a creamy, zippy dressing made from pureed mango and lime juice. Feel free to use any assortment of crunchy vegetables and your favourite green for the salad. Don’t skip the cilantro, though." 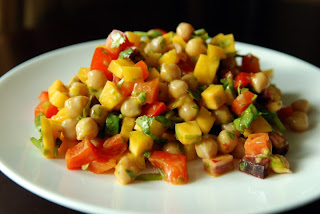 Janet's sandwich is this healthy Romaine Wrap with Hummus, Almonds and Prunes. She says, "I used the Romaine leaves as a base, topped it with a lemony-miso hummus, sprinkled some flax seeds overtop and added some almonds and prunes. Rolled it up and devoured. It worked wonderfully together, with both a mix of textures, but also complementary flavours. It was too good not to share with you, even if all I had were travel photos." 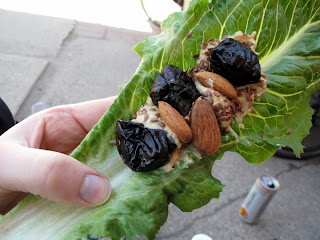 Joanne of Eats Well With Others made Marcus Samuelsson's Vegetable Pitas with Lemon Tahini Sauce and says, "He is a genius at combining flavors in new and incredibly exciting ways. In this case, taking an Indian-spiced veggie-rich pita filling and pairing it with a lemon-tahini sauce that is infused with chives. (Chives?!?!? Who would think of such a thing! But it's good. Really good.) Thereby combining Indian, Middle Eastern, and American flavors all in one dish! It truly makes for an incredibly healthy and tasty lunch. Especially when served with a homemade whole wheat pita." Congrats to Joanne who will be writing a weekly post for Samuelsson's blog! 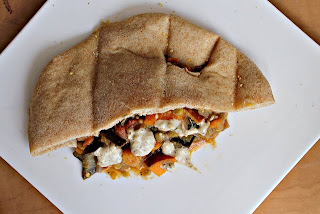 Danielle from Cooking for My Peace of Mind made this Tuscan-Style Chicken Sandwich and says, "Super easy....waaaaay yummy! It even says so in the cookbook. In MY writing. This is one of those little Pillsbury Slow Cooker mini-cookbooks from 2004. Not only did I write "YUM" at the top of the page but I made notes at the bottom for me to try in the future. And had not made this sandwich since. Which was really dumb cuz it really is good. Last weekend when I made my Sourdough Ciabatta.....thank God I remembered this recipe! It was perfect! Rustic, filling, yet fresh and flavorful....and and....just plain......YUM!' 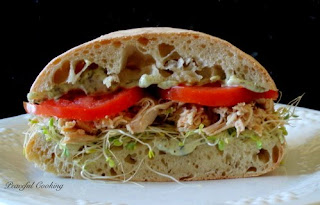 A nice little round up of some truly tasty dishes. Thanks to everyone who joined in this week. If you have a soup, salad or sandwich recipe that you would like to share, just click on the Souper Sundays logo on the side bar for all of the details.
Happy Mother's Day to all the moms out there, and a happy, healthy week to all of you!