It's Plenty-o-Pasta week at I Heart Cooking Clubs which meant I had to find a Jamie Oliver recipe that was compliant or could be adapted for the Engine 2 Diet Challenge (vegan/no-oil). There were only a few recipes in my books and online that didn't rely on some kind of animal product or cheese as the star ingredient although none were wowing me. I finally decided to try his Classic Tomato Spaghetti--removing the olive oil and Parmesan and adding a few extra touches to keep it interesting. 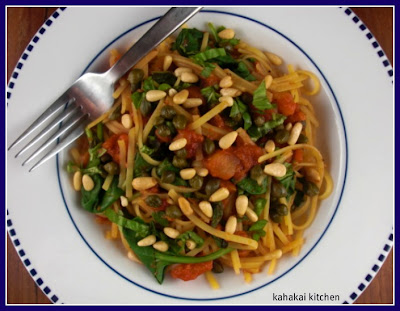 Extra garlic and a little cinnamon keep the sauce full of flavor, baby spinach packs in some added nutrients, and with the addition of my beloved capers and a sprinkling of toasted pine nuts, the Parmesan wasn't missed at all. My changes/additions are in red below. 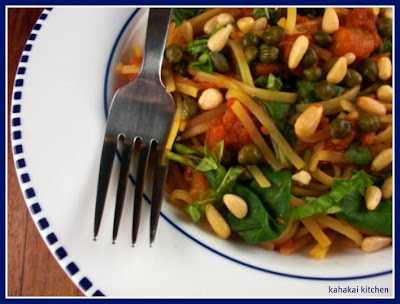 To prepare your pasta:
Peel and finely slice garlic. Finely slice chili (halve and seed it first if you don’t want the sauce too hot). Pick basil leaves off the stalks and put to one side. Finely chop the stalks.

To cook your pasta:
Bring a large pot of salted water to a boil, add the spaghetti and cook according to the package instructions. Meanwhile, put a large saucepan on a medium heat and add two good lugs of olive oil. Add the garlic, chili and basil stalks and give them a stir. When the garlic begins to brown slightly, add most of the basil leaves and the canned tomatoes. Turn the heat up high and stir for a minute. Season with salt and pepper. Drain the spaghetti in a colander, then transfer it to the pan of sauce and stir well. Taste and add more salt and pepper, if you think it needs it.

To serve your pasta:
Remove from heat. Roughly tear over the remaining basil leaves and grate over some Parmesan. 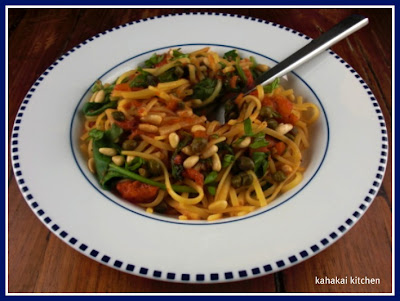 Notes/Results: Really delicious--I was surprised how much flavor this dish had and how good it was. The sauce was nicely spicy (I thought I had a chili in my veggie drawer but when I realized I didn't, I added a good pinch of dried red chili pepper flakes), and the cinnamon gave it a rich complexity. I used quinoa pasta--eats pretty much like regular pasta in texture put with over twice the fiber. The capers added a great salty-tangy kick and the pine nuts provided a little crunch. When I reheated the leftovers, I stirred in some nutritional yeast which also added to the dish and gave it a nice "cheesy" element. This was a very quick and low-effort dish to make--under 20 minutes total, doing all the prep as the pasta cooked. Engine 2 Challenge aside, I will happily make this healthy pasta dish again.

You can check out plenty-o-pasta at IHCC by going to the post and following the links.