I try to listen to what my body is craving and wants me to eat, which sometimes means having to block out my mind, which more often than not is liable to say "cupcakes, chocolate or french fries" when consulted. For the mind it is all about immediate gratification, what it thinks it wants. My body on the other hand will "tell" me what it needs. Maybe it requires protein, or it needs some healthy fats, or thinks it is time to pile on the green veggies. This weekend the body's cravings have been mostly for "cooling" foods, like juicy fruits and vegetables, so it seemed like a good time to try this easy, raw Cucumber Avocado Soup from "The Raw 50: 10 Amazing Breakfasts, Lunches, Dinners, Snacks and Drinks For Your Raw Food Lifestyle" by Carol Alt. 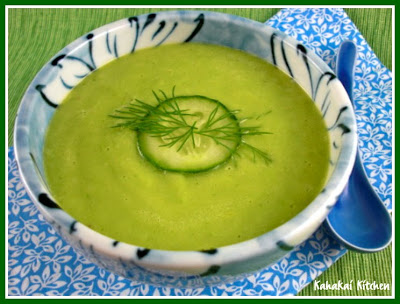 You might remember that I made a guacamole-ish looking raw soup a couple weeks ago; this one is lighter but still very satisfying from the avocado. It is flavorful and good, and perfect for lunch or dinner when the weather is warm.
Alt says, "This soup is so light and fresh that one thing you won't feel after eating it is "fat." But it has the kind of fat your body really needs." 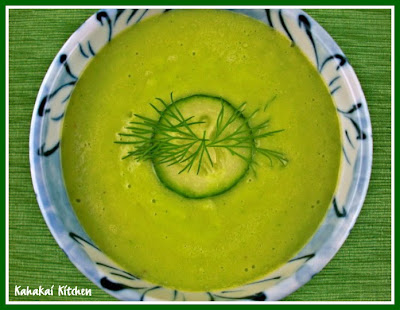 Tip: The phrase "cool as a cucumber" refers to the fact that cucumbers have such a high water content that they can remain 20 degrees cooler than the outside air when the temperature spikes. The cuke is a diminutive cousin to the watermelon, works as a diuretic, and has other cleansing properties. Besides being one of the most refreshing things to eat, it can be used topically to soothe burns and sores and soften the skin. 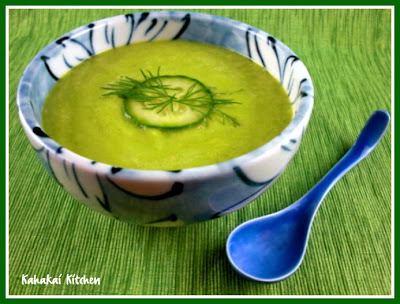 Notes/Results: Very good--great flavor and light, but still filling from the healthy fats. I did make a few changes--making a half-batch but keeping the same amount of avocado in it. I just wanted the texture a bit thicker. I also added a little extra lemon juice and a touch of sea salt and black pepper, which brought out more of the flavor. I'll make this again. 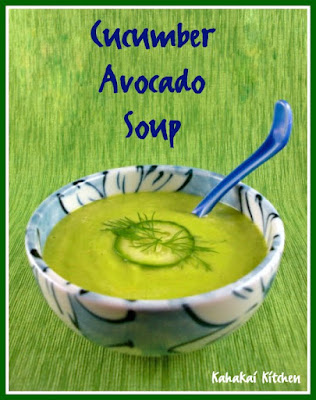 Let's see who is in the Souper Sunday kitchen this week:

Denny from Oh Taste n See is back this week and with a beautiful bowl of Chilled Carrot Coriander Soup. Denny says, "This soup resembles a gazpacho, in that it is served cold. But, unlike a gazpacho which uses raw vegetables, here the vegetables are cooked. This is also a ‘stove free’ or ‘hands free’ soup. Yep, all you need is the oven and a blender/food processor. I roasted the carrots with some spices and then pureed it in the food processor with some yogurt. Adding the creamy yogurt and the little flecks of green from the coriander to the soup, made it cool, refreshing and perfect for the summer weather." 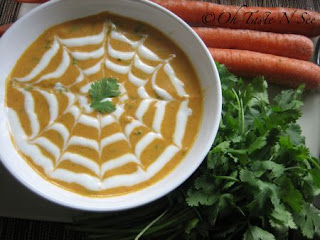 Spencer ("The Mouse") from Live2EatEat2Live took a cue from a favorite Disney movie and made a hearty "Mouseatouille"--his take on a ratatouille or vegetable stew. Spencer says, "Was the stew “authentic?” Probably not. Was I trying to be “authentic?” Definitely not. For me, part of the fun is getting inspired by food and putting my own twist on it. Along with salt and pepper, I used basil, marjoram, and oregano for seasoning. The Mouse was inspired by a rat, how appropriate, thanks Remy." 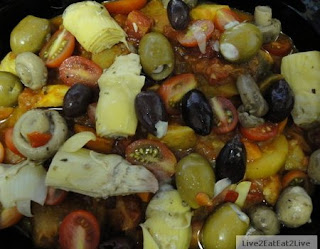 Julie from A Little Bit of Everything made a beautifully-colored Sour Cherry Soup and says, "Do you like cold soups? My first experience with cold soup was at a tea room in Eureka Springs, Arkansas. I loved the creamy texture. A bowl of cold soup is almost too much to serve with a meal. A small amount, however, is a refreshing treat on a hot summer day!
If you're looking to try a cold summer soup, give this one a try. It has a nice, not too sweet flavor with a hint of cinnamon." 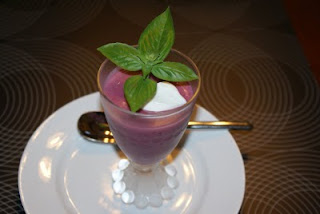 Please join me in welcoming Desiree from SteakNPotatoesKindaGurl, from Cincinnati, making her first appearance at Souper Sundays. Desiree made a hearty Potato, Cream Cheese, Bacon & Chive Soup and says, "I don't usually make soup so I thought this would be a good time to broaden my horizons, and I had been eyeing a recipe of Reeni's over at Cinnamon Spice & Everything Nice. It has everything that I love - potatoes, cream cheese, and bacon. This soup tastes good as leftovers. Like I said, I am not really a soup kind of person. But when it has so many things that I like, why wouldn't I like it!? I can't wait to make this again :)" Nice to have you Desiree! 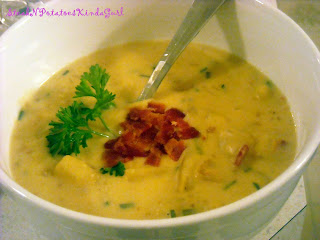 It is lovely to have Lynde from Vinegarlic back again this week and with a bright green and healthy bowl of Turkey Chili Verde. Lynde says, "Chili verde is a refreshing dish that incorporates a lot of beautiful summer produce. It is a great make-ahead meal; like all chili, it is even better reheated than when freshly made." 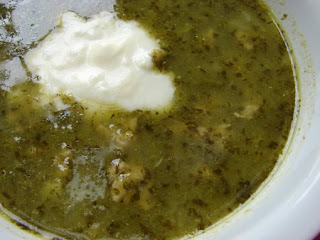 Reeni from Cinnamon Spice & Everything Nice has a gorgeous bowl of Spicy Gazpacho with Lime Shrimp to share this week and says, "You can serve gazpacho as an appetizer shooter-style or kick it up to main dish status with the addition of grilled shrimp or chicken marinated in lime and cilantro. The silky base of the soup is made of tomatoes, cucumbers, bell pepper and jalapeno pureed along with stale bread, olive oil and lime juice. For serving it's topped with diced vegetables, croutons and in this case, shrimp." 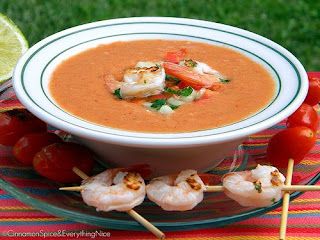 Kim from Stirring the Pot made a fun Cheesy-Spicy Corn and Corn Chip Salad this week and says, "This salad is a combination of corn, which has been cooked and sliced off the cob, shredded monterey jack cheese, shredded iceberg lettuce, chopped bell peppers, chopped jalapenos, sliced red onion, and chopped cilantro. Everything gets tossed with a bit of mayo and then topped with crushed Fritos. This salad makes for a gorgeous presentation and we really enjoyed it." 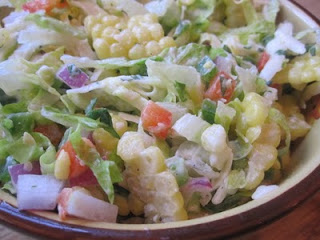 Joanne from Eats Well With Others made Michael Symon's Heirloom Tomato Salad with Red Onions, Dill, and Feta. Joanne says. "Although I will say that you have to actually use heirloom tomatoes for this, at least if you want to get the full delicious effect. I used to be of the opinion that all tomatoes were created equal. I was wrong. Heirlooms tomatoes have such complex, intriguing flavors. That they put regular old vine-ripened Camparis. To shame. And take what would be an otherwise ordinary tomato salad with feta and dill. And make it something that you will actually start to crave." 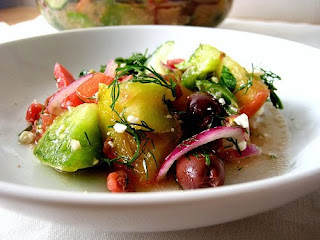 It is great to have Lauren at Healthy. Delicious. back this week at Souper Sundays. Lauren made a gorgeous Porcini Dusted Ribeye and accompanied it with this colorful Green Bean Salad. She says, "I came up with this porcini dusted steak with red wine sauce and a summery green bean, corn, and tomato salad on a whim, and I couldn’t have been happier with it. The salad was light and fresh, featuring some of the best that August has to offer. And the whole thing was on the table in under 15 minutes. Which meant I could get back to the couch and put my feet up in half the time it would have taken to get a pizza delivered." 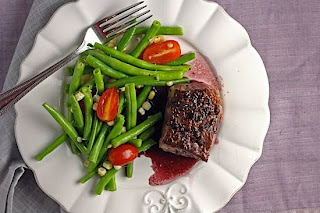 Janet from The Taste Space made another amazing grain salad, this Wheat Berry, White Bean and Edamame Salad, and says, "This was a light yet hearty salad at the same time. It was hearty with one of my favourite whole grains: wheat berries. Nutty and chewy, they can really hold their own in a salad. Sweet cherry tomatoes, creamy edamame beans and white beans are added for further textural and nutritional contrast. The dressing is a plain red wine vinegar vinaigrette and the red onions add the bit of kick needed for such a simple salad."

Pam from Sidewalk Shoes made a Chicken, Rice and Black Bean Salad and says, "I made this with brown rice. It’s my effort to be healthier. I shouldn’t have. Though I try, I just can’t embrace the whole grain thing. I much prefer white bread over whole wheat, regular pasta instead of whole wheat and white rice over brown. So, making this recipe with brown rice already kicks it down a notch in my book. I am posting this because my husband liked it. It was nice and healthy and a way to use up some leftover chicken. I think it could be jazzed up a bit, maybe some lime juice or something." 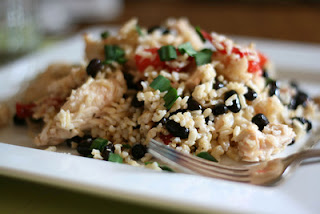 girlichef used Chile Colorado, a spicy, flavorful beefy filling to make these Tortas con Chile Colorado, a hearty Mexican sandwich. girlichef says, "I went ahead and used my filling in tortas for dinner that day. I toasted the bolillo on the cut sides, then flipped and added crema, romaine, cilantro and the hot chile colorad. I added the tops and toasted both sides...sliding in some avocado at the end. Soooooo good." 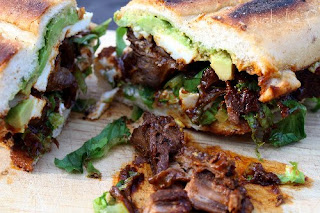 Another great group of recipes this week! Thanks to everyone who joined in. If you have a soup, salad or sandwich that you would like to share, just click on the Souper Sundays logo on the side bar for all of the details.
Have a wonderful week!