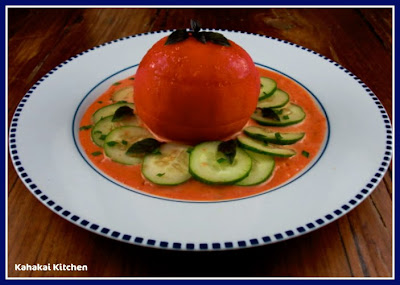 Madison Merlot Dayne thought she was in for a week-long working vacation, shooting video and photographs for her celebrity chef father, Jeffery Dayne's, television show "Insatiable Delights." Hoping this gig would further her career and get her a job producing, while looking for some downtime on the beach--maybe topless, tropical drink in hand and with some island romance thrown in, she isn't expecting to find herself caught up in mystery and possible murder. Right after their arrival on the island, a beloved local singer dies, (possibly poisoned?) after consuming the welcome lunch meant for Madison and her father, putting them smack in the middle of a lot of excitement and hoping to make it through the week alive. "Captain Cooked" by S.P. Grogan is a "Hawaiian Mystery of Romance, Revenge...and Recipes!" 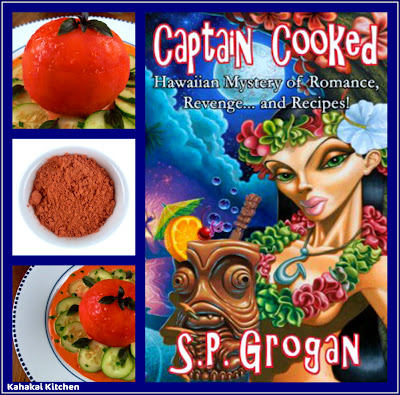 The book, set on the Big Island, is full of action with everything from local groups rioting over land rights, an earthquake, some dangerous lava flow, and more than a few "accidents" creating excitement as the crimes start piling up. Being foodies, Madison & Jeffrey take time to eat well all around the island as they go about solving the mysteries and getting material for the show. Madison even manages to work a little romance in with flirtations with three very different men--could any of them be involved? The book is more than a foodie mystery with descriptions of food--there are 25 recipes from some of the island's most popular chefs sprinkled throughout the book. The book is also the second "quest" adventure book from author S.P. Grogan, (the first being set in Las Vegas), with clues to a real "treasure" hidden somewhere on the Big Island. In this case, the treasure is a lei-'o-mani or a shark teeth war club, that if found using the clues and GBS coordinates in the book, can be turned in for a $5,000 cash prize. Mystery-thriller, romance, cookbook, Big Island travelogue, mini-Hawaiian history and culture lessons; there is a lot packed into this book! It was a fun read that kept me entertained, especially having spent time on the Big Island with many of the places visited so familiar.
Of course with so many recipes, I had to make one to go with this review and I picked the Blanched Tomato & Japanese Cucumber Salad with Li Hing Mui Vinaigrette by one of my favorite chefs, the legendary Alan Wong. This salad is a popular menu item at his Honolulu restaurant, in fact after seeing a picture of it in an airplane magazine my friend Rene', visiting a few months ago, insisted on trying it so we made a quest of our own to try it. (Actually the quest really just involved getting in the car, driving to the restaurant and sitting at the bar consuming the salad, other pupus and a few pineapple martinis, but "quest" just sounds so much more dramatic!) 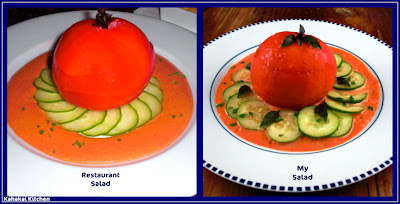 Here's the restaurant's version of the salad on the left and my salad on the right. Of course the lighting at the restaurants bar was not good for pictures but I think my salad looks pretty darn good in comparison--although my cucumber ring needs to be tighter! ;-)
A whole tomato is blanched, sliced in three sections and placed on top of a circle of overlapping slices of Japanese cucumber and the tart and tangy vinaigrette. The vinaigrette is comprised of two island favorite ingredients that you may not have heard of--li hing mui, a powder (in the large collage above), made from ground salty ground plum, and umeboshi paste, made from a pickled tart, sour and salty fruit (usually called a plum but actually closer to an apricot) from Japan. The resulting dressing is sweet, salty and very tangy and pairs well with the sweet tomato. I used a fresh North Shore Farms tomato, local Japanese cucumbers and local fresh eggs in the dressing. I garnished the salad with some small opal basil and chives from my lanai herb garden.
The entire recipe is in the book, but I ended up using this recipe for the vinaigrette from the The Splendid Table. (Mainly because the measurements in the book seemed a little funny in the quantities of the li hing mui and ume paste.)
Li Hing Mui Vinaigrette
From Alan Wong's Restaurant, Honolulu

Place all the ingredients except the oil and lemon juice in a mixing bowl.

With hand-held immersion blender on medium speed, slowly add the oil in a steady stream to create an emulsion. Continue until all oil is incorporated.

Finish with lemon juice. Chill until ready to use.

To make the salad: Score the bottom of a large tomato with an "X" and drop in a saucepan of boiling water for 10 seconds. Transfer tomato to an ice bath and carefully peel when cool, keeping the flesh smooth. Cut the tomato into three horizontal slices, keeping them stacked together. Slice a cucumber into thin slices, arrange on a salad plate in a circular design. Place tomato in the middle of the circle and pour vinaigrette around the arrangement. Sprinkle salt on top of tomato and garnish with basil sprigs and chives.
Notes/Results: A great combination of flavors and a fun presentation, this salad is very quick and easy to throw together making it perfect for either a dinner party or a simple night at home. I would make this again and plan on using my leftover vinaigrette for another salad.
If you want to learn more about "Captain Cooked" by S.P. Grogan, here is a link to the website. In addition to profiling the Big Island and featuring local artwork, local chefs and local food, for each book sold, a contribution is being given to The Food Basket--a Big Island Food Bank. Gotta love that! 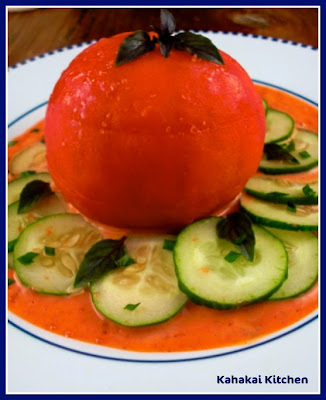 A little disclosure notice: The publisher was kind enough to send me a copy of "Captain Cooked" but my review and my thoughts & feelings about the book are my own.
BTW--You have until midnight (HST) to enter my giveaway for a fabulous Novica electronic gift certificate for $75. Get the details here!