To me the ultimate test for any book is to be immediately swept away when you open it, being pulled into whatever world that book portrays and to feel like you are actually a part of it. I had the pleasure of taking such a journey with the enchanting "My Nepenthe: Bohemian Tales of Food, Family and Big Sur" written by Romney Steele" as a copy was recently sent to me by the publisher to review. This is one of those cookbooks that from the start begs to be picked up, savored and soaked in, thick and gorgeous with its bright jewel-toned colors and amazing photos. With most cookbooks I review I do a quick read through of some of the key chapters, scanning the rest and going immediately to the recipes, with "My Nepenthe" I found myself keeping it on my nightstand and reading it page by page, chapter by chapter, each night until I finished it. It is not just a collection of recipes, although there are plenty of them, it is really the story of a magical place, Nepenthe--a restaurant and gathering spot on the cliffs of Big Sur in California. 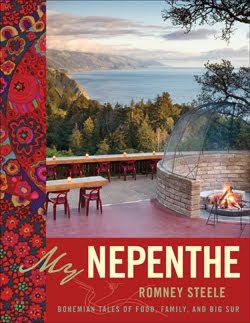 Nepenthe (derived from the Greek and meaning "no sorrows"), was started by the author's grandparents, Bill and Lolly Fassett who bought the land and cabin from Rita Hayworth, who received it as a wedding present from Orson Wells who she was in the process of divorcing. They moved their five children into the cabin and set about building the restaurant which opened in 1949 and then later on a shop below the restaurant and a rooftop cafe were opened. Romney Steele is a writer, cook and food stylist and the daughter of Bill and Lolly's youngest daughter, Kim. She grew up in this unique place and opened Cafe Kevah on the grounds of the restaurant. In "My Nepenthe" she offers her memories and stories of the restaurant, her family and the many "rugged individualists" as her grandmother called the guests and travelers who came to soak in the beauty and the bohemian lifestyle Nepenthe offered. A hang out for writers, artists movie stars, Nepenthe became a cultural icon and a place that featured poetry readings, folk dancing, fashion shows, concerts and even a movie (scenes of The Sandpiper with Richard Burton and Elizabeth Taylor were filmed on the terrace in 1964). Steele takes us to her Nepenthe through its history, family stories, the beautiful photos illustrating the book and of course the food.
According to Steele, "food was never the point at Nepenthe, but it was always good and presented with care." Her grandparents believed in serving the best that was available and the menu was simple and limited so it could work within the locations and resources. The book includes 85 recipes and I easily tagged a couple of dozen that I wanted to make but narrowed it down to six dishes to "road test" for this review.
Let's start out with a little cocktail. I made the Moscow Mule, vodka (Smirnoff), ginger beer, a squeeze of lime and garnished with a slice of cucumber, because although I had heard of this drink, I had never tried it. My loss because it was refreshing and delicious, especially with some lemon vodka. The book says, "This sharp gingery drink was served for a time in a copper metal cup with a kicking mule insignia, a marketing scheme by the creators of the drink and popularized in Hollywood. It became a Nepenthe classic." I will be making this drink again and again. 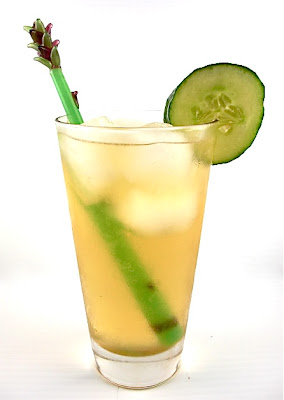 Nepenthe's house salad, The Chopped Salad with Roquefort Dressing turned out to be very flavorful and delicious. It's a simple salad of torn romaine and green leaf lettuce, a cherry tomato, and topped with a oil and vinegar style dressing with chunks of tangy Roquefort cheese. Since I had a container of local cherry and grape tomatoes, I upped the amount of them in the salad. Besides the cheese, the dressing is full of dried herbs and spices which give it great flavor. A nice salad to start a meal with. 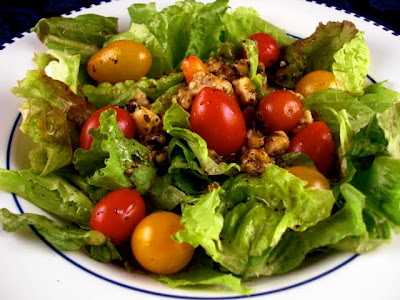 I knew I had to make was the Grilled Swordfish with Sour Cream-Caper Sauce (Need you ask why? It was the capers of course!). The book says "Nepenthe first served grilled swordfish in the '50s or '60s as a special and my grandmother topped it with a savory sour cream-caper sauce. We used to brush the swordfish with butter while grilling, but I prefer to drizzle with olive oil beforehand as they do in Italy, where I imagine my grandmother first enjoyed this meaty Mediterranean fish." I used some local shutome (Hawaiian swordfish) and cooked it in my grill pan on the stove. The steaks are served over arugula or baby spinach so that the greens wilt a bit from the heat and are topped with the creamy sauce. I used a low-fat sour cream but with the capers, hot mustard, horseradish and other ingredients you can't tell the difference. A quick and easy dish with wonderful flavor. 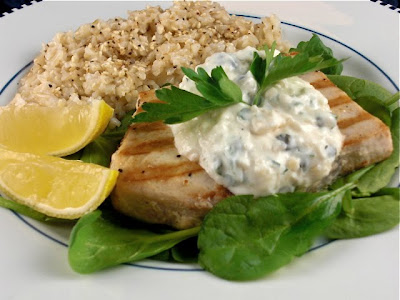 I served the fish with a simple Oven-Baked Rice, the book describes as "Perfect rice every time with no attention." I used a long-grain brown rice, and for the fish, added a topping of some gomashio, a Japanese condiment made of toasted sesame seeds and salt. It turned out well and was nice and moist after about an hour in the oven. 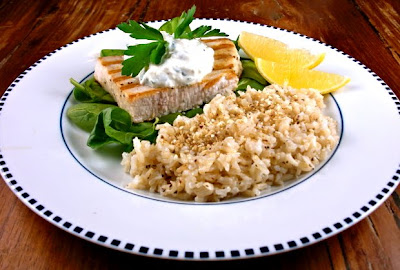 Since I already had the rice and was craving curry, I gave Lola's Lamb Curry a try. The book says, "My grandmother's sweet and tangy curry was a family favorite and originally published in Recipes for Living in Big Sur. I have given it a slight update, included measurements, and added chile for spice. Serve with Lolly's Oven Baked Rice." With green apple, fresh pineapple, raisins and shredded unsweetened coconut, it was a bit different and sweeter than most of the curries I make but very good. The chunks of lamb shoulder were tender, the coconut milk made it creamy and the chile added a slight kick. I topped it with chopped cilantro, mint and toasted almonds and enjoyed it even more reheated the next day. 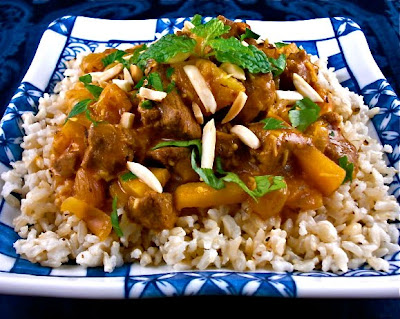 Finally I love a good carrot cake and really wanted to try Kim's Loaf Carrot Cake which was a recipe from the author's mother, baked in loaf pans and "sold in thick slices right out of the pans" in the juice bar. The cake is made with equal amounts of unbleached white flour and whole-wheat flour and is very moist with a tender crumb and wonderful flavor. 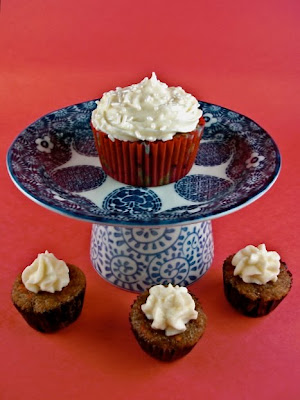 I ended up making the cakes into both mini and regular size cupcakes to take to a holiday lunch and cookie/cupcake tasting and exchange where it won "Best Cupcake" over some delicious competition including red velvet and strawberry lime cupcakes, so you know it had to be good! ;-) 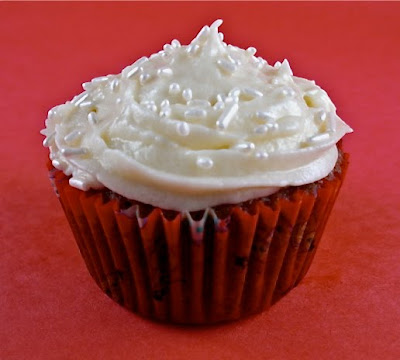 I really enjoyed everything I tried from the book and I still have many recipes tagged to make such as Sour Cream-Apple Coffee Cake, the Ambrosia Burger, Lolly's Famous Hotcakes, Lolly's Roast Chicken with Sage Stuffing, and Cafe Kevah Granola to name a few. "My Nepenthe" will have a place of pride in my cookbook collection--if I ever take it off my nightstand. It is a perfect choice for anyone who loves great food and a great story--a truly special book.