This weeks theme for I Heart Cooking Clubs, featuring the recipes of Nigella Lawson is "Spooky Treats & Spirits"--Halloween inspired drinks or goodies, Nigella recipes slightly "twisted" to make them spooky and fun. I chose to take an easy dessert with fall flavors, her Calvados Syllabub--basically a frothy whipped cream dessert full of cinnamon, calvados (apple brandy) and hard cider, and make it into some spooky fat ghosts. (Mainly spooky because they ended up looking like a kindergarten art project!). ;-) 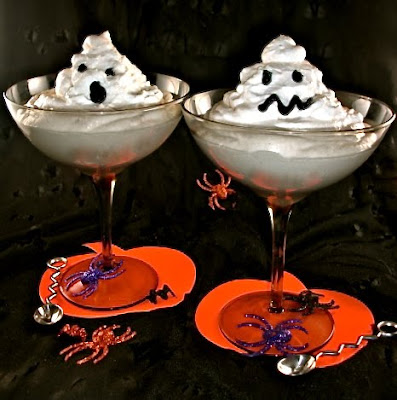 Syllabubs are defined (in The New Food Lover's Companion) as: "This thick, frothy drink or dessert originated in old England. It's traditionally made by beating milk with wine or ale, sugar, spices and sometimes beaten egg whites. It's thought that the name of this concoction originated during Elizabethan times and is a combination of the words "Sille" (a french wine that was used in the mixture), and "bub" (old-English slang for "bubbling drink")." I first made one of Nigella's syllabubs a few months ago for Cook the Books, our virtual foodie book club, when I made her Turkish Delight version--you can see that one here. I was pleased with how light, delicious and easy to make this dessert is.
With the alcohol, this is a dessert for the adults hanging out at your Halloween party. So give the kids some cookies and give your friends a glass or bowl of this frothy, fluffy, festive fall concoction for a spooky treat with the "spirits" mixed right in. 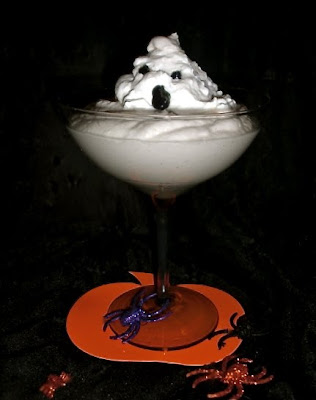 This recipe can be found in How To Be A Domestic Goddess (pages 138-139) or on Nigella's website here.
Nigella says: "Syllabub is one of those ethereal, dreamy confections which seems at odds with the description "dessert". But this scented, whipped cream, piled up to swell cloudily out of it's container, is a perfect way to end dinner and gloriously easy to boot."
Calvados Syllabub
How To Be A Domestic Goddess, Nigella Lawson
(Serves 4)
8 tablespoons dry cider
2 tablespoons Calvados
1/4 teaspoon ground cinnamon
4 tablespoons caster sugar
juice of 1 lemon
300ml double cream
4 cinnamon sticks (optional)
4 x 150ml glasses

Put the cider, Calvados, ground cinnamon, sugar and lemon juice in a bowl and stir until the sugar’s dissolved. Keep on stirring as you gradually pour in the cream. Now, using a wire whisk or an electric one at low speed, whip the syllabub until it is about to form soft peaks. It should occupy some notional territory between solid and liquid – you’re aiming for what Jane Grigson calls ‘bulky whiteness’ – so be careful not to let the cream become too thick or, indeed, to go further and curdle.

Spoon the syllabub into the glasses and puncture each semi-solid mound with a cinnamon stick, just as a Flake is plunged into a scoop of ice cream. If that’s just a little too frou-frou for you (and I quite understand), simply dust the uneven tops with the merest haze of ground cinnamon. 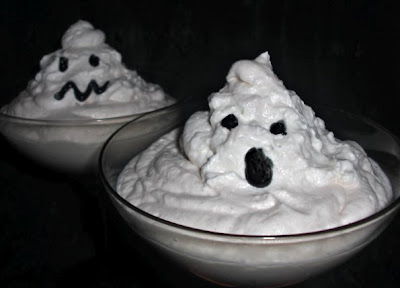 Notes/Results: Oh my friends, this is a good one! So easy to make and so delicious too. It is a nice combination of light and sweet, but not too sweet and the flavors put you in an autumn mood. With dishes that contain alcohol, I am often concerned that that is all that you will be able to taste but the calvados and the hard cider, (I used a lovely Pear Cider from Fox Barrel Cider Company--which I am going to buy more of for fall. It is so good!), are both smooth, taste of fruit and combined with the cinnamon cut the sweet taste down a bit. It is very quick and easy to make. For a party, I would prepare the flavor base and then right before serving quickly whip in the cream until "pillowy" and serve right away. Speaking of serving, I would put this dessert in smaller glasses or bowls. I was going for picture effects here and the glasses were the ones that fit that Halloween mood best. I had hoped for them to be a bit more firm to mold into ghost-like shapes, but did not want to take away from the integrity of the dessert texture or over-whip them until they curdled so I went for fat, puffy ghosts, drawing the eyes and mouths with a black gel frosting tube. In the book, Nigella had these looking very sophisticated in pretty glasses with cinnamon sticks stuck in the sides of the syllabub, so you can easily make this into an elegant dessert too. I will make this again 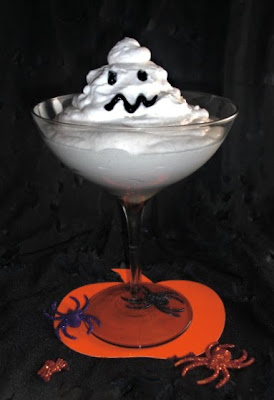 Talk about spooky--for some reason one picture I took had some interesting effects when I downloaded it off of my camera. ;-) Were the spirits moving? 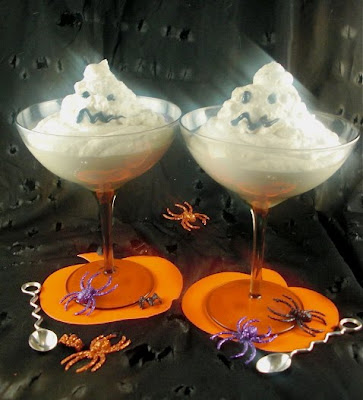 You can check out what the other I Heart Cooking Club Participants made this week by going to the IHCC site here. And for other spooky Halloween treats, check out my Breadstick "Bloody Fingers" with "Pink Eyes" cocktails for last years Blog Party "Gross Anatomy" here. And tune in tomorrow for some festive Carrot Hummus. 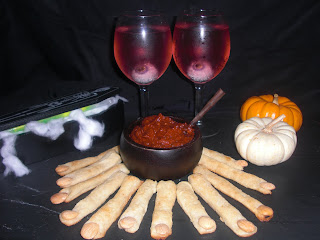 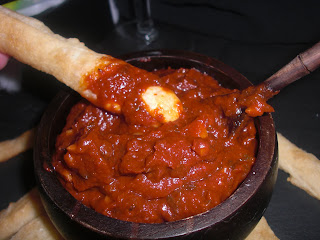