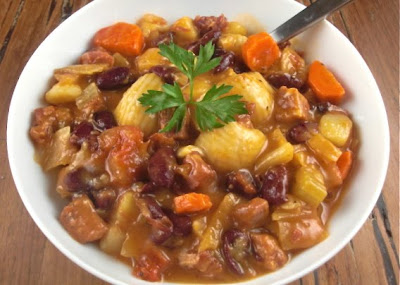 When selecting this week's soup, I decided to make Portuguese Bean Soup, (a local favorite here in Hawaii), so my Mom could try it. Just about every local cookbook I own has a recipe for it, but I finally settled on a recipe from By Request: The Search for Hawaii's Greatest Recipes by Betty Shimabukuro of the Honolulu Star-Bulletin. It is the recipe used for the Punahou School Carnival, scaled down, as for the carnival upwards of 1,800 gallons are prepared each year. (I figured if they sell that much of it, it must be good!). I boiled the ham hocks and made stock from them the night before, then Mom and I made the soup after a long day on the North Shore and a warm bowl of it really hit the spot for dinner.
The book says, "It is especially filling, with cabbage and macaroni cooked in. To cut the fat in this soup, cook the ham hocks a day ahead and refrigerate the broth. The next day, remove the hardened layer of fat atop the broth, then complete the soup." 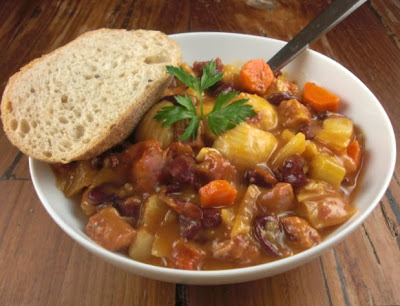 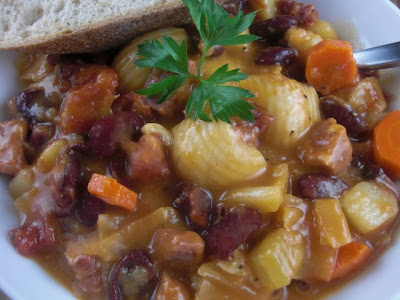 Notes/Results: This is a wonderful soup, very thick, hearty and so full of flavor. One of those soups that you just want to keep eating even as it fills you up and it tastes just as good days after it is made. We made a few changes, starting with cooking the ham hocks in a combination of chicken stock and water, for the extra flavor. Next, we reduced the amount of Portuguese sausage from 1-lb to about 1/2 pound, (with the meat from the ham hocks, all the veggies and the macaroni it was more than plenty), and used about 1/2 of the head of cabbage. Speaking of the macaroni, I used about 2 cups and rather than the normal smaller elbows, I used some larger pasta that was marked "conchiglie" or seashell pasta on the package, (although I think they resemble a small "lumaconi" or giant snail pasta in their shape--see pasta shape pictures here). Finally, we cooked the soup for about 50 minutes which was plenty and since we don't like mushy pasta or cabbage, I added the pasta about 20 minutes out and the cabbage and meat from the ham hocks (so it wouldn't break up too much) at about 10 minutes out. I bought a local Portuguese sausage (from Kukui Sausage) at the farmer's market but if you can't find Portuguese sausage where you live, (it is sometimes called Linguiça and is a cured pork sausage seasoned with onions, garlic, and paprika), you could easily use a spicy kielbasa or a smoked Spanish chorizo. This is a keeper recipe and won an enthusiastic thumbs up from Mom too. As you know, I make and eat A LOT of soups and this one is definitely going into my "Top Ten Best Soups" that I will be posting in a couple of weeks as Souper (Soup, Salad & Sammie) Sundays hits its one-year anniversary. 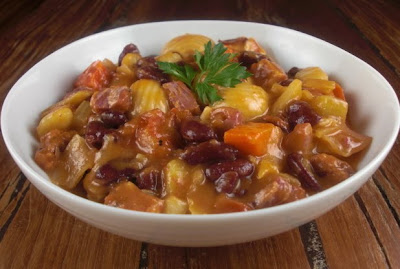 A quiet Sunday, we just have a few friends in the kitchen this week but it looks like they brought some yummy soups and stews to try:
Debs from Deb Cooks... is back this week with a warm and toasty French Onion Soup. Debs says, "It's beginning to feel like summer is over and this weekend it didn't stop raining (grrrrr) so I felt in the need for some comforting soup to warm me up. Not that it was cold, but with the rain comes the dreaded feeling of winter on it's way. Anyway, now I've depressed you all, here's the recipe that'll cheer you up as well as warm you up. Yeah, yeah, I know I should have wiped the bowl before putting under the grill, to remove the little bit of soup I spilt, and it would not have got baked on. Hey ho, a rustic dish should look rustic I say." 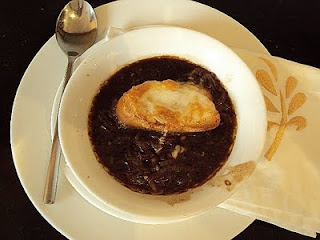 A foodie classic was on the menu for Natashya from Living in the Kitchen with Puppies. She says, "This month for Recipes to Rival, we made Julia Child's Boeuf Bourguignon, a beef stew made with red wine, bacon, mushrooms and onions. As was her custom at the time, there are a large number of steps that seemed superfluous; so I simplified the way I made mine. For my own I didn't blanch the bacon, just browned it and the other ingredients bit by bit, the beef tossed in the flour & salt and pepper, and tossed all the browned meat and veggies into the slow cooker. Then I used the liquid to deglaze the pan, seasoned it with the garlic, thyme, tomato paste and salt and pepper and reduced it before adding it to the slow cooker. I stirred the stew together, adjusted the seasoning to taste, and cooked it in the slow cooker for about 5 hours. It turned out wonderfully, nice and tender and rich, and lovely on a bed of buttered whole wheat egg noodles." 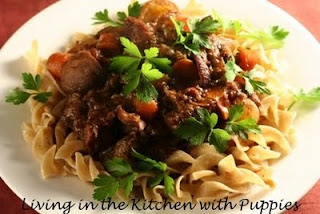 Kait from Pots and Plots has been attempting to recreate a favorite restaurant dish. Kait says, "Three years ago one of our local restaurants had a soup they called Baja Chicken Enchilada Soup. I got to have it maybe 3 times before it was permanently removed from the menu due to lack of interest. I just have to say how much that totally SUCKED because this soup was awesome. So I have been trying to duplicate it from memory ever since. Nothing has been quite right and by now, I’m sure I barely remember what it tasted like. But then I threw this together this morning for a last minute Thoughtless Thursday post. By Jove, I think I got it! Or at least something I’m willing to accept as sufficiently awesome that I’ll keep the recipe. It’s not as fix it and forget it as a lot of crock pot recipes, but it’s well worth the effort. And at only 344 calories and 10.4 grams of fat per bowl, it’s a dieter’s dream." 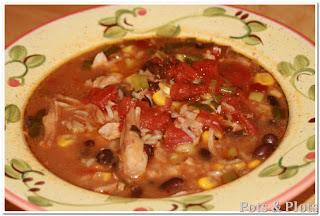 Thanks to Debs, Natashya and Kait for keeping me company today and sharing their wonderful dishes. If you have a soup, salad, sandwich or combination that you would like to share, click on the logo on the side bar for all the Souper (Soup, Salad & Sammie) Sundays details.
Have a great week!