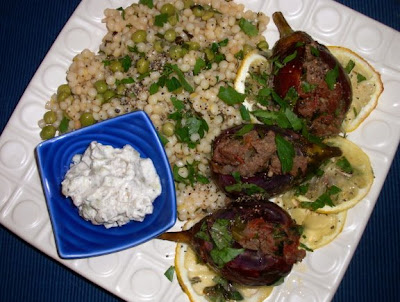 After finding some baby eggplant at the Thai market, I wanted to find a great recipe to use them in, so of course I went to Tyler. He had two recipes that I was torn between, in what is probably my favorite Tyler cookbook; Eat This Book: Cooking With Global Fresh Flavors. (In addition to the great recipes in this book, sometimes I just like to stare at the cover!) 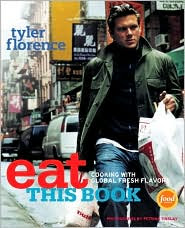 The first recipe had the eggplant sliced in a curry sauce and then there was this one for Baby Eggplants Stuffed with Lamb, Lemon and Mint, made with ground meat, tomato and spices. I had a tough time choosing, but the idea of stuffing the little eggplant won out. Ground lamb is a bit "hit or miss" to find here, so I used some ground buffalo which is rich tasting, leaner than lamb and has lots of protein.
This recipe can also be found at the Food Network site (as Stuffed Baby Eggplant from Food 911) here, and is on page 58 of Eat This Book.
Tyler says: "Lamb and eggplant is a combination that travels across the culinary map from Northern Africa to the Mediterranean and the Middle East. This is my take on a Turkish dish of stuffed eggplants called imam bayildi--stuffed eggplant. If you can't find ground lamb, ground beef or pork will work just as well." 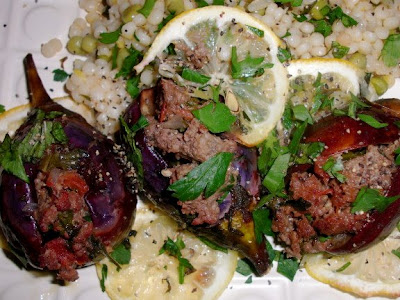 Preheat the oven to 350 degrees F.

Using a paring knife, cut a wedge out of each eggplant, from stem to base, just large enough to stick a spoon inside and scoop out the flesh inside. Discard the flesh you scoop out.

Coat a large saute pan with the oil and place over medium flame. Lightly fry the eggplants on all sides, until slightly charred and blistered; remove to a platter and set aside.

Return the pan to the heat and add the shallots and garlic, saute for 5 minutes, until soft and golden brown. Add the ground lamb to the pan and brown the meat well, breaking it up with a wooden spoon. Stir in the tomatoes, combine well, and let simmer for 5 minutes; season with salt and pepper. Toss in a couple of handfuls of the parsley, the mint, and lemon juice; continue to cook for 2 to 3 minutes. Remove the pan from the heat and let the stuffing cool slightly. Using a spoon, stuff the lamb filling into the eggplants until they feel full, but not overly packed. 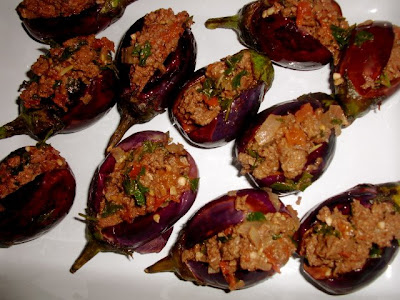 Arrange the eggplants in a single layer in a large saucepan, pour the chicken stock over them and lay the lemon slices on top of each eggplant, drizzle with some more olive oil. Bake for 20 to 30 minutes, or until fork tender. 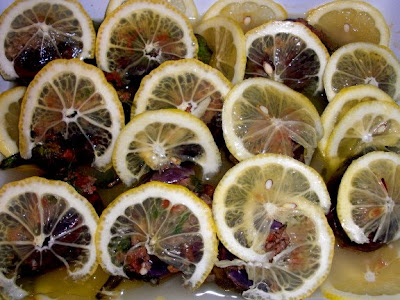 Garnish with fresh parsley before serving. 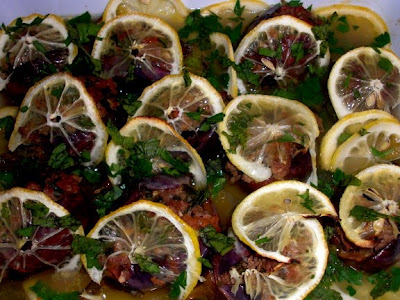 Notes/Results: Yum! I loved the lemon and mint and the way it complimented the ground meat, tomato and eggplant. There were no pictures of this dish and I wasn't quite sure how it was supposed to look so I just went for it. My baby eggplants were a bit smaller than lemons (as the recipe specifies), they were more like small limes so I watched the cooking time carefully so as not to have "mushy" eggplant, (A pet peeve of mine). I baked these for just about 20 minutes and they seemed right. I also cut the stuffing recipe in half and still had just a bit leftover from my eleven little eggplant. A note; the Internet recipe above, makes a larger quantity of stuffing than then book does, (the book calls for 1 lb lamb, two tomatoes, 1/2 bunch of parley, etc.) and the book's proportions make more sense based on the size and amount of eggplant you are stuffing with the mixture. 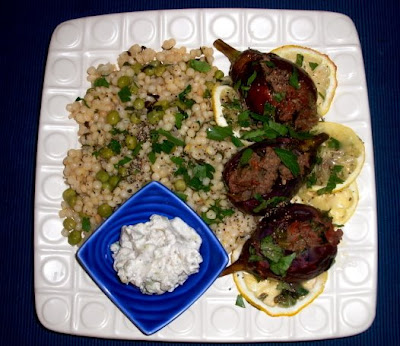 These were great served with some leftover Israeli couscous  and raita (cucumber-yogurt sauce), that I made from a cookbook I am reviewing, (I will post that review early next week). I think that with the smaller eggplant, they would also be fun as an appetizer, passed on little plates. The flavor was good, but I think next time, I would add some cayenne or some hot pepper to the mix--just for a little pop. My raita had some spice and it really added to the flavor. Not the prettiest dish in town but it is tasty and I would make them again. And BTW, since I had such a hard time choosing between this recipe and the curry dish, I bought some more eggplant today and will be making that dish for next week.
You can see what recipes the other Tyler Florence Friday participants selected for this week and what they thought of them by going to the TFF website here.
Happy Aloha Friday!  Have a great weekend!
Posted by Deb in Hawaii at 12:01 AM