My recipe this week for Tyler Florence Fridays is Fresh Pancakes Topped with Cheese: Cachapas, from the Food Network site (here). Cachapas are from Venezuela and are considered "street food", are usually made with ground fresh corn and mixed into a thick batter. Tyler's version uses just fresh corn, masa harina (meaning "dough flour", the ground corn flour used to make tortillas), and salt. Although the recipe just calls for cheese to top the cachapas with, I decided to make them more substantial and more of an entree than a side dish, by topping them with all kinds of good stuff. (And local too! In addition to the corn all the veggies, fruits and the cilantro are locally grown). 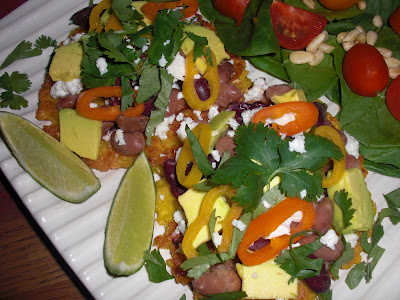 Scrape corn kernels from the cobs; run the back of your knife along the cob to extract all the corn liquid. Put corn into a food processor and pulse a few times to break up the kernels. Add masa harina and salt and pulse to incorporate. Heat the oil in a nonstick skillet over medium low heat. Divide the mixture into 4 and make 4 corn cakes. Cover and let the cakes cook for 5 minutes. Uncover the pan and carefully flip the cachapas over. Press on them with a spatula to flatten them a bit. Cook, covered, for another 5 minutes. Uncover and cook for about 5 more minutes; they should be a dark golden brown. 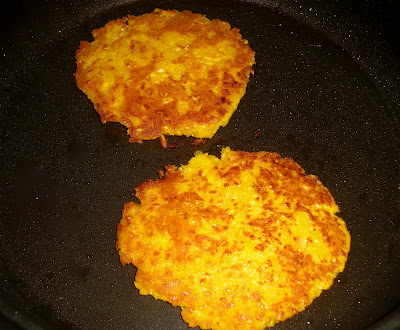 Top with the cheese and cover until the cheese has melted. Serve immediately. 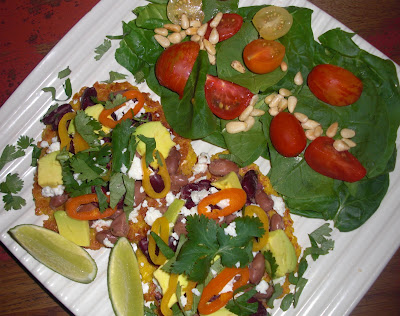 Note/Results: Really good! The cakes themselves are pretty mild, (in fact if you are not going to load them up with toppings, I would put some green chilies, green onions or spices in with the corn to liven them up). Also, I used Ewa sweet corn and the ears are smaller than standard corn so my proportions were a bit off and I got 2 cakes from 2 small ears of corn. I topped my cachapas with some spiced canned beans (I rinsed and drained pinto beans and kidney beans, put them in a pot to simmer with some vegetable broth, cumin and cayenne), cilantro, avocado, sweet little red and yellow peppers and some cotja cheese, (very similar in taste and texture to feta). Bright and colorful and served with a simple spinach and tomato salad with toasted pine nuts, it was a delicious, healthy meal. I would make these again. 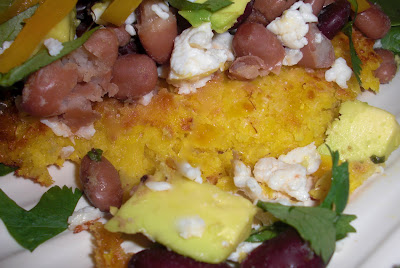 You can see what recipes our other TFF participants chose and what they thought of them at the TFF site here.
Have a wonderful weekend!
Posted by Deb in Hawaii at 12:00 AM