The Book Tour Stops Here: A Review of "Pieces of Her" by Karin Slaughter, Served with a Recipe for a (Ziploc) Thyme-Mushroom and Cheese Omelet

Happy (late) Wednesday. My new job and impending potential hurricane preparation have me running late for my review stop on today's TLC Book Tour. But, putting storm warnings and worries aside, I am very excited to be reviewing the mystery-thriller, Pieces of Her by Karin Slaughter and I'm happy to pair my review with a quick and easy (Ziploc) Thyme-Mushroom and Cheese Omelet, inspired partly by my reading. 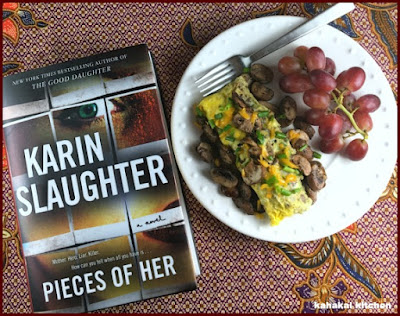 The #1 internationally bestselling author returns with a new novel in the vein of her New York Times bestsellers Pretty Girlsand The Good Daughter—a story even more electrifying, provocative, and suspenseful than anything she’s written before.

What if the person you thought you knew best turns out to be someone you never knew at all . . . ?

But all that changes when a trip to the mall explodes into violence and Andrea suddenly sees a completely different side to Laura. Because it turns out that before Laura was Laura, she was someone completely different. For nearly thirty years she’s been hiding from her previous identity, lying low in the hope that no one would ever find her. But now she’s been exposed, and nothing will ever be the same again.

The police want answers and Laura’s innocence is on the line, but she won’t speak to anyone, including her own daughter. Andrea is on a desperate journey following the breadcrumb trail of her mother’s past. And if she can’t uncover the secrets hidden there, there may be no future for either one of them. . . . 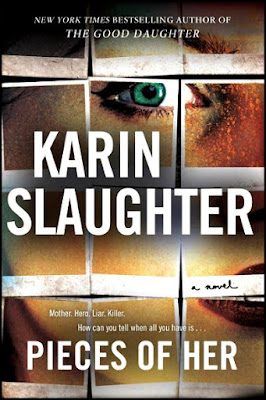 This is the fourth Karin Slaughter book I have reviewed on the blog and I have also been working my way through her Grant County series. I love her dark and twisty style of writing and the way she builds characters and build suspense. In Pieces of Her, the story alternates between present day--told from the point of view of Andrea (Andy), a meek and fairly immature woman in her early thirties and the past--thirty years prior, told from the point of view of Andy's mother, Laura. Laura is the character that drew my interest first--Is she an ordinary woman, described as "the cool mom" by Andy's former classmates and beloved by the patients she works with as a speech pathologist, or is she a killer or a criminal, running from her past? Andy was a slower build--I had to keep reminding my self that she was thirty-one and not in her late teens or early twenties with her lack of confidence and her milquetoast manner of getting through life. She did grown on me though and I found myself happy to be in either timeline as Slaughter skillfully unwound the secrets. I didn't find Pieces of Her to be as dark as some of Slaughters other books, although the darkness is certainly there, along with some graphically violent scenes. It comes close to 500 pages and although it starts with a shocking act, it takes time for the story and tension to truly kick in. Once it does, it becomes quite a ride with lots of plot twists and turns and it kept me absorbed in guessing how all of the pieces would fall into place. If you are already a Karin Slaughter fan, Pieces of Her will reconfirm it for you and if you are new to her work, you will want to read more of it after reading this one. 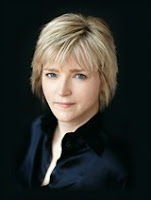 Author Notes: Karin Slaughter is one of the world’s most popular and acclaimed storytellers. Published in 120 countries with more than 35 million copies sold across the globe, her eighteen novels include the Grant County and Will Trent books, as well as the Edgar-nominated Cop Townand the instant New York Times bestselling novels Pretty Girls and The Good Daughter. Slaughter is the founder of the Save the Libraries project—a nonprofit organization established to support libraries and library programming. A native of Georgia, Karin Slaughter lives in Atlanta. Her standalone novels The Good Daughter and Cop Town are in development for film and television.

You don't read Karen Slaughter books for the food descriptions, but in Pieces of Her there was a very small amount of food to be found including eggs, spaghetti, a Filet-O-Fish, coffee, peanut butter, a PB & J sandwich with chips and a pickle, bourbon, chocolate, wine, potatoes, Slim Jims, hamburgers, tacos, pizza, beer, fried chicken with mashed potatoes, green beans and a cornbread muffin, vodka rocks, hot tea, a milkshake, celery, broccoli and other chopped vegetables in broth, and fruit. 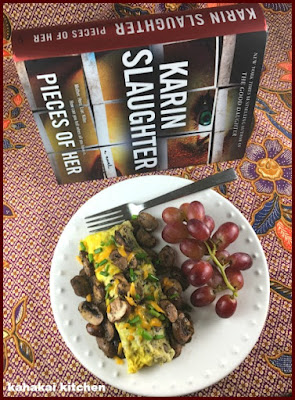 With those items to choose from and nothing immediately striking me I ended up going with eggs. At the beginning of the book, Andy and her mother are having breakfast and Andy is looking down at the yellow eggs on her plate. It wasn't specified what kind of egg she ate but, for some reason my friend and I were discussing eggs, or rather Ziploc omelets on the phone, as she asked if I had ever tried them. Apparently they have been around the intranet for years. She mentioned it was a quick and easy way to make omelets, especially for a group as you make each omelet in a separate sealable bag in a pot of water and I thought it sounded like fun to try. I'm not saying I don't have some small concerns about cooking in a plastic bag in boiling water, but it's been a crazy week and not having to put forth the effort to cook an omelet at the stove sounded good to me. ;-)

I had some leftover Thyme-Mushrooms (recipe below) and added chopped green onions and shredded the last bit of a brick of smoked cheddar cheese, but of course you can put in whatever you like. 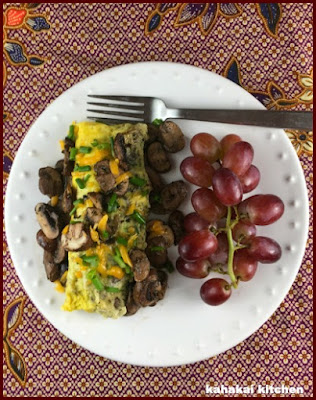 1 Ziploc or other sealable bag
2 large eggs
1 to 2 Tbsp of your favorite omelet ingredients, chopped or grated--I used Thyme-Mushrooms (recipe below), green onions, and smoked cheddar cheese
pinch of salt and black pepper to taste

Bring a large pot of water to a roiling boil.

Crack eggs into Ziploc or sealable plastic bag and mix them by squeezing and pinching the bag until well mixed.

Add your favorite omelet ingredients, salt and pepper to bag and gently shake the bag to mix ingredients together. Carefully squeeze all of the air out of the bag and make sure it is tightly sealed.

place the bag in boiling water and cook for 13 minutes. Carefully remove the bag from the hot water with tongs. Cut bag open and gently roll the omelet out of the bag and onto a plate. Top with additional toppings as desired and enjoy!
-----

Heat olive oil in a skillet over medium heat. Add the garlic and mushrooms and sauté until the mushrooms have browned--about 5 to 6 minutes. Stir in thyme and cook for another minute or so. Season to taste with salt and pepper. 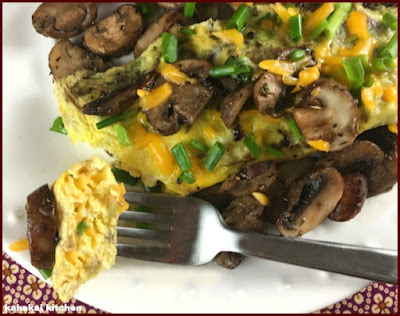 Notes/Results: Although the texture is not quite as fluffy as an omelet cooked up the traditional way, this recipe gets big points for simplicity. I could get the kitchen organized and my lunch packed for tomorrow while it merrily bubbled away, and it tasted great. I was impressed with how easily it came out of the bag onto the plate like a little burrito. It's prettier with garnishes on top--I used extra mushrooms, cheese and green onions. The beauty of these omelets in a bag is if you have many people to feed omelets to and don't want to stand at the stove cooking them--and the customization of course--as people can build their own. I would make them again. 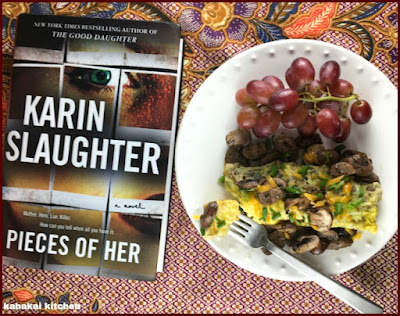 I'm sharing this post with the Weekend Cooking event at Beth Fish Reads, a weekly event that is open to anyone who has any kind of food-related post to share. For more information, see the welcome post. (Note: I'm hosting again this week--so look for the post here on Saturday!) ;-)

Note: A review copy of "Pieces of Her" was provided to me by the author and the publisher, Harper Collins, via TLC Book Tours. I was not compensated for this review and as always, my thoughts and opinions are my own.