I was craving a baked potato soup, fully loaded of course with those all-important toppings, but I wanted a healthier and preferably vegan version so I put this one together. I used both russet and Yukon gold potatoes and leeks and combined frozen cauliflower, coconut milk and nutritional yeast--blended up with some of the soup to thicken it and to give it a cheesy vibe. 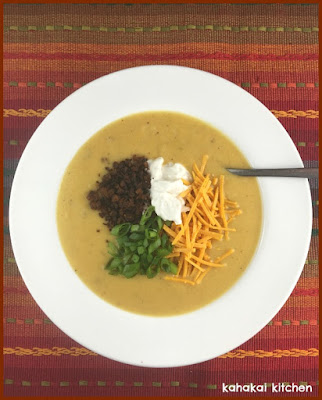 For toppings, I went with non-dairy sour cream, Diaya cheese-style shreds, green onions, and bacon, or rather 'fake-on' crumbles. I have been wanting to experiment with making my own vegan bacon crumbles and was torn between tempeh (a fermented soy product) and coconut flakes, but tempeh won out in the end. 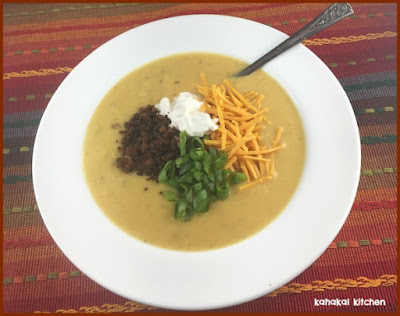 Heat the olive oil in a large heavy-bottomed soup pot over medium heat. Add leeks and saute for about 10 minutes--until leeks are soft. Add the garlic and cook for another minute. Add the dried parsley, celery salt, bay leaf, potatoes and broth. Bring the mixture to boil over high heat. Reduce heat to medium-low and cook, covered, for 15 to 20 or until the potatoes are tender. Remove the bay leaf.

Take two ladles of the soup and puree in a blender with the cooked cauliflower, coconut milk, nutritional yeast and coconut milk until smooth. Add the blended mixture back to the soup and cook on medium-low for 5 minutes until heated through. Season to taste with sea salt and black pepper. 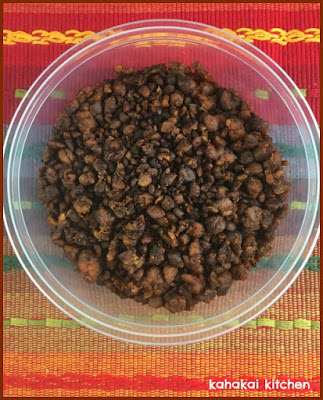 Tempeh Bacon Crumbles
Inspiration from from this recipe and this recipe

Slice the block of tempeh in half lengthwise, then into thin strips and then into small cubes, crumbling slightly with your fingers and them place in a gallon-sized Ziploc bag. Mix the other ingredients together and pour into the bag. Gently shake and 'massage" the bag so the tempeh is evenly coated with the marinade.  Allow the tempeh to marinate for several hours.

When ready to cook, drain the tempeh with a colander and pat dry with paper towels. Heat a large skillet over medium high, add crumbles and cook, stirring often for about 10 minutes until the pieces get crispy around the edges.

Use warm or allow to cool and keep stored in an airtight container in the fridge for up to a week. 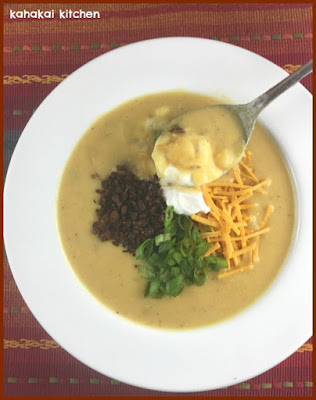 Notes/Results: I liked this soup--thick and velvety with a definitely cheesy vibe going on. I liked the different textures of the two kinds of potatoes and using the cauliflower to add nutrients, flavor and thickening. I think it has good flavor on its own, but add those toppings and we are in business. I need to experiment a bit more with the tempeh bacon. Flavor-wise I thought it was fairly spot on but I would have liked a crisper texture. I actually fried it a second time and that helped a bit but I may try to get the tempeh a bit drier the next time (why I recommend draining and patting it dry in the recipe notes.) I plan to play around with it and also try a coconut flake version to see if I like the texture better. But overall a success and it definitely hit the spot for my baked potato craving. 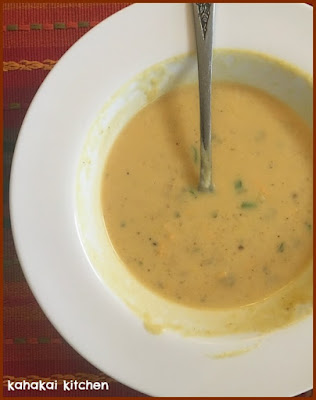 We have some great people and dishes awaiting in the Souper Sundays kitchen--let's have a look.

The Bearded Hiker joins us at Souper Sundays this week with Chili Cheese Dog Chili and said, "My wife was on Pinterest, looking at food. Typical. She spots this slow cooker chili cheese dog chili from 4sonrus.com. Hot dogs are not her number one food. Not even her #1000 food, but she knows how I love hot dogs. She shows it to me, reads the ingredients, and I’m so down. Let’s do this. So yeah, the original recipe is done in the slow cooker. Perfect! Just not for me, not on this day. I wanted it and I wanted it now!“No worries,” she says. “I’m gonna throw it in the pressure cooker and see what happens.” Rock on, so that’s what we did."

Kim of Stirring the Pot tried Ina's 16 Bean Pasta e Fagioli but didn't have a great result. She said, "This soup takes forethought, quite a bit of work, and results in lots of dirty dishes. No problem, right? After all, I love all the ingredients and this soup is definitely going to be great. Wrong. So wrong. I wish I didn't have to say this, but my soup was really mild. Way too mild. In fact, my husband's comment was "this has no flavor at all." I had to agree with him. ...this recipe is a no go for us. Don't be afraid to give it a try though because I know a few others who have really enjoyed it! But, do me a favor, soak your beans overnight!" 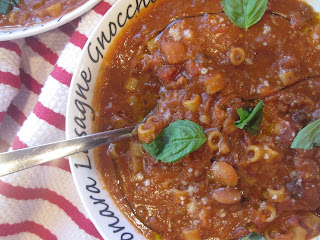 Tina of Squirrel Head Manor made Eggplant Sliders and said, "The lunch was meant to be eggplant sliders but I didn't' get to the grocery store for Hawaiian rolls. Those little things are so good. (Putting it on the list to look for a copycat recipe) We usually take our lunch as it's preferable to fighting lunch time crowds and also it's cost effective. Plus there are crazy holiday shoppers out there now and the traffic is maddening. Our workplace break rooms are blissfully quiet and empty this time of year."