The Book Tour Stops Here: A Review of 'Red Year" by Jan Shapin, Served Up with Radish & Egg Buterbrodik on Dark Rye with Anchovy Butter

On today's TLC Book Tour stop, I'm happy to be reviewing Red Year by Jan Shapin, historical fiction about a real-life female American journalist and set in China and the Soviet Union in 1927. I'm pairing my review with Russian buterbrodik--little canapes of dark rye bread, topped with anchovy butter, hard boiled egg, and radish slices, inspired by my reading. 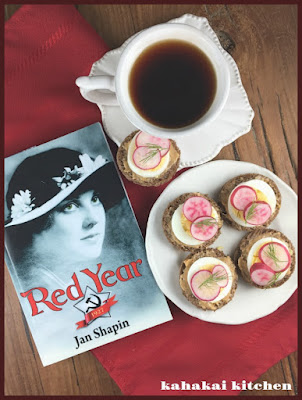 Can a red-haired woman from Chicago single-handedly force Joseph Stalin to back down?

China, 1927. Thirty-three year old Rayna Prohme, accompanying her left-wing journalist husband, becomes the political confidant and lover of Mikhail Borodin, the Russian commander sent to prop up a failing Chinese revolution. In a bid to continue their love affair, Rayna hatches a plan to accompany Mme. Sun, the widow of the Chinese revolution’s founder, to Moscow.

But Moscow does not welcome the women. Borodin shuns them. Rayna’s stipend and housing arrangements are cancelled. “Go home,” she is told. But Rayna does not want to go home to an ordinary life, to her husband and Chicago. Instead, she applies to a Soviet espionage school that soon demands she spy on Mme. Sun. The Chinese widow is, by now, in grave danger as her exit visa is blocked. Rayna must make a choice — Borodin and Russia or Mme. Sun and China. 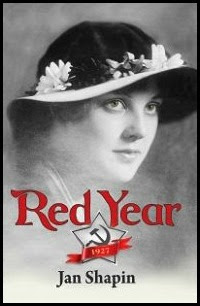 Red Year is an interesting look at what is probably lessor known history for most Americans--Communism, politics and revolution in China and the Soviet Union in the 1920s. It's a fictionalized account of a real person, Rayna Prohme, an American journalist who with her de facto husband, Bill Prohme, traveled to China, supporting the Kuomintang (National People's Party of China) and writing for their newspaper. While there, she became acquainted with and fell for Mikhail Borodin, a Russian agent for the Comintern, an international Communist organization and became friends with Madame Sun Yat-sen, widow of a revolutionary leader of the People's Republic of China. Needing a job and wanting to be close to Borodin (she calls him "Mr. Bee") Prohme travels to Moscow as part of the entourage and tries to get ito The Lenin Academy--a Soviet espionage school and finds herself torn between China and Russia.

I enjoyed much of the book, I love learning more about history and real people that are not normally in my radar. Red Year seems well researched and although liberties are taken to fictionalize history, the author did base the book's details on true accounts of the time and people involved. My one dislike was that I had a hard time connecting with Rayna and I like to connect with the characters I read about. Author Jan Shapin is a playwright and screenwriter and it comes across in this novel--it reads a bit like a play or a movie and that's not a bad thing, I just wanted more set up versus feeling like I was dropped into the story trying to guess what led up to the scene I was in. I do admire Rayna's bravery, spirit, and tenaciousness, but I was challenged by understanding her motivations beyond getting and staying close to Borodin (who seemed to mostly regard her as a fascinating inconvenience). How much of her motivation was to fight for a cause versus a strong attraction that she felt was love and/or as she thinks at one point in the story, "...a way to dispel her morbid fear of an ordinary life." Is she a heroine, or a woman wanting an adventure who got caught up in the turmoil of history--or maybe a bit of both? At the end of the day, I'm not sure I know the answer--and maybe I'm not supposed to know. If you enjoy historical fiction and find world history and politics in the 1920s interesting--especially in Russia and China, Shapin does an excellent job in portraying them and making them vivid and full of life. She has two previous novels--also historical fiction but set in different periods and places that I will definitely be checking out. 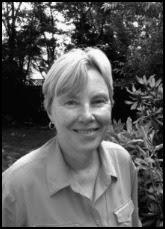 Author Notes: Jan Shapin has been writing plays and screenplays for nearly thirty years, in the last decade concentrating on fiction. Shapin has studied playwriting at Catholic University in Washington, DC, screenwriting at the Film and Television Workshop and University of Southern California, and fiction writing at a variety of locations including Barnard College’s Writers on Writing seminar, the Sewanee Writers’ Conference and Bread Loaf Writers’ Conference.

Her plays have been produced in the Northeast and Mid-Atlantic states. She has received grants from the RI Council for the Humanities and has served as a juror for the Rhode Island State Council for the Arts screenplay fellowship awards. Two previous novels, A Desire Path and A Snug Life Somewhere, were published in 2012 and 2014. She lives in North Kingstown, RI with her photographer husband. Learn more about Jan at her website, janshapin.com.

Since Red Year is set primarily in 1927 and times were a bit tough for many--including Rayna, I wouldn't call this the foodiest of books, but there was mention of food like: brown rice with cucumber slivers, "nasty fish," a pear, banquet food of duck, honeyed fruit, rice, and root vegetables, canapes of peanut butter and raisins, cheese, punch, tea and black bread, kishke, porridge, sticky rice cakes, pickled cabbage at a Japanese restaurant, ginger ale, fruit nectar, stale rolls and cold tea, sandwiches and fruit drinks, vodka and tinned sardines, a poppy seed bun, meat in cream sauce and carrots, kippers on crackers, cheese and smoked eel, potato and stewed greens, beets and mutton, cabbage, stewed fruit--plum and crab apple and brandy, scalloped potatoes, and tea with a dollop of jam. 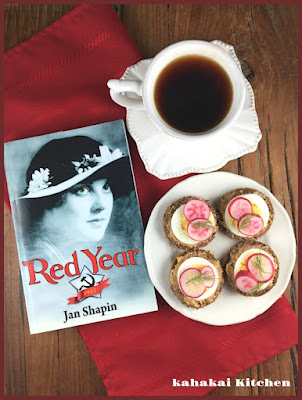 At a reception, Rayna is "...holding something made of egg and radish" and it is later mentioned as deviled egg, and later as on a cracker. I decided to keep some of those elements and make a buterbrodik--which is a two-bite version of buterbrodi, or Russian open-faced sandwich of bread spread with butter and different toppings. After just finishing Mastering the Art of Soviet Cooking by Anya Van Bremzen for Cook the Books, I had Russian food on the brain and made a variation of a buterbrodi to go with my okroshka (cold kefir soup). I had checked out a page of buterbrodi options in Van Bremzen's Please to the Table: The Russian Cookbook and two (pumpernickel rounds with anchovy butter, topped with thinly-sliced red radishes and butter pumpernickel rounds with sliced hard-boiled egg and an anchovy fillet) caught my eye and I decided to combine them for "something made of egg and radish." 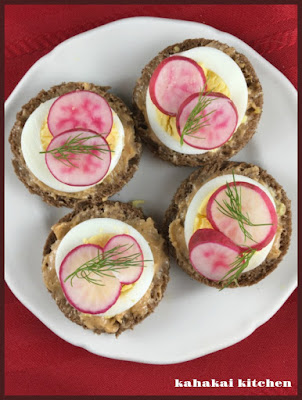 I found a recipe for Anchovy Compound Butter on Epicurious.com that I modified slightly to make my butter. It used diced anchovy fillets but rather than open a new can for the 1/2-stick of butter's worth I was making, I decided to used anchovy paste in a tube. I also added a bit of lemon zest and pickle juice and added in smoked paprika to the hot paprika in the recipe. My recipe is below, you can see the original recipe here. I served my buterbrodik with a cup of smoky Chinese Lapsang Souchong tea.

Anchovy Compound Butter
By Deb, Kahakai Kitchen, based on a recipe from Bon Appetit via Epicurious.com
(Makes about 1/3 cup compound butter)

Combine softened butter with other ingredients and mix a fork until smooth. Taste and add sea salt and black pepper to taste. Place in a serving bowl and chill slightly or transfer butter to waxed paper, roll into a cylinder, chill, and slice. 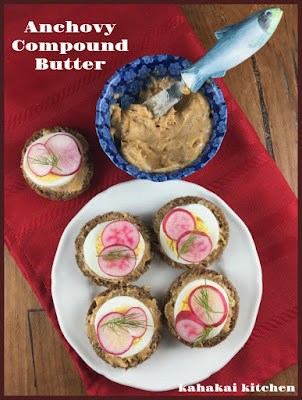 To make buterbrodik: Spread small pumpernickel breads, or rounds cut from a loaf generously with the compound butter and top with a slice of hard-boiled egg and thinly-sliced radish, adding a tiny sprig of dill to garnish. Enjoy! 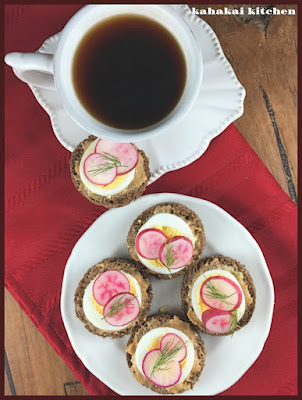 Notes/Results: If you are scared of anchovies (and I used to be), much like with a Caesar salad, you do not get a fishy taste from this butter--it just adds a delicious savory umami to the bread that goes well with the mild, creamy egg and the bite of the radish slices. Although minced anchovy would likely add a bit more texture to the butter and keep it a more yellow color, using the paste in the tube (easy to find in most grocery stores) is quick and easy and good for those who don't like to look at these little fishies ;-) and being a lazy girl when it comes to weeknight and humid weather kitchen time, I recommend taking the easy way out here. This is a tasty (and cute) little appetizer sandwich and this compound butter would have plenty of uses besides the buterbrodik or as a steak topper as recommended in the recipe. I made some grilled romaine lettuce the other day and I think topping it, or any grilled vegetable or greens really, would be delicious. It would also be nice on bread or potatoes, or even served to spread on raw radishes, or basted on grilled salmon. Mmm... I am a bit sorry (although my hips aren't) that I made a small amount--I will definitely make it again. 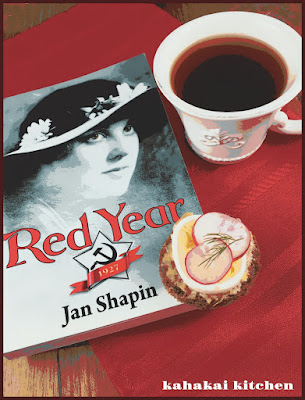 And since these are mini sandwiches, I am linking them up to Souper Sundays here at Kahakai Kitchen where every Sunday, we share soups, salads and sandwiches from around the internet. Here's a link to this week's post with details on joining in.

Note: A review copy of "Red Year" was provided to me by the author and publisher via TLC Book Tours. I was not compensated for this review and as always, my thoughts and opinions are my own.